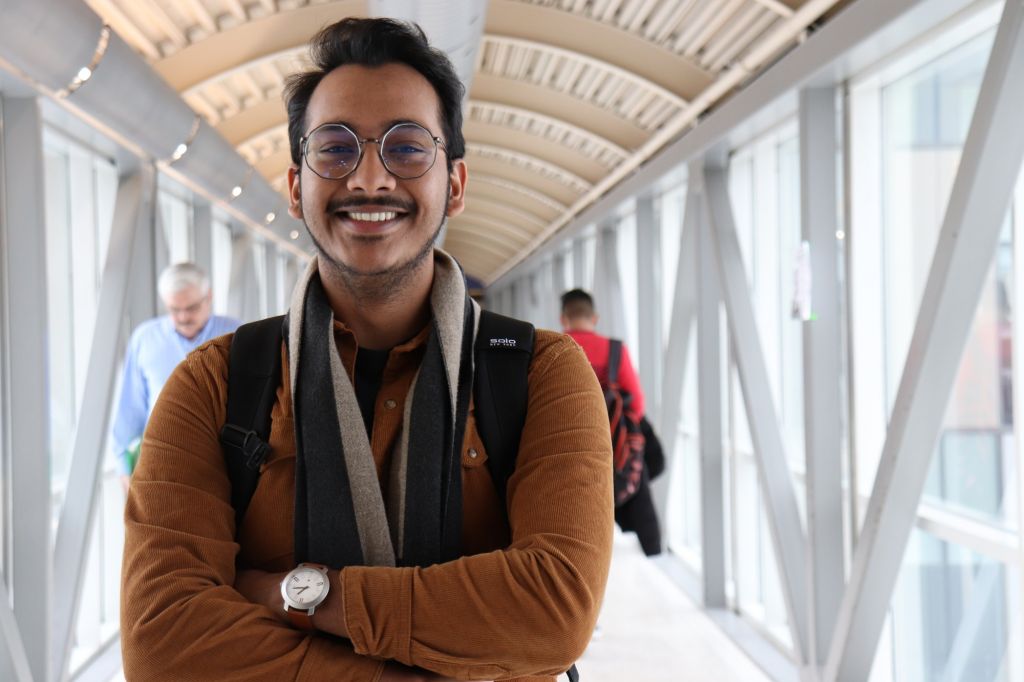 When Mohammad Udaipurwala, a scriptwriting student, wrote his 10-minute play Croquembouche last semester for a course, he scored a 15 out of 20.

“I decided the title Croquembouche last semester and orchestrated the play around it,” he said. “I thought since it is such an extravagant dessert, why not add exaggeration into the play as well?”

In the first show of 2020, Udaipurwala – who prefers to be called Mohammad – was one of 11 writers. The event also featured eight actors, along with the program coordinator Teri Loretto and artistic director Hannah Gibson-Fraser. The writers got a chance to get feedback from the audience between every six performances.

Croquembouche, the eighth play of the evening, was called the “golden hand in comedy” by a fellow student.

Mohammad, 21, came to Algonquin from Secunderabad, India to earn a post-graduation in scriptwriting and pursue a life in Canada. He graduated in literature, psychology and journalism from Loyola Academy in Hyderabad.

“Can you believe I travelled so far for self-expression, to express myself to people,” he said. “[I can] wear what I like, without being judged.”

Mohammad was unhappy in his early teens and always wanted to move into western culture. He wanted to become a part of a movement for his rights and “experience complete acceptance.”

For Mohammad, it was harder because of his community, “being Muslim and gay is harder than being just gay.”

Islamic laws are very strict and LGBTQ issues are often not discussed. This means it can be harder to address the situation in the community.

His father is a very religious man and has abided by the Islamic teachings all his life. This is why Mohammad has not yet talked with his dad about his sexuality. He has no plans to do so in the next few years.

“If he cannot accept me, it’s fine because I know where he is coming from and it’s not his fault,” he said. “But I hope he doesn’t think it’s mine either.”

He also faced challenges because of his religion. Being a Muslim is hard in India,” he said. “Especially when there are hate-crimes against them.”

His father gladly agreed to send their only son to Canada. “It’s an exciting place to be and has so many offers,” Mohammad said. “I might do event management after this course, in the college.”

Arwa Chavda, a 27-year-old interactive media design student, is the scriptwriters cousin and roommate. Mohammad is one of the most mature people she has seen, she says, and she wants to support him. She has helped him throughout his application process and his settlement in Canada.

He has fans in his class. “He is an incredibly sweet, smart and hardworking person,” said Liam Brian Kelly, 25. “I always have a feeling he knows more than we do in class and is way ahead of us.”

His professors are pleased with him as well. “He has managed to complete his internship hours already, months ahead of the deadline, and his supervisor on set told us they loved him and his attitude,” said Teri Loretto, coordinator of scriptwriting. “He worked on a Hallmark Film last semester.”

“This trip is as close as the scriptwriters can get to know how it works like in the real world outside our classrooms,” said Mohammad. “How the industry runs.”

“I never get tired with the course, I wanted this.”