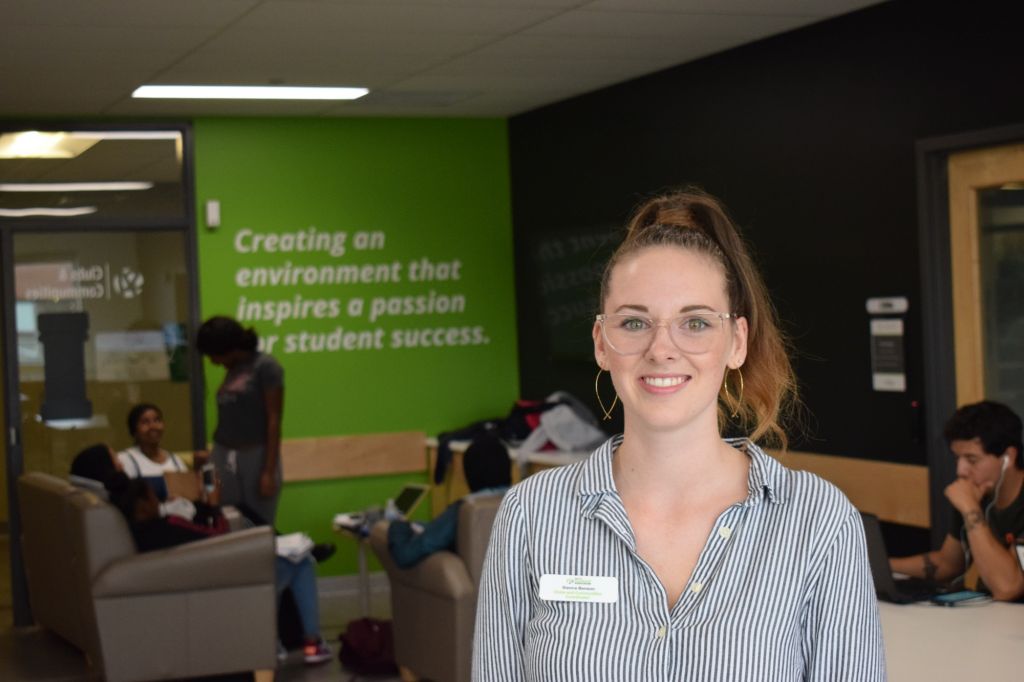 Sienna Benson, clubs and communities coordinator standing inside the Clubs and Communities room. Benson says the school was well prepared for cuts related to opt-out fees, despite the short notice.

With the initiation of the province’s Student Choice Initiative, which allowed students to opt-out of some ancillary fees, there will be changes to services offered by the Students’ Association.

However, staff say they won’t be as drastic as initially anticipated.

“Prior to the actual opt-out period happening we did a whole bunch of preliminary actions to offset whatever financial cuts might have happened,” said Deijanelle Simon, president of the Students’ Association.

According to the Tuition Fee Framework and Ancillary Fee Guidelines document released by the Government of Ontario for the 2019-2020 school year, colleges and universities in Ontario are required to provide students with the option to opt-out of fees deemed non-essential.

According to the document, anything outside of health and dental plans, student transit passes, and a series of fees called ‘essential services’ must be optional.

This meant that for schools, including Algonquin, students’ associations were on the cutting block.

With this in mind, Algonquin’s Students’ Association, began preparing in advance to minimize the effects of the new mandate on student life.

Simon explained that the Students’ Association was prepared for a larger number of students opting out as opposed to the numbers that are currently reflected.

“We planned for a 50 per cent opt-out,” she said. “We’re looking at about 15 [per cent], but we won’t know for sure because those numbers fluctuate a lot for the first month and a half.”

Simon also added that no services have been fully cut as a result of students opting out.

Although the number of students opting out of non-compulsory fees is expected to decrease the amount of funds available for clubs, Algonquin staff say the impact will be minimal.

“It’s just pretty much, the funding for students, to be able to use for their club, that’s the only thing that’s going to change,” said Sienna Benson, clubs and communities coordinator.

Benson also believes the school was well prepared for the cuts, despite the short notice before the cuts took effect, she added that the quality of services won’t be impacted.

“I think we’re in a great spot and I think services and everything like that will still be the same.”