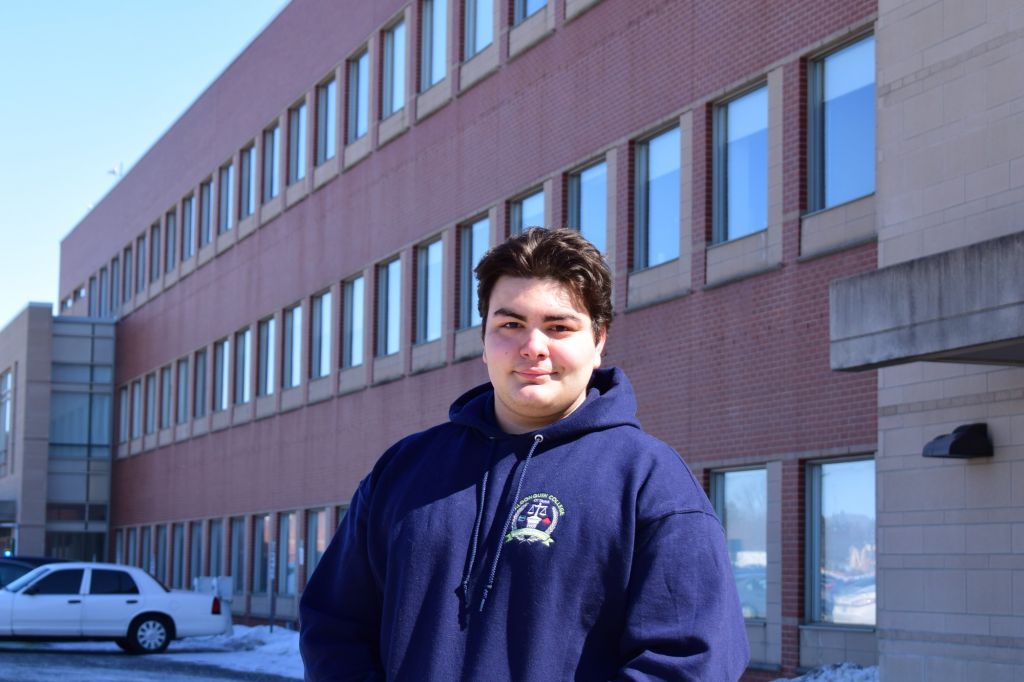 Jamel Hines, 18, was recognized as a Good Samaritan after he helped police track down the driver. Photo credit: Perushka Gopalkista

Jamel Hines, an Algonquin College police foundations student, stood alongside his mother at the bus stop when their day took an unexpected turn.

On March 21, Marc-André Fournier had been driving recklessly on the outskirts of the University of Ottawa campus before making his way onto the campus.

According to an Ottawa Citizen article published on March 21, the driver sped down Rideau Street in a reportedly stolen Dodge Caravan, and made his way into a lane against oncoming traffic. After driving on King Edward, the driver then made a right turn on Laurier Avenue East. The van seemed more out of control when he turned left on Cumberland, according to the article.

The vehicle ended up on the pedestrian walkway of University Private, where most students were in a panic trying to avoid getting hit.

After bolting through a red light on Marie Curie Private east, the van then broke down and the man exited the vehicle, covered in blood, as stated in the Ottawa Citizen.

Hines and his mother, who had plans to go shopping that day, were on Lees Avenue waiting with other passengers for their bus to arrive when they noticed the van near the construction site near Lees station.

“We heard a loud noise and I guess the tire had popped,” said Hines in an interview with the Times. “[The driver] stumbled out and he was walking around – and started going towards the road.”

Once the man got out of the vehicle, he noticed Hines had been filming him on his phone, and verbally threatened Hines.

“He saw me filming – gave me the middle finger and starts yelling,” said Hines. “I said, ‘If you’re going to kill me, then f**king do it,’” The man then walked away.

The man attempted to get onto the bus and shoved Hines’ mother out of the way, staining her favourite grey sweater with blood. Hines, along with other passengers, alerted the bus driver that the man should not be allowed onto the bus.

According to Hines, when the man got off the bus, he started walking up towards the intersection where the University of Ottawa and O-Train meet and couldn’t be seen.

Hines decided to stay on the bus – all while keeping a lookout for the man – and then got off at the next stop, which was at Lees. He noticed the man attempting to climb over a fence. Hines then crossed the street, walked towards the man and started filming him, where he was confronted a second time.

Sirens were heard and according to Hines, the man hid behind a structure.

Hines then flagged down the police as to where the man was hiding and was shortly afterwards, the man was arrested.

Hines said that it was definitely more of a rush to be involved in an incident like this.

He had previously been in the child and youth care program before switching into the police foundations program.

“I was less scared and more on edge — it was more like nerves then fear.”

Before police had collected his phone for evidence, he recalls seeing his phone “blow up” with messages from friends and past teachers.

He was tagged in several Facebook posts as well.

“I think what he did was amazing,” said second-year criminology and women studies student at the University of Ottawa Victoria Lopez, who is a friend of Hines.

“I was really shocked to hear he was a key part in taking down that guy because Jamel is a very calm and collected person, but I’m not surprised that he took action to stop the driver.”

Another friend of Hines was also surprised that he was recognized as a Good Samaritan.

“Jamel is a great guy,” said 18-year-old St. Nicholas student Dustyn Meagher. “Hearing that he went out of his way to make sure that the driver was caught, just shows that he’s a great guy and willing to go above and beyond.”

“I would consider, my friend Jamel as a hero,” said 18-year-old Algonquin student Zennith John Francia Merza. “He did not just watch what was happening, he reacted quickly and had the urge to help at the moment. I believe what he did was what a Good Samaritan would do.”

Despite all the recognition he received, Hines believed it was the right thing to do and was amazed by how quickly the word had gotten around.

“All I did was help someone. I don’t really know what would have happened if I wasn’t there.”

Marc-André Fournier is currently facing multiple charges including failure to stop at the scene of an accident and resisting arrest.