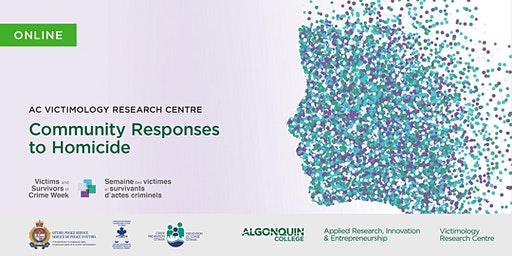 The event focused on one of their current studies: community response to homicide.

“This is a partnership between the newly formed Victimology Research Centre, the Ottawa Police and the Victim Crisis Unit, the Canadian Resource Centre for Victims of Crime and Crime Prevention Ottawa,” Roebuck explained. “We have such a great group of partners that have helped to put this on.”

The event was opened by Claude Brulé, Algonquin College president, who welcomed all the attendees.

“This centre is unique to Canada,” Brulé said. “The centre’s work produces groundbreaking research in its field in partnership with non-profit organizations and government stakeholders studying victimization and the experience survivors have with the criminal justice system.”

Algonquin College’s learners from the victimology program, police foundations program and community and justice services program have been using the centre as a resource. “These students perform the central role as they work on various research projects,” Brulé said.

The event had Roberta Della-Picca, an elder of the Algonquin Peoples and a recipient of the order of Ottawa for her work in advocacy and preventing violence against women, perform a greeting.

“This is funny because we are all in cyberspace,” she said. “But we are all on unceded Algonquin traditional territory.”

Dr. Roebuck also released a documentary film titled After Candace: The Art of Healing, which was one of the research centre’s past projects. The film captures the healing journey of Cliff and Wilma Derksen – survivors of their daughter’s homicide.

“Understanding the experiences of victims and survivors is exceptionally important work,” Brulé explained. “It can only lead to greater awareness and positive changes in our institutions and society in general.”

The Research Centre will also be focusing on three other studies: Victim Services and Vicarious Resilience, Male Survivors of Intimate Partner Violence in Canada and COVID-19 and System Responses to Homelessness.