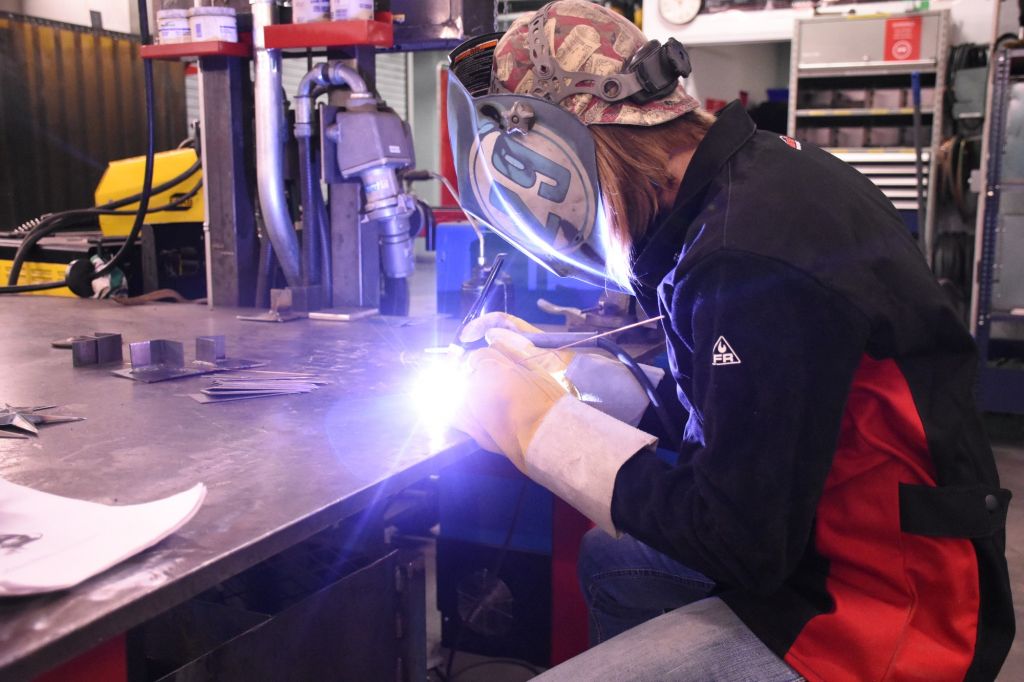 Professor Lydia Okum welds Christmas ornaments while waiting on her students to complete their assignments. The 2.6 million dollar welding lab at the college is truly state of the art. Photo credit: Jessica Alberga

When Keri Davey took the Introduction to Welding Program this past summer in the college’s multi-million dollar welding lab, one image got her through those first few intimidating hours.

She imagined a small piece or bead of sun in her hands. And she imagined waking up the entire universe by dragging its power and light across the sky.

Davey imagined this because the fear of the fire and power of the machine was all too real in those beginning days.

“The welding itself was actually terrifying the first day I almost went home twice,” said Davey. “I didn’t expect the spark in the ark to be such a terrifying thing.”

But she didn’t go home. In fact, Davey was one of 12 women who participated in the new program and now holds a Canadian Welding Bureau qualification in a fillet weld; flat position [the process of joining two pieces of metal together, whether they’re perpendicular or at an angle.]

Due to the lack of women in the trade, the federal government granted the Canadian Welding Bureau funds to put forth a new phase of social engagement, and so the Introduction to Welding Program was created. It’s a 30-hour all-expenses-paid program that is offered at six post-secondary institutions throughout Canada. Algonquin College was one of them.

In Canada, there’s a significant labour shortage, especially in the welding trade. And there’s less than 4.3 per cent of women in the welding workforce. Despite being such a small number, the women welders who compete in the Skilled Trades competitions frequently display higher performances over their male counterparts. 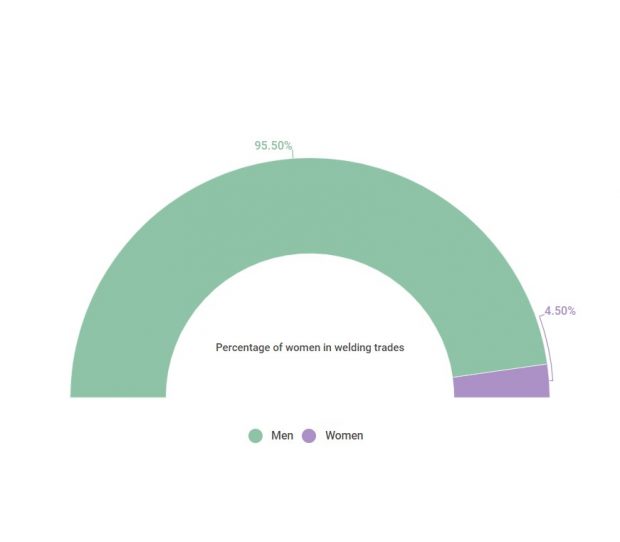 In total the initial program was open to 72 participants split up between the six partnered post-secondary institutions.

Shaun Barr, academic chair of construction trades and building systems at Algonquin, said that because of the federal push for more females in the trades, this campaign was launched.

“We have an excellent relationship with the Canadian Welding Bureau,” said Barr. “They donated funds to our $2.6 million welding lab that we built a couple years ago and they do all our testing and certification for our post-secondary students.”

The CWB supplied all the necessary equipment: gloves, helmet and coats. The students were required to bring their own steel-toed boots.

“If anyone would have ever told me that I had a welder inside me, I would have said ‘Oh yeah sure, that would be awesome,’” said Davey. 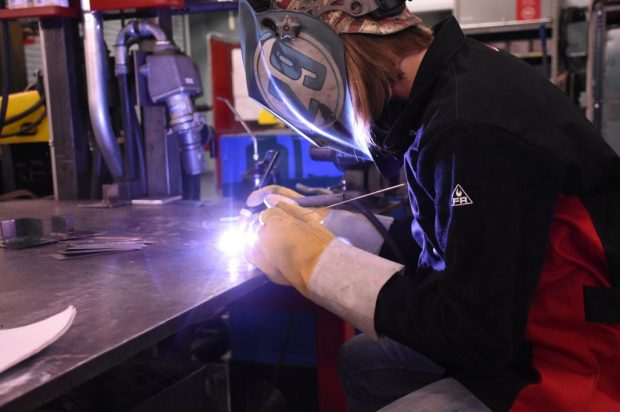 Once Davey developed a method of balancing the power of the arc she became more comfortable and really started to enjoy herself.

“I said to myself, ‘the spark is the opening note to the song, and you can’t have the music without the spark.'” 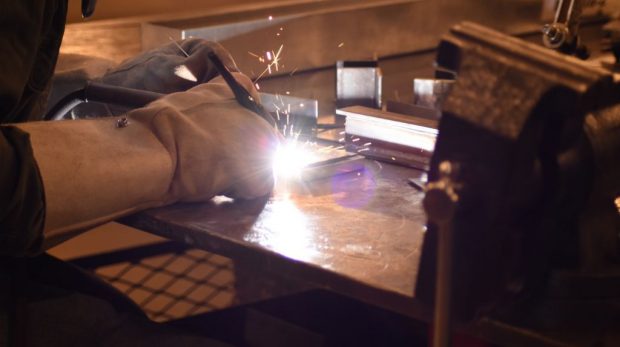 Each post-secondary institution was allowed 12 participants. Barr has a relationship with some of the people in Akwesasne Ont. and after pointing this program out to them, he was able to get nine interested women to join. The other four were scouted locally.

Having the other women around in the lab lifted Davey’s spirits whenever she’d feel overwhelmed or wanted to give up. The enthusiasm from others helped her push through.

“I don’t know if the dudes have that, I hope they do but that was really cool,” said Davey.

Barr said the program was a success and worked out really well overall.

He felt lucky to have met instructor Charlene Hayes at an educational panel in Vancouver before the launch. They were both at a conference for the Canadian Apprenticeship forum’s supporting women in the trades. After chatting briefly Barr hired Hayes on the spot, and just as quickly Hayes accepted.

“I love welding,” said Hayes. “I love the creative aspects of it, the challenge it offers the skill it takes to learn how to weld, and how amazing a finished product looks once it’s designed, built or repaired.” 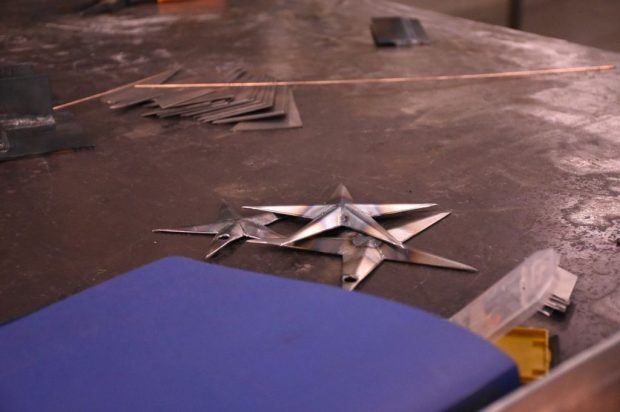 Hayes believes a career in welding can lead to many opportunities and would be a benefit for anyone willing to try something new and financially gaining.

“It is a very rewarding career,” she said. “Obtaining the skills and qualifications [Red Seal] to work in this industry will open doors not just in the welding industry, but also the opportunity to go to Teacher’s College and teach welding as well.”

For Hayes, the most rewarding part about that week was watching the women as they faced every challenge, and yet chose not to give up when it became too much. Hayes notes that their pride and confidence grew daily and she enjoyed watching how empowering it made them feel. 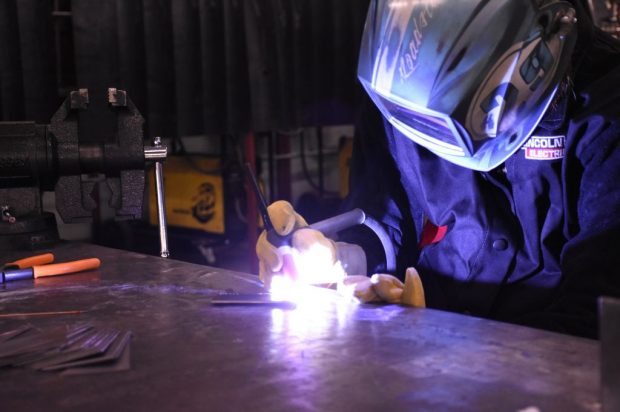 Once the inspector from the CWB evaluated and tested the women at the end of the week, they were each given a Canadian Welding Bureau qualification in a fillet weld, flat position.

The common assumption that welding is a male-dominated sector may still remain, but for women like Davey, that thought never stopped her. Even being a smaller woman and not necessarily all that physically strong, she was able to grasp everything like everyone else.

For now, Barr awaits the next launch from the Canadian Welding Bureau to host another round of female participants. Until then the post-secondary welding apprenticeship program is offered at the college and Barr says the enrollment numbers this year show a rise in females.

“The old stereotype of ‘it’s a man’s job, or it’s too dirty for a woman or they physically cannot do this type of work’ doesn’t fly any longer,” said Hayes. “Women are very capable and have shown that for centuries.”