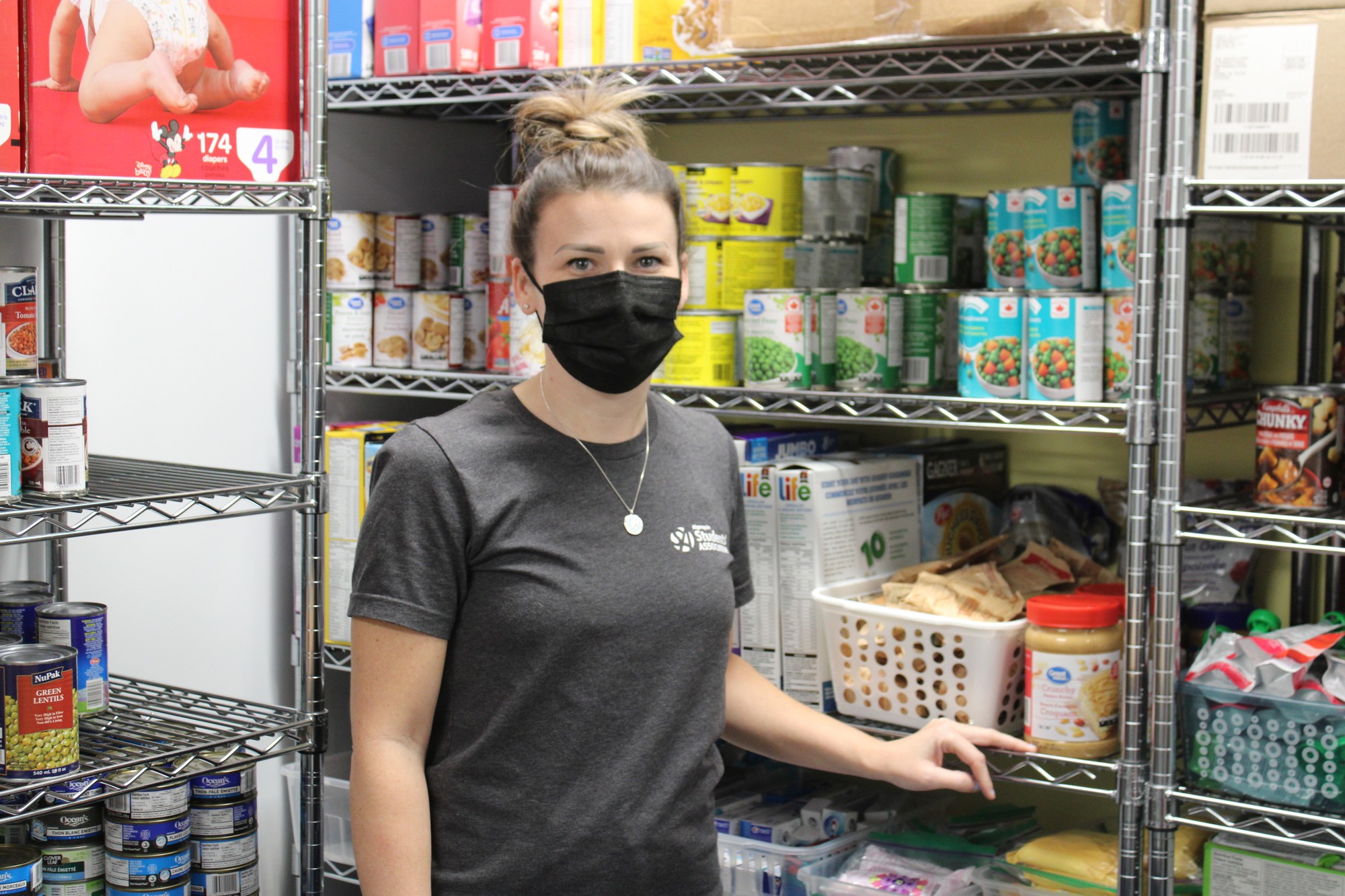 Jessica McCabe, food cupboard coordinator, is shown in the Woodroffe campus of AC.The shelves are full of food and other items for students to access if needed. Photo credit: Carol Goddard

The Algonquin Food Cupboard, funded by members of the Algonquin community and the Algonquin Students’ Association, seeks to provide students with access to food and necessities.

It is located in the Student Central in the basement of C- Building on the Ottawa Campus and open by appointment on Tuesdays, Wednesdays, and Thursdays from 8 a.m. to 3 p.m.

The food cupboard opened in December of 2014 as a response to student concerns about food insecurity which can be defined as not having reliable access to food.

This issue arose because of several factors including the cost of tuition, cost of housing and food, coupled with financial concerns. Skipping a meal, running out of money that was budgeted for food, or worrying about not having enough to eat are all ways in which food insecurity is manifested.

Hungry for Knowledge, a study that has investigated food security among post-secondary students, was conducted across five Canadian university classes and found 8.3 per cent of students in the study had encountered severe food security, 30.7 per cent had moderate food security with 61 per cent not facing this issue.

“The Students’ Association board of directors recognized the need for a food bank on campus,” said Jessica McCabe, food cupboard coordinator at AC, when asked why the Food Cupboard began.”The food cupboard has been a recipient of support from the community and members of Algonquin College staff since it began,” she added.

McCabe continued how the need for food cupboard resources vary between accessing its resources on a monthly basis or only once or twice a year such as waiting for Ontario Students Assistance Program funds to arrive or upon returning to college after the holidays.

McCabe commented the food cupboard can provide its clients with access to resources available at their local City of Ottawa Food Banks and works with Period Packs, a local company “who have generously donated packs of menstrual products for students in need.”

As plans for a full return to students to campus, McCabe mentioned there may be an increased opportunity food cupboard fundraising activities, before mentioning a contactless food drive for the Algonquin Food Cupboard is planned for December 15 between the hours of 11 a.m. and 2 p.m. outside C-Building.

More information on the Algonquin Food Cupboard is available at www.algonquinsa.com/services/food-cupboard.