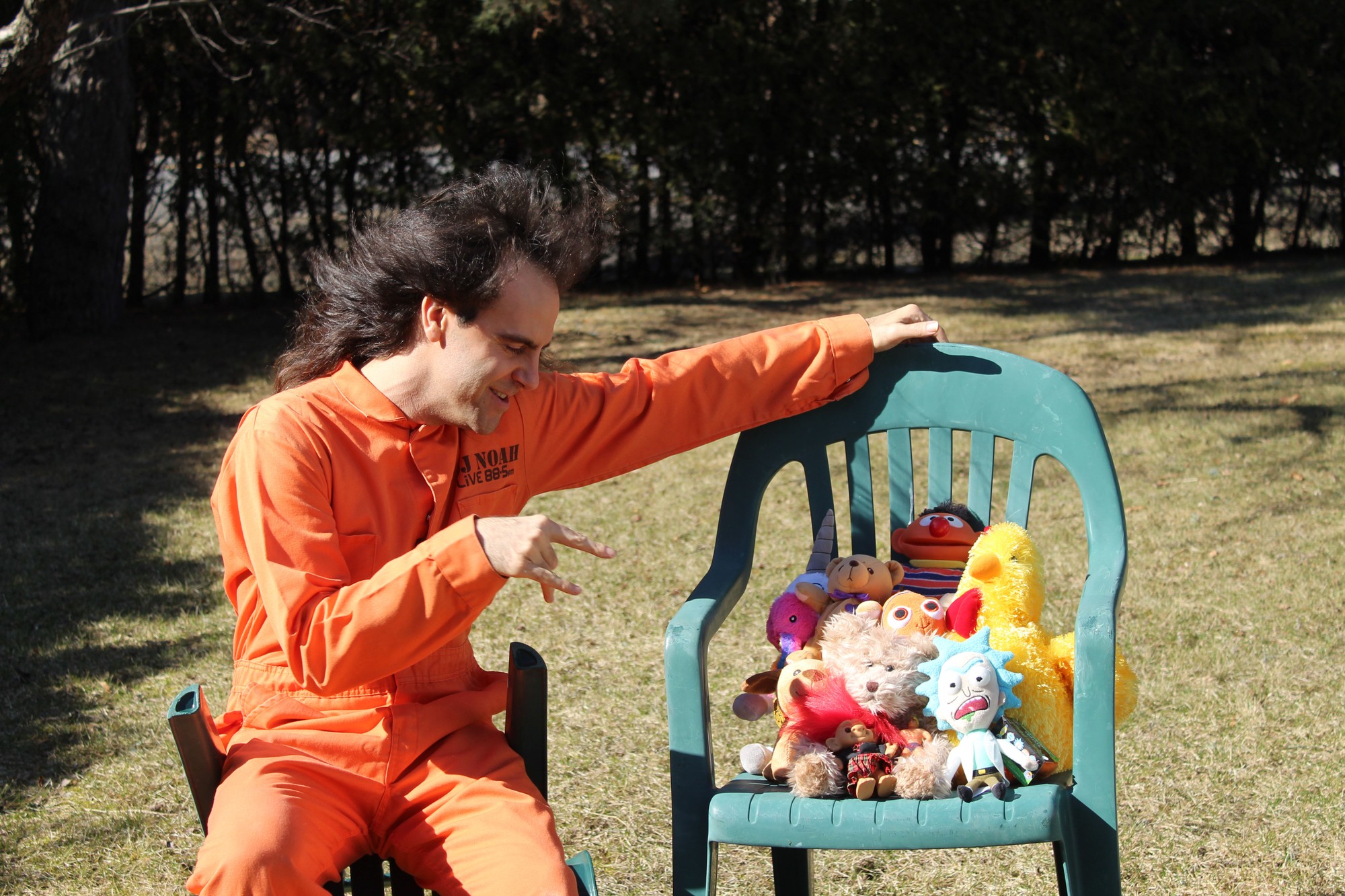 Noah Sabourin, also known as DJ Noah, spent the evening of March 7, 2020 rocking out in his famed orange jumpsuit at the Canadian Tire Centre during a Lumineers concert.

Little did the LiVE 88.5 FM host know that it would be last time he’d wear his orange jumpsuit — his DJ persona’s signature attire — in a public place for a long time.

Many Ottawans are familiar with DJ Noah. The Algonquin College radio broadcasting grad has been on-air with Live 88.5 since 2005 and is known for his Saturday Night Hard Drive live show. Transit signs and billboards around the city advertising LiVE 88.5 feature Sabourin in an orange jumpsuit with his long and unruly hair set free.

During the pandemic period, however, Sabourin’s orange jumpsuit has only been worn by the hanger in his hall closet. He may have developed an anti-conformist reputation through his Saturday Night Hard Drive show by doing things like hanging off of scaffoldings at music events, but over the last year of working remotely he has looked a whole lot like the rest of us.

Sabourin has only left his Findlay Creek home a handful of times. This has shifted his focus from being the life of the party to working tirelessly in his make-do home station.

“I haven’t had time off in over a year,” said Sabourin. “The last time I went on vacation, when I returned home, the whole world shut down and I’ve been a home-body worker bee ever since.”

While it may come as a shock to fans who are used to seeing him run around like a chicken with its head cut off outside of Ottawa Redblacks games, Sabourin’s remote work has highlighted how much behind-the-scenes work he does as both a DJ and music director for the station.

Sabourin graduated from the Algonquin College radio broadcasting program in 2003 and won the Top Overall Graduate award. Although this notable recognition is reflected in his day-to-day work, Sabourin says that his innate love for music is the main driving factor of his continued success in the industry.

“My first ever DJ gig was in the sixth grade,” said Sabourin, who grew up in Nepean. “I remember the buddy they assigned me to walk home with in elementary school was in the seventh grade and asked me to play some tunes at his birthday party because he liked my taste in music.”

That was the beginning of Sabourin’s 20-year career in radio. He biked over to his friend’s birthday party with a boombox and some CDs packed in the basket attached to his two-wheel ride.

Since then, Sabourin has worked jobs that have ranged from running his own mobile DJ company to helping launch CHIN FM as a producer in 2003.

His first 10 years in the industry included mostly work as an operations technician and producer, which eventually led to him helping with the launch of LiVE 88.5 in 2005.

“I remember showing up to our first LiVE 88.5 meeting in what resembled a broom closet on Merivale Road, not knowing what I was getting myself into,” said Sabourin. “I’ll never forget when I walked into the office and saw a familiar face that got me so excited to be on board.”

That familiar face belonged to Jen Traplin, the daytime host for LiVE 88.5. Traplin and Sabourin have been friends since their time together in the radio broadcasting program at Algonquin College. Watching Sabourin grow over the years, Traplin says, has been mesmerizing.

“I remember Noah being this insane ball of energy and hair from day one and everyone loved him,” said Traplin. “He radiated so much positivity and that hasn’t changed — he is legitimately and authentically this beautiful life force.”

Traplin has been a witness to Sabourin’s growth with the radio station for the last 16 years and could not imagine LiVE 88.5 being as successful as it is without him.

“He doesn’t expect accolades or adoration for the work he does,” said Traplin. “Most stations don’t have music directors around anymore, but he’s so much more than that. He is the bloodline of the station and an unspoken hero.”

Sabourin not only ensures that the station is abiding by Canadian content regulations, but he spends sleepless nights researching new Canadian artists and queuing up fresh music for LiVE 88.5 listeners.

When he’s not doing that, he can be heard on Saturday nights from 8 p.m. to midnight DJ’ing the Saturday Night Hard Drive, and on Thursday evenings running the New Spin segment. He also fills in for daytime hosts whenever need be.

“A lot of people think I don’t know how to manage my time well, which they might be right about,” said Sabourin. “I try to be available for my coworkers whenever they need me, which is why I don’t sleep much, but I love every second of it.”

Traplin has a deep appreciation for her mutually beneficial relationship with Sabourin and believes that he has helped her grow as a radio host beyond her wildest dreams.

“He is way more of a teacher than he will ever know, even though he second-guesses himself a lot,” said Traplin. “I don’t know what I would do without Noah. Just knowing someone like him, who is a constant support system, improves your life.”

Sabourin continues to be an important of the operations at LiVE 88.5.

Based on the experience and knowledge he came into the station with, he has pioneered a path for himself that may never exist in the context of another radio station.

“I don’t feel like what I do is more than what anyone else here does, we’re like a band of hardworking people,” said Sabourin. “I do this job because I love it — I always have and I always will, because this station is a part of my heart and soul.”