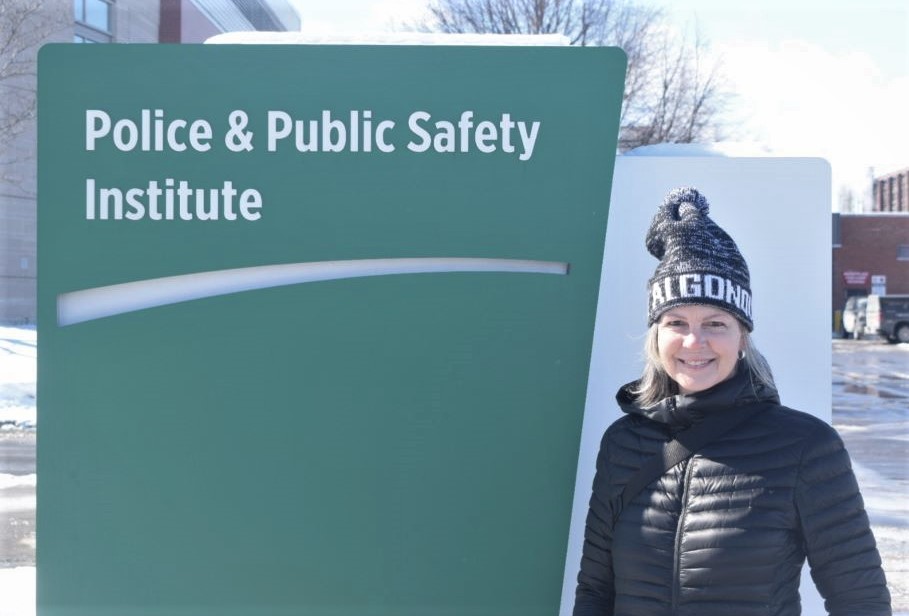 Every Thursday Brian Kovach and his Siberian Husky go to shelters including the Shepherds of Good Hope, the Ottawa Mission, Cornerstone for Women or the Veterans’ House to volunteer for Love on a Leash, a non-profit organization providing emotional support to people through pet therapy.

“Doing that really allowed me to expand on being able to communicate with the general public and people I do not know and engage in conversations with people,” said Kovach, a second-year police foundations student.

Kovach’s program has put an emphasis on teaching students how to work with the community.

“Your words are the most powerful tool you have as an officer. You want to talk because that’s the best thing. You do not want to have a physical struggle with anybody, nobody wants that to happen.”

Following the murder of George Floyd in May 2020, where former Minneapolis police officer Derek Chauvin kneeled on Floyd’s neck for over nine minutes, the “defund the police” movement and changes to police reform have gained popularity in jurisdictions across Canada and the United States.

There have been many changes to law enforcement since. Many police departments in North America have received budget cuts and there have been changes to use of force rules, including bans on chokeholds. There have also been efforts for increased transparency between police services and the public.

The police foundations program at Algonquin College has made changes of its own. The program has placed an increased priority on students interacting with the community and volunteering.

Although being delivered remotely since March 2020, police foundations have added and adapted courses to reflect this.

“The program has always been progressive and forward-looking, focusing on contemporary trends, and certainly human rights and freedoms and protection thereof,” said Jill Reeves, a police foundations professor, in an email to the Algonquin Times.

“In the Fall of 2021, we brought in a new program of study which reflects current trends and goals in law enforcement. We included more fitness time for students to contribute to wellness, included new courses like Victimology and Community Service and modified police powers to include a focus on ethics, professionalism and the law.”

In addition to the recent changes to the program, police foundations have integrated the Charter of Rights and Freedoms into all levels of the program and have always had courses that highlight public accountability in law enforcement such as diversity in Canada, conflict management, psychology and sociology.

“These courses strike a good balance between hard skills (investigations, interviewing, legislative based courses) and social science/theory courses leading to well-rounded candidates for hire in a variety of fields,” said Reeves.

The Ottawa police are a progressive service and have led the way for changes in policing policies for many other police services, said Keen.

“When it comes to harassment policy or equity, diversity and inclusion policies, we are way ahead of the game, and those policies were either already developed or were in the process of being developed before any incidents or anything like that occurred,” she said.

The 37-year-old Kovach enrolled in police foundations after being laid off from his job as a cook at Algonquin College to pursue a career in policing. Now, he and his fellow students are learning skills in de-escalation, use of force rules and interacting with people who are mentally unstable.

Kovach feels police are sometimes generalized by the public. “We should not judge a whole group of people based on a person or couple people’s actions,” he said.

Kovach wants to make a positive impact on communities through police work. “I feel like I can make a difference. I feel like I might be a suitable candidate and I have good intentions,” he said.

Police Foundations is a popular field of study at Algonquin College with over 400 students currently enrolled in the two-year program at the Ottawa and Pembroke campuses.

“Hiring rates in law enforcement fields increased creating more opportunities over the past five years,” said Reeves. We expect this trend to continue as we come out of the pandemic with opportunity in policing, security, corrections and border services.”

Non-commissioned police officer jobs in Ontario are projected to have 7,001 to 8,000 job openings between 2021 to 2025 with an 11.1 to 12 per cent growth rate, according to Ontario’s Ministry of Labour, Training and Skills Development.

Although there is a growing demand for police officers in Ontario, many graduates of the program will not enter a career in policing.

“There are many fields of law enforcement and justice where our students are employed, not just policing,” said Reeves. Over the past five years, hiring in all agencies has been strong. We have graduates in all levels of policing, by-law, special constables, corrections, border services, security and inspection.”

Other graduates will stray from the law enforcement field and choose to further their education, work in social service or find roles working for non-profit organizations.

“Some students go onto university in areas like law, psychology, criminology, emergency management and victimology,” said Reeves. “Many will work in areas where they perhaps began volunteering like grassroots, helping agencies like Children’s Aid, Distress Centre, Shepherd’s of Good Hope, the Mission and any of the local community housing facilities.”