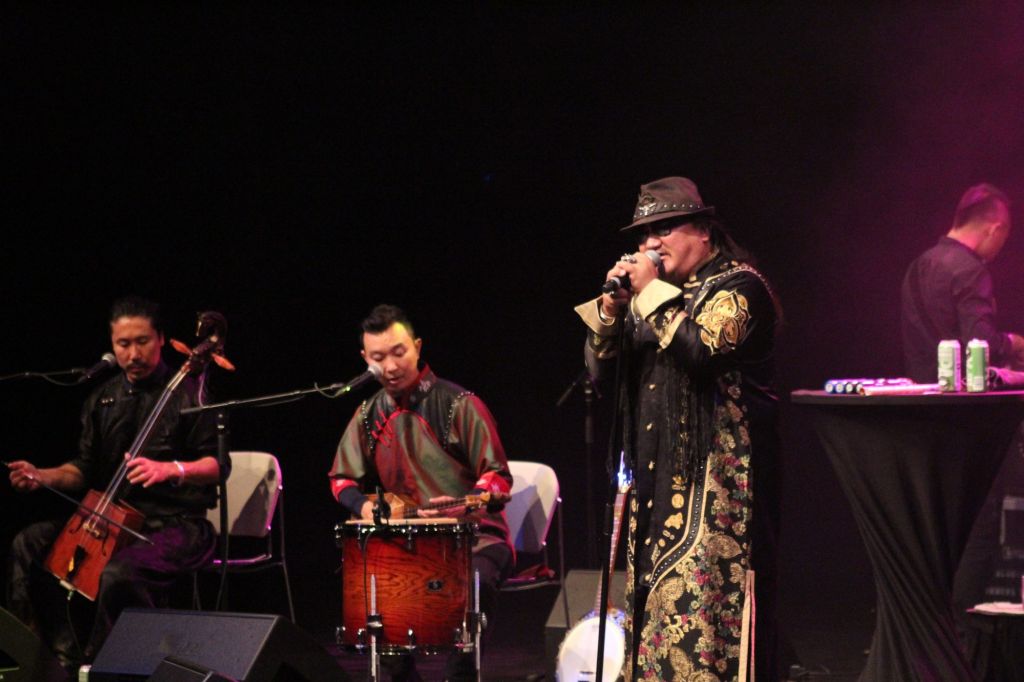 Dressed in black, fringed Mongolian coat with carved patterns all over it, Richa Hu holds the jaw harp to his mouth as his fingers flicker on it, and what comes out is the rhythm of a folk song from his prairie home.

The exotic tune played by Hu was accompanied by the powerful sound of electric guitar, the soft melody of morin khuur (a Mongolian folk instrument), and the cheers of the audience that almost overwhelmed the performance on the stage.

Hu and his band Hanggai are the champions of one of the most famous Chinese talent shows in 2015. They have brought a performance that was combined with Mongolian folk music and rock music to audiences in the Ottawa region. It was held in Algonquin Commons Theatre on Sept. 18.

“Coming here to the live show is a different experience than watching their music videos on YouTube,” said second-year computer programming student Wilson Liao, who came to the event out of pure interest for the folk elements.

Others were intrigued by the combination of styles.

“My friends invited me to the event,” said Alex St-Louis, a music industry program graduate from Algonquin College. “Their mixed-use of traditional Mongolian folk instrument and hard rock was really catching my attention. I think no other band does that.”

Although some people were here to experience something they haven’t heard before, others were true fans of Hanggai. Colin Lariviere is one of them. He came all the way from Petawawa to the college, just to see Hanggai’s live show.

“I’ve been listening to Hanggai for like a year now. I’m really interested in folk music,” said Lariviere. “It’s a body of music that’s different from all the popular stuff we have today, like pop music.”

Before the show, the Times caught up with Hanggai to hear their story, along with as well as how they were able to go beyond cultural boundary to present both Mongolian culture and hard rock to people around the world.

When members of Hanggai first met each other in Beijing, they were just a group of hard rock enthusiasts with a similar background and the same love for music. When they started Hanggai in 2004, they had no idea that they would grow in popularity amongst international crowds.

According to Liqi Yi, leader and founder of the band, after the band released their first album Introducing Hanggai in 2007, they received widely positive reviews from international music media like Pitchfork. This gave them the courage to take further steps to perform abroad and gain more worldwide influence. Working with the Dutch company Earth Beat, Hanggai steadily increased popularity among European audiences.

They also worked with American banjo player and Grammy Awards winner Béla Fleck to explore their opportunities in North America.

It was the same year when they went on tour in Canada. They travelled to Toronto, Ottawa, and Montreal. The tour gave them the chance to learn from different cultures about different cultures, as well as how they can make global listeners embrace their shows.

“A lot of people think rock and traditional music are completely different things, but no, they can be merged into one body,” said Richa Hu.

Hu said the band had developed their own style that is completely unique throughout the music history of China.

“In our third album Baifang (Mongolian for “back to you”), we combined more than just rock and folk music,” said Yi. “We have also integrated reggae and Buddhist chanting.” Yi said those are the things they had never tried before, yet the new elements successfully expressed the homesickness they were trying to convey in the album.

That emotional shock is what goes beyond the cultural boundary. During one of their tours, Yi saw a young girl burst into tears when their performance reached the climax.

“That’s when you realize the cultural difference is not enough to stop the audience from diving into the beautiful experience of music,” said Yi.

Hu told the Times that the band members are looking forward to coming back to the college for another performance.

“We really want to share our traditional culture with millennials in a modern way,” said Hu.

Hanggai will continue their tour in New York City on Sept. 24.

Dressed in black, fringed Mongolian coat with carved patterns all over it, Richa Hu holds the jaw harp to his mouth as his fingers flicker on it, and what comes out is the rhythm of a folk song from his prairie home. The exotic tune played by Hu was accompanied by the powerful sound of […]

Dressed in black, fringed Mongolian coat with carved patterns all over it, Richa Hu holds the jaw harp to his mouth as his fingers flicker on it, and what comes out is the rhythm of a folk song from his prairie home. The exotic tune played by Hu was accompanied by the powerful sound of […]