You are here: Home / Entertainment / Life / News / People / Algonquin professor brings hope to the world through her art 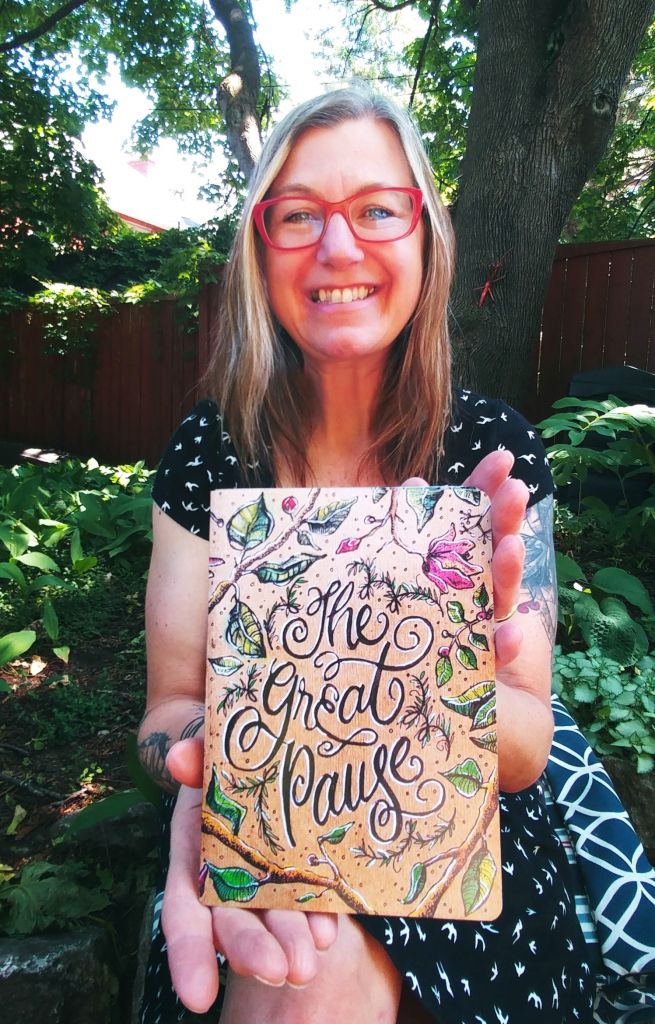 When the great philosopher Plato called art a mere imitation and the “greatest danger” for humankind, he wouldn’t have imagined, not even in his wildest dreams, that one day art would be a saviour, a creative way to cope during the tough times.

With the world in a state of confusion and chaos due to the Coronavirus pandemic, art has come to the rescue. All of us, in some way or the other, have consumed art during quarantine; some for sanity, and some to find happiness and hope. Madonna’s statement, “art can heal if allowed to exist,” never felt more true.

While everyone was looking for hope, Andrea Emery, a graphic design professor at Algonquin College, was busy creating it through art.

“My friend sent me a text message. She said she was having something sent to me but didn’t tell me what it was. Her message read, ‘I saw this and immediately thought of you,’ ” Emery said.

A week later, a small envelop arrived in the mail. It was a 5×7” sketchbook from the Brooklyn Art Library, part of “The Sketchbook Project.”

It was November 2019 when Emery received that message from her friend Laura Brisson. It would be a life-changer.

The innovative sketchbook project allows artists to order a sketchbook and fill it with their art. After completion, the sketchbook needs to be sent back to the Brooklyn Art Library, in New York.

Once submitted, the sketchbook is catalogued and becomes a part of the creative library.

One can also choose to digitalize their sketchbook. To create the digital sketchbook, each page is professionally photographed and added to the online digital library- preserving it in the virtual world forever and making it accessible to anyone around the globe. Since 2006, the library has successfully collected 36,000 artists’ books from more than 135 countries.

Emery, who thrives on art and doesn’t remember a time when she wasn’t drawing, painting or sewing, couldn’t think of any ideas to fill the sketchbook when she received the gift that November.

By March everything turned upside down.

During the start of the pandemic, Emery began noticing how her friends used their time in isolation. She also read an article by the American film director Julio Vincent Gambuto where he described the pandemic as “The Great Pause.”

Gambuto suggested using this period to rethink what was important to us. This idea struck Emery and she used it as her inspiration and the title of her book. 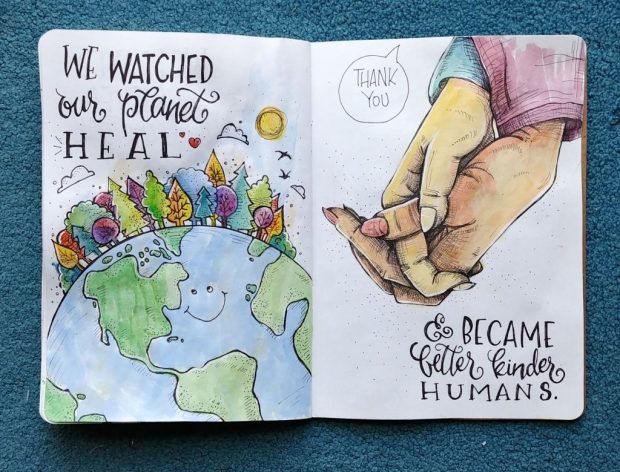 “I started to draw pictures of things we were doing: making bread, cooking, making and wearing masks, working from home, gardening. All these interesting things,” she said.

Just like everyone else, Emery was going through a low phase during the quarantine. To motivate herself, she began uploading her work on social media. This helped her complete the sketchbook by May. She also received an overwhelming response from friends and social media followers who asked her to replicate the booklet and print copies.

Reluctant at first and waiting for the long backlog of digitizing her sketchbook, she finally decided to print the booklet.

“The plan, at first, was to print 25 copies with four blank pages to be filled by the buyers. But when I told my friends about it, I had pre-paid orders for 200 booklets in just three days,” Emery said.

After making enough profit to cover the printing cost, she decided to get another 150 copies printed, this time donating the profit to Highjinx, a non-profit shop which helps the vulnerable in Ottawa. The copies were a hit and were sold out in under two weeks with many people buying the booklets as gifts for friends and family.

The Great Pause was shipped across Canada (Nova Scotia to British Columbia) and all over the world (Ireland, England, Germany, Spain, Indonesia, Japan). The final batch of 200 copies is up for sale on Etsy. 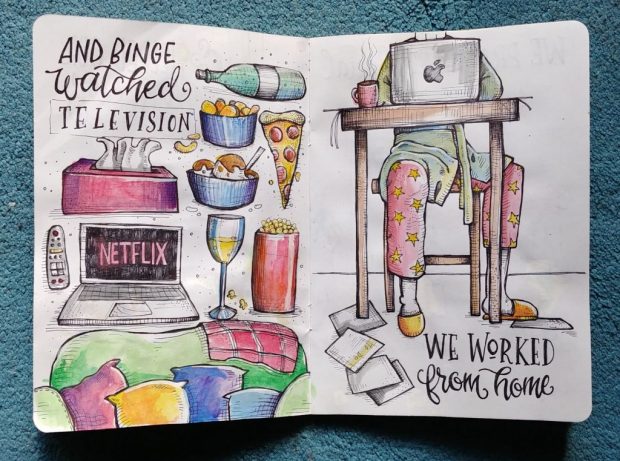 Overwhelmed by the response, Emery said: “I am honoured that so many people can relate to my illustrations and love my booklet. It makes my heart feel so good!”

Two weeks ago, Emery was informed her work will become a part of the City of Ottawa Archives Collection of COVID-19 objects, adding a feather to her cap.

“I am thrilled and honoured that my work will become a little part of history,” she said. “As far as I’m concerned, this is as close as I am going to get to having my work in a museum.”

Currently, Emery is waiting for her booklet to be digitalized at the Brooklyn Arts Library.

“It is a wonderful initiative and a great undertaking. I can’t wait to be able to visit the library and thumb through the sketchbooks myself,” said Emery. “I feel honoured to be included along with so many other artists from all over the world!”

Up and coming artists can be a part of the worldwide initiative through The Sketchbook Project.

Check out some of Andrea Emery’s artworks on Instagram.

Algonquin professor brings hope to the world through her art Reviewed by Kavya Nair on July 21, 2020 .

When the great philosopher Plato called art a mere imitation and the “greatest danger” for humankind, he wouldn’t have imagined, not even in his wildest dreams, that one day art would be a saviour, a creative way to cope during the tough times. With the world in a state of confusion and chaos due to […]

When the great philosopher Plato called art a mere imitation and the “greatest danger” for humankind, he wouldn’t have imagined, not even in his wildest dreams, that one day art would be a saviour, a creative way to cope during the tough times. With the world in a state of confusion and chaos due to […]