Mission Possible: A Masterclass in Success with Peter Tilley 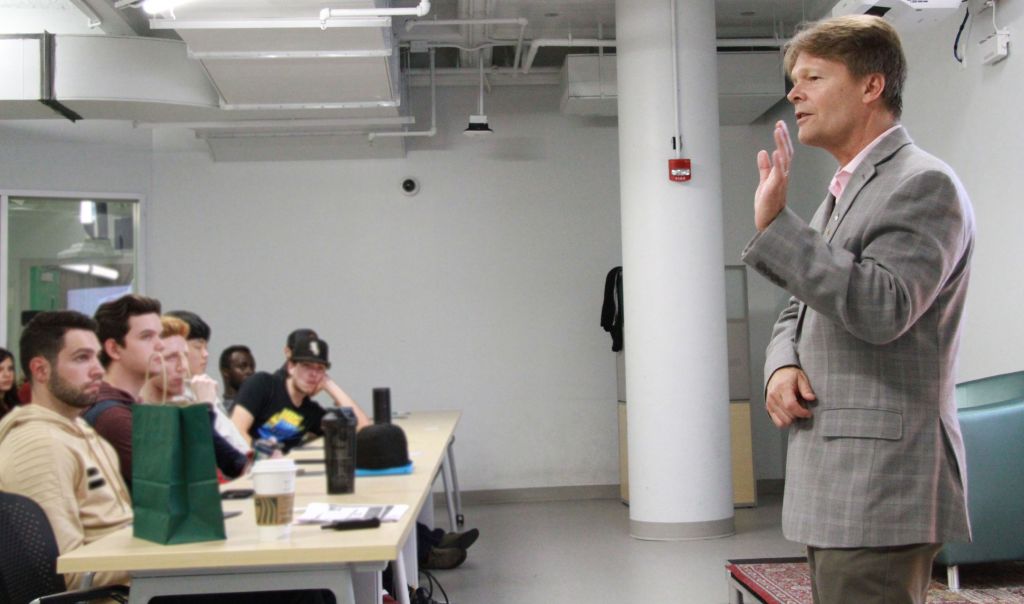 CEO of the Ottawa Mission, Peter Tilley, on Sept. 25, where he hosted a masterclass for success at Algonquin College's Dare District. Photo credit: Dana Simpson

A Sudanese child soldier, a Cameroonian soccer player and a Canadian welder walk into a building. It sounds like the beginning of a joke but it’s not. It is a list of people Peter Tilley has helped over the last six years as the CEO of the Ottawa Mission.

Help is a concept that Tilley knows all too well. “No one wishes to spend their days in a homeless shelter,” he said. But Tilley himself is familiar with the need for support having battled with substance abuse in his youth. People can fall on rough times. “I was an addict and I turned my life around,” Tilley said.

On Sept. 25, about 40 Algonquin students gathered in the college’s DARE District, in room C126, for a masterclass in passion and leadership hosted by the AC Hub. The event, which featured Tilley, was designed to inspire and inform Algonquin students to turn their passions into careers.

As an Algonquin College alumnus himself, Tilley demonstrated how he went from graduating in business administration management during the 1984 recession to making $60,000 dollars a year, 10 years later. And why, at the age of 34, he chose to drive a truck for $10 an hour with the Ottawa Food Bank.

“I did not let fear get in the way of my choice,” said Tilley. “It wasn’t so much a career choice; it was a choice of doing something I loved to do.”

And Tilley has done even more. Following his success at the Ottawa Food Bank which helped to increase revenue and food distribution, Tilley made the move to work for the Ottawa Mission. Here, he continued his passion for social change. When he began work with the Mission in 2013, the relapse rate was 60 per cent. Now, over 80 per cent of Mission guests are sober for one year or more.

One of these guests is Richard (a pseudonym used by Tilley during his talks). Richard came to the Mission a few years ago at the age of 57 following a history of sexual abuse, alcoholism, and five years on the street. And he still visits regularly. With help from the Men in Healing program and Addiction and Trauma Services, Tilley shared that Richard is back working in construction and has been sober nearly two and a half years.

And he is not alone.

Eric was a professional soccer player in his native country of Cameroon. Tilley mentioned that since Eric’s arrival at the Mission in 2013, he has worked with mental health supporters and the Royal Ottawa Hospital to escape his trauma. Healthier and happier, he has since gotten a job. Better than that – Eric recently became a Canadian Citizen.

Many Mission-goers have had success in the program. Several others, like the Sudanese former child soldier Tilley mentioned, are still struggling. But, as Tilley said to Algonquin students, it is most important to “always find a mentor.”

Whether struggling with addiction or a career, Tilley stressed that if you want to be successful you must always seek out the right people and “don’t be afraid to keep looking for your dream at whatever age.”