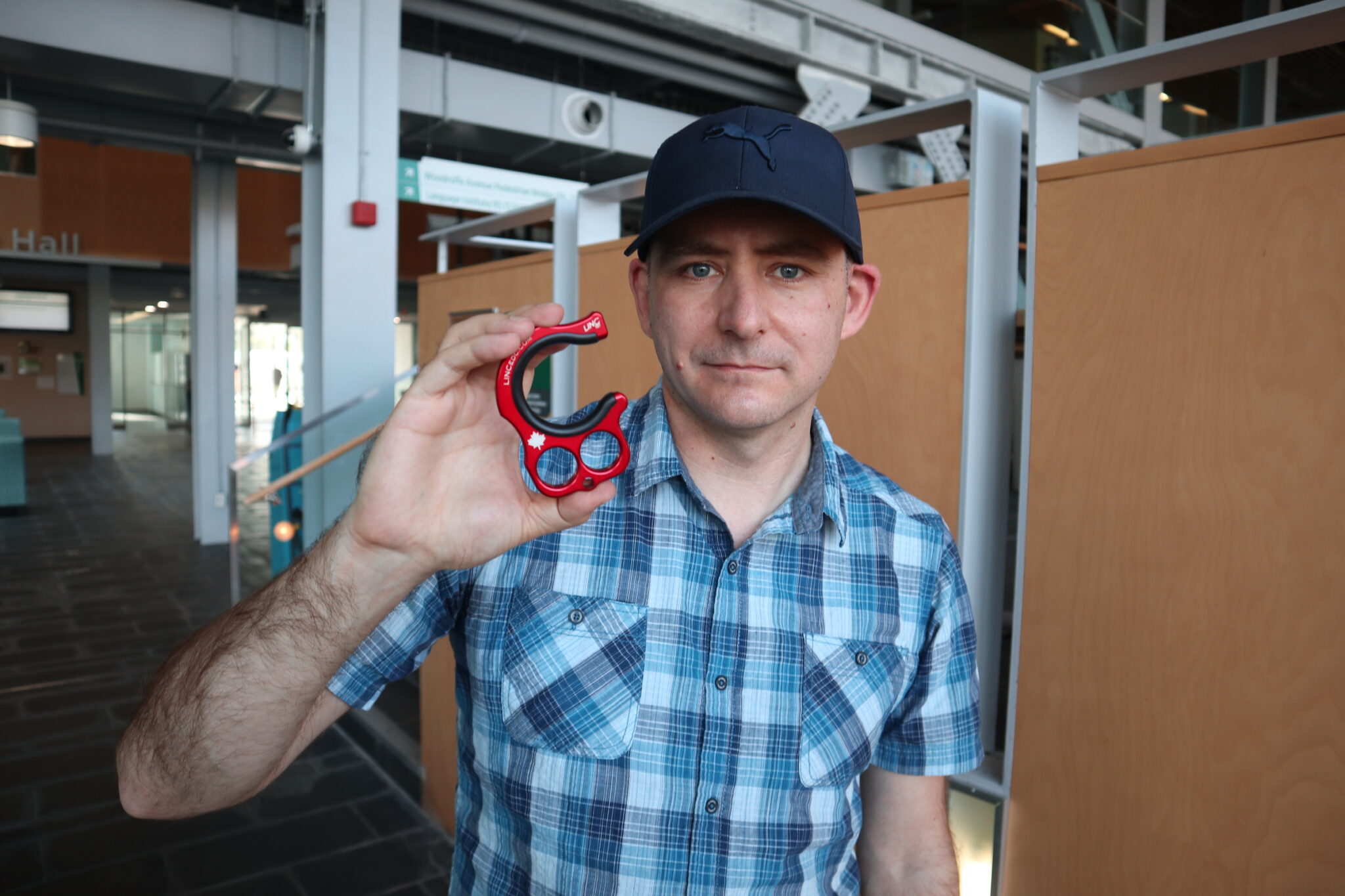 Called the Linc, the tool allows users to turn doorknobs, press buttons, pull/push or hold onto handles and even use their smartphones so they don’t have to get in direct touch with unsanitized objects.

Crosby, a Computer Numeric Control machinist, explained that the Canadian-made product is durable, can lift to 125 lbs and the material prevents microbial growth from spreading on the tool itself.

“No other tool in the market can tackle the round style doors like Linc,” said Crosby. “It’s completely made in Canada and designed with your safety in mind.”

With an ambition to help people stay safe during the pandemic and create job opportunities, Crosby, with his partner Karl Miller invested all their time and savings into creating this product.

The idea struck Crosby in April when a colleague mentioned that their company, Excel Precision Machining, needed a product of their own to survive the uncertain times.

“It seemed farfetched in the beginning but it got my mind thinking,” said Crosby. “I originally had an idea for a reusable mask to which I immediately bought a 3D printer to start building. While doing my research on masks I came across a product that screwed onto a latch style doorknob so you can open it with your arm. I liked the idea but the product had several limitations.”

Karl Miller, president of Excel Precision Machining calls Linc a practical tool that “seems to be right for the times.”

“I believe this product is an excellent tool to go along with other Personal Protective Equipment to help mitigate the risks we face in our daily lives,” he said.

After countless hours of researching, designing and then redesigning, creating prototypes, blueprints and several sleepless nights, Linc was born. But that was just the beginning, after creating Linc, the main goal is production and selling to the masses.

“We are currently running on Kickstarter, a crowdfunding page that allowed us to get our feet under us a bit,” he said.

With luck in their favour, Crosby told that his funding campaign was a success.

“We surpassed our goal of $4,500 in an astounding 16 minutes,” Crosby exclaimed.

“Apart from the regular use, Linc has also helped me carry grocery bags without getting cuts on my fingers. Carrying Linc around makes my family and me feel safer,” he said in his email.

After overcoming the hurdles of choosing the right material that has the perfect grip, sensors, antimicrobial properties and getting funds, the next step for the company is selling.

The initial cost of Linc would be between $26-$35, with an aim to streamline production and bring the costs down in the near future.

“We will be adding Shopify and Amazon stores in October. We have started building distribution connections to bring this tool to the public,” Crosby added.