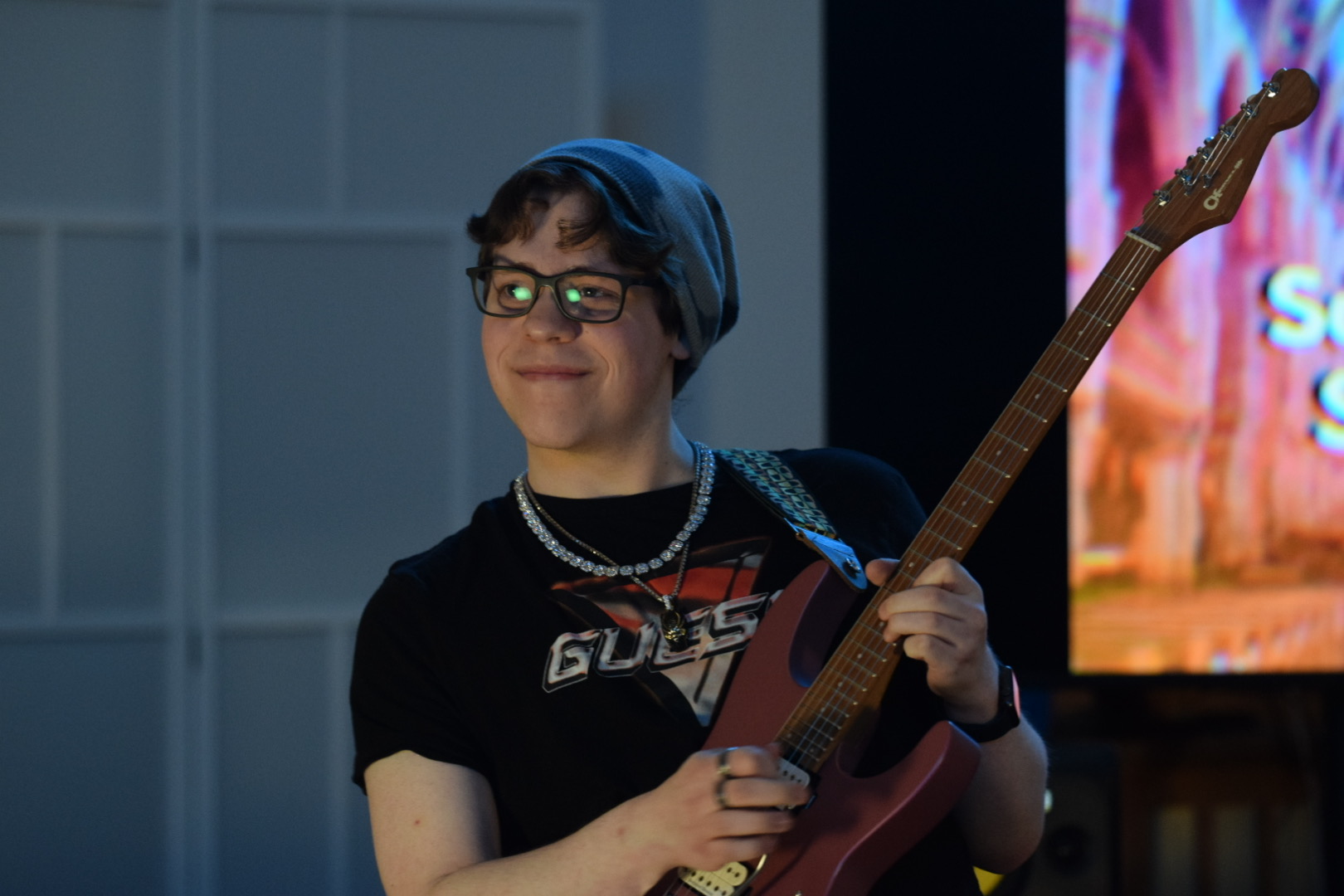 The usual sounds of organs and the harmonic singing of the choir at church were replaced with loud drums, guitar riffs, loudspeakers blasting heavy 808s and auto- tuned vocals on April 9 at Rothwell United Church.

As an initiative to raise funds and awareness for the Ukrainian refugee crisis as well as promote original music from emerging Ottawa-based artists, students from the music industry arts program at Algonquin College hosted a multi-genre concert called Saturday Service on a Twitch live stream.

The show spotlighted 20 performers, the majority being from the MIA program, varying in style from electronic dance music to ballads. The diverse group of Ottawa-based musicians featured over three hours of original music.

The stream peaked at 87 viewers and averaged around 65 people throughout the three hours. Now, the video recording of the stream on the Saturday Service Twitch channel has over 1,500 views.

After seeing the views on the Twitch recording of the Saturday Service hours following the show, an ecstatic Aidan Elliot-Perreault, 19, the head coordinator of Saturday Service, immediately jumped out of his seat and began calling his father, mother and younger brother.

“My idea worked, my idea worked,” he exclaimed with a shocked wide grin on his face. “How does this even make any sense?”

Although surprised by the overwhelmingly positive reception, Elliot-Perreault feels it is well deserved.

“I feel like it’s a testament to the talent of the artists. I just knew the fact that all this music is very very good and all it needs to do is just get out there, and I found an interesting concept to do it,” he said.

The initial idea for Saturday Service came about when MIA students Nathan Zinck, Aaron Crozier, Jack Abbott, Colin Bracken and Elliot-Perreault had to host a virtual event for a project in the concert promotion course. The group decided to take it a step further, organizing a full-scale concert, independent from the MIA program as a way to promote original music for artists in the MIA program or talent outside of the program.

“The original idea just came from a bunch of guys in a concert promotion class that just thought that we could do a show that could be bigger and involve a lot of people in the program,” said Elliot-Perreault.

Although the style of music was constantly shifting throughout the show, the organizers of the Saturday Service said it flowed well together.

From the fast, heavy hip-hop music, that made the crowd jump around and bump their heads, to the slow and angelic singer-songwriter music that made the crowd wave their arms in unison, the audience was always into it. With the changes of pace and energy the viewership remained consistent.

As for the venue, Elliot-Perreault’s father, Rev. Mike Perreault, is the minister of Rothwell United Church and was instantly on board with using the church as the main stage for Saturday Service.

And the free venue fit perfectly with Saturday Service’s goal of low-budget but high-quality events with a niche concept.

The group’s ambition for Saturday Service grew into a way to do good by raising awareness for those affected by the war in Ukraine.

“After hearing about what is happening in Ukraine, we came up with the idea to put our talents to work to support the people of Ukraine. What started as a little concert has now grown to feature 20 musicians,” said Elliot-Perreault.

An influx of the donations likely came from the link on the Saturday Service Twitch channel after the video recording of the show gained over a thousand views.

Elliot-Perreault always wanted to have a charity component to the Saturday Service livestream, so he reached out to the United Church of Canada to use its organization’s platform to raise funds; he was elated to see it wanted to collaborate.

Everyone involved in the Saturday Service was thrilled to associate their music with a good cause. In between every performance, performers would take a break to endorse the charity.

“Music has always been a great way to heal and bring people together and I feel like in a time where that is so desperately needed, I feel like it is very necessary to try and combine the two,” said Elliot-Perreault.

Aaron Crozier, the publicist of the Saturday Service, agrees.

“It was a really cool experience to not only get the experience but to have anything and everything that gets raised from it go to a good cause. It’s a good feeling,” said Crozier.

Trisha Elliot, the annual-giving lead for the philanthropy unit of the United Church of Canada, says the organization was pleased to see the group of musicians’ goals to do good.

“We work with partners all around the world and right now we have partners on the borders of Ukraine helping out with food and shelter and water and medical supplies, so that’s where those donations go,” said Elliot.

On behalf of the United Church of Canada, Elliot said the church was proud to be involved with the initiative.

“We were delighted to hear that the students wanted to help and raise money.”

And, as a mother, Elliot is very proud of her son for his hard work organizing the concert.

“I am so so proud of him,” she said. “It’s a huge effort to gather together 20 musicians, who all have their own schedules and coordinate them. And then to find the people that have the skills or talents to be able to do sound and live-streaming.”

She said she was impressed by everyone involved in the event.

“I’m just proud of all of them actually, not just my son but all of them, who really lent their skills to be able to pull this off.”

Elliot-Perreault credits his parents for their support and their help with using the church venue and organizing the charity to support Ukraine.

This was the first show that the Saturday Service pulled off. Other than a few technical slip-ups and a few issues with the mics and amps, the show went smoothly and according to plan, said Elliot-Perreault.

Although delivered for a virtual audience, the pew benches at Rothwell United church were filled with the large group of performers and their friends.

The reception of the show was positive and encouraged another event.

“I was engaged in the entire performance for the entire six hours, both the dress rehearsals and the actual concert, and I’m not connected to the program,” said Owen Tracey, one of the few non-musicians attending the show in-person.

Looking forward, Saturday Service has many potential plans to do more livestreams, release promotional videos, start a podcast with guest musicians, make merchandise and hopefully do live shows in front of an audience.