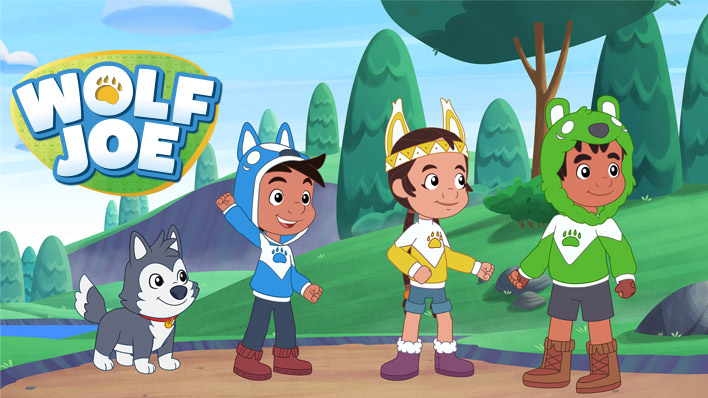 Joe, the main character of the Wolf Joe series, and his three friends embark on exciting adventures inspired by tales from his grandfather. Photo credit: Algonquin College script writing interns

Algonquin College scriptwriting students spent the latter half of 2020 working to make the January launch of the new animated TVOKids series, Wolf Joe, a howling success.

Wolf Joe premiered on Jan. 9, 2021 and follows the adventures of young Joe, an Anishinaabe boy and his two best friends, Nina and Buddy. The three embark on exciting quests to learn about nature and perform good deeds for their Turtle Bay community.

The trio’s ventures in this episodic series draw heavily from Anishinaabe teachings passed down to Joe from his grandfather and put emphasis on the characters’ spirit animals: the wolf, lynx and bear, connecting them to their cultural roots.

Gerald Tripp, chair of the advisory committee for the scriptwriting program at Algonquin College and line producer on Wolf Joe, worked with five scriptwriting students over the course of two semesters in post-production on the series.

“The field-placed students from the scriptwriting program were very helpful in this series,” said Tripp. “I was lucky to have them because each one of them brought their own diverse set of skills, such as graphic art, fundamental writing and researching.”

This series was not Tripp’s first collaborative endeavour with Algonquin College scriptwriting students — for the past 10 years, he has been taking students from the program under his wing.

According to Tripp, the scriptwriting program is high-caliber. He advocates for the field placement option, which gives students an overview of the vast possibilities and opportunities that exist in the industry.

“I remember what it was like to be a student without an overview of the industry, which is why I love giving field placement students experience in areas of the everyday professional production world,” said Tripp.

Tripp believes that this animated series is something for the Algonquin College community to be proud of.

“You will find fine Algonquin College graduates in all of the best production companies across Canada,” said Tripp.

“Elder Dave Courchene was in a great partnership with the Wolf Joe production team, and his moving comments about the show’s embodiment of the Turtle Island identity reinforce its theme.”

Another Algonquin College community member that played an integral role in the production of Wolf Joe is Kerry Patten.

Patten mentioned that her experience with the college was so fantastic during the completion of her pre-animation diploma in 2017 that she went on to complete a second diploma in illustration and concept art in 2018.

Patten worked on the animation front for Wolf Joe as a production assistant at Big Jump Entertainment — she is originally from the U.K. and has worked on various live-action features such as Game of Thrones, World War Z, and the Fast and the Furious franchise.

When moving to Canada, Patten switched gears from live-action to the animation industry — she has worked on the animation of every episode in the 46-episode series Wolf Joe.

“I had very little experience in the animation pipeline, so my learning curve was huge,” said Patten. “It is a perfect job if you want to learn all about animation, as you really can see how much work is involved in each episode.”

Like Tripp, Patten believes that this show centred on Anishinaabe culture is a great learning avenue for non-Indigenous children.

“Each episode has a great message and is linked to the Seven Sacred Teachings through their spirit animals of the wolf, lynx and bear,” said Patten.

Wolf Joe provided Patten with valuable insight into the world of animation. She is currently in the process of creating her own stop-motion series to eventually be pitched to Wes Anderson’s production company in the U.K.

“Making kids animation is hard work, but it’s also a ton of fun and it is so satisfying to see your name come up in the TV credits,” said Patten.