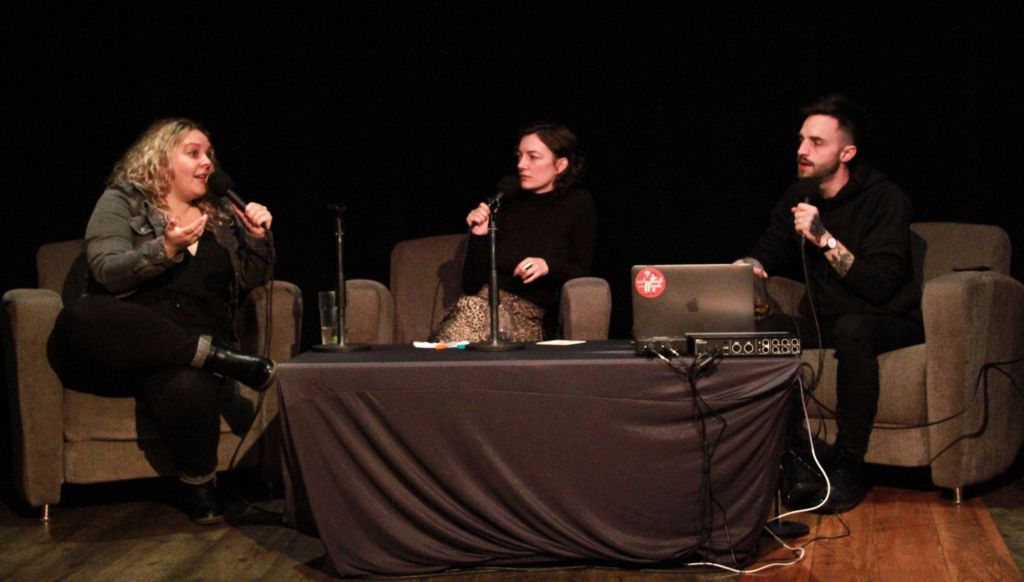 Sarah Crawford is no stranger to conversations about sex.

As the coordinator of the sexual violence prevention and harm reduction program for Project Lighthouse, the topic is part of her day to day work life.

So when Crawford met Turn Me On podcast hosts Jeremie Saunders and Bryde Maclean backstage at last year’s live taping at Algonquin, they had an instant connection – sex.

On Oct. 7, Turn Me On hosted their second live taping in the Algonquin College Observatory. This time they brought the home advantage with them: Sarah Crawford.

“In real life, people need to have conversations about what they want,” Crawford said in reference to one of Project Lighthouse’s favourite activities, the Consent Sandwich.

Crawford noted that when ordering a sandwich from the shop, you typically tell the sandwich artist exactly what you want. Why shouldn’t you be able to do that when it comes to sex with a partner?

Crawford’s position was created at Algonquin three years ago specifically to help students navigate conversations about sex and encourage them to have healthy sexual relationships.

Saunders and Maclean created Turn Me On with the same idea in mind.

“Sex is one of the very few things that we all have in common,” said Saunders, backstage before the show. “If it wasn’t for sex, we wouldn’t be here,”

And because sex ties everyone together at the root of our existence, it’s also something of interest to many at some point in their lives – even if many people aren’t quite sure how to start the dialogue.

But given the societal taboo surrounding sex, the fear of starting a conversation is still very real.

For some, Turn Me On has been a great deal of help in breaking down the barriers of that taboo and proving that sex can be openly discussed. For others, the help has stemmed from Crawford and Project Lighthouse’s safe space including its many on-campus events.

“We had a really good chat with Sarah the last time we were here and when this opportunity came back up we were like, ‘Let’s do that. Let’s chat,’” Maclean said, backstage before the taping.

Should students feel the need to chat, they are encouraged to seek counselling and at keeping an eye out for Project Lighthouse events on campus.

Listen to Crawford on Turn Me On when her episode is released later this month. New episodes are released every Wednesday.