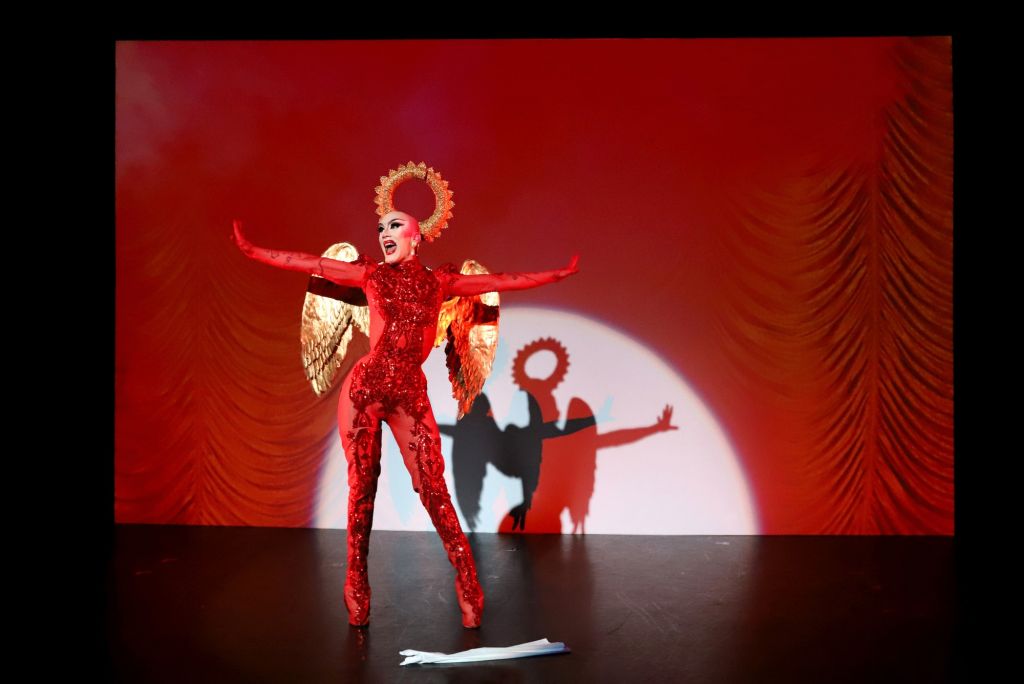 The colours, the magic, the drama: that was only the beginning of what her show could exemplify for her fans.

Sasha Velour who was the season 9 winner of RuPaul’s Drag Race, stopped by at the Algonquin Commons Theatre on Nov. 20, for her Smoke and Mirrors tour. She is one of the first drag queens to perform a sole one-woman show filled with incredible sounds and illusions.

She was draped in an angelic white dress with puffy sleeves, which served as a cover-up for her next costume change. She stood at the back of the stage under the darkness while a projection of her face was lit unto her.

Former photography student of Algonquin College, Selena Varcalli, says that she’s a huge fan of Velour. “Season 9 was when I first saw her,” said Varcalli. “I’ve never seen her live before.” Varcalli had the opportunity to meet Valour backstage as well.

Another Velour fan also expressed her excitement towards the show. “I just want to look at her,” said Adriana Burke, who used to be a student at Carleton University. “I just think she’s very creative, very intelligent. I just think we’re going to be really surprised.”

Her show incorporated colour, theatrics as well as the thread of storytelling.

Although Velour was also one of the many drag queens who didn’t allow fans to capture videos or photos of her act on their phones, she did, however, advise the audience that this was a show for their “eyeballs, not their cellphones.”

Velour was dressed in a sparkling red bodysuit with an incredibly detailed front was extended all the way down to her red high heels. “I’m just determined to do it in the most impractical and over the top way,” said Velour to the audience.

She was inspired by the movie called To Wong Foo, Thanks for Everything, and that’s when she was drawn to the drag scene. “I stepped into my high school costume shop and I borrowed a sequin mermaid dress and a layered brunette wig,” she said. “I brought them home and I did not return them.”

As she was telling her story, a projected image of her was layered unto the theatre’s backdrop making it appear as though a replica of her was displaying a photo right behind her. She revealed during the show that it took her about a decade to reveal to anyone that she was a drag queen. “I have not always had the confidence to turn into a snatched glistening demon in front of hundreds of people.”

One of her iconic tracks was when she lipsynched Sia’s “Cellophane.” As she moved her hands in different directions, colours of red and yellow would appear “smeared” onto the backdrop.

This song was one of 13 tracks that Velour lip-synced to, along with other songs from artists such as Whitney Houston and Annie Lennox. Velour also paid tribute to her season 9 lipsync challenge on RuPaul’s Drag Race. when she slowly released rose petals from her sleeves and then made the final reveal up from under her voluptuous wig.

Even though Velour had been studying to become a comic book artist and illustrator, she knew she was destined to live an “impractical but gorgeous life.” Her gigs were small but the small-town hustles didn’t stop from staging her own productions to staging her town’s first drag show.

She encourages those that have the vision to follow it no matter where it may lead you. “If you are driven by a vision for how things must be and you are willing to sweat and work hard, you might be experienced in [a] beautiful, theatrical perfection.”