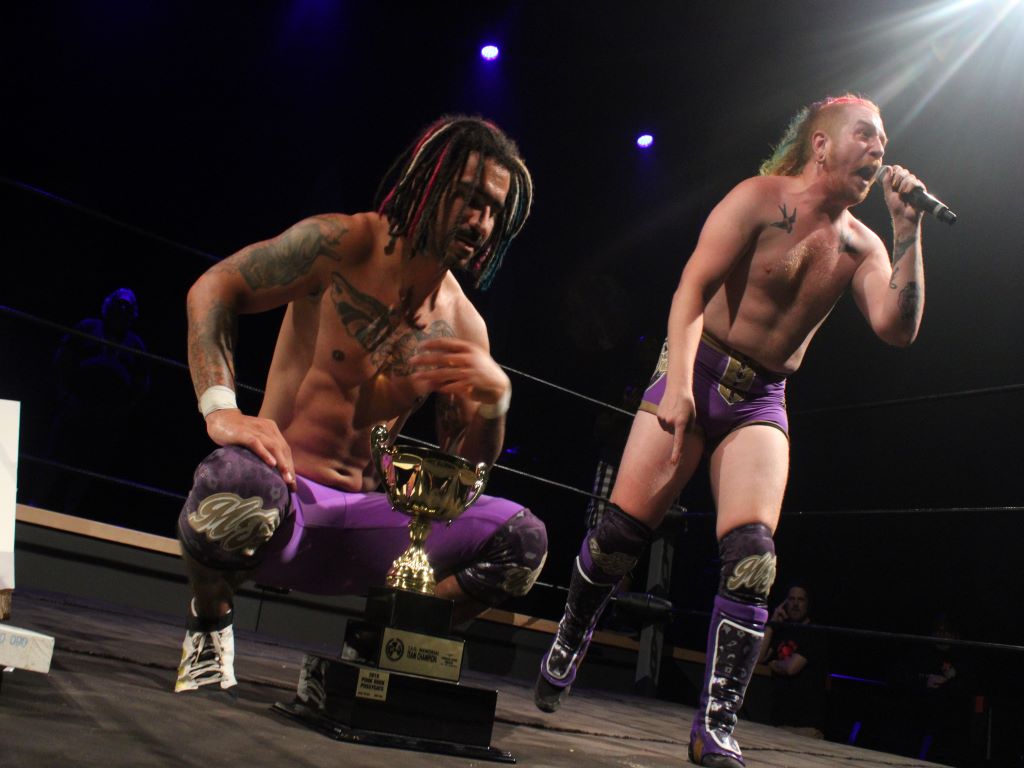 It was the first time the college has held a C*4 Wrestling event since Dec. 10, 2021. Their last event was C*4 Wrestling: Better Watch Out. Double Impact featured the second-ever T.A.G. Memorial Tournament. The founder of C*4, Mark Pollesel, explained the tournament’s origins.

“Terry Anne Gibson was the wife of my business partner, Stephen. She passed away in 2016. Stephen wanted a way to memorialize Terry, as she had been a big supporter of him and I working together,” said Pollesel.

“We decided to do a show in her memory of sorts. Given her initials, T. A.G, it was a natural fit that we did a tag team tournament show,” he added.

The first tournament happened in October 2019, hoping to become an annual event. Due to the pandemic, there was no tournament in the last two years.

Eight tag teams competed in the first tournament. This year, the tournament was contested by 12 tag teams, who competed in seven elimination bracket matches.

In the end, it was the tag team of DangerKid and Aiden Aggro (MSP) who were victorious when they defeated the team of Junior Benito and Hotstepper (Fresh Air) in the tournament finals.

One of the finalists, Junior Benito, described the crowd as “not a wrestling crowd.”

“It didn’t feel like a wrestling crowd, which I like because you can introduce them to what we do. It’s also a good opportunity to get new eyes on the product,” Benito said.

Pollesel is a graduate of Algonquin College’s scriptwriting program. He explained how his time in the program gave him the tools he needed to create C*4 Wrestling.

“What I took away from the program was the importance of structure for storytelling. Rewarding an audience with a well-told story,” he said.

“There are obviously great differences between scripting a feature film and how a wrestling show is put together. But at the end of the day, it all comes down to rewarding an audience that invests in what you’re doing.”

Last month, C*4 held its 11th Fighting Back: Wrestling With Cancer event to help raise money for the Canadian Cancer Society. The event raised over $42,000 and had 550 fans in attendance.