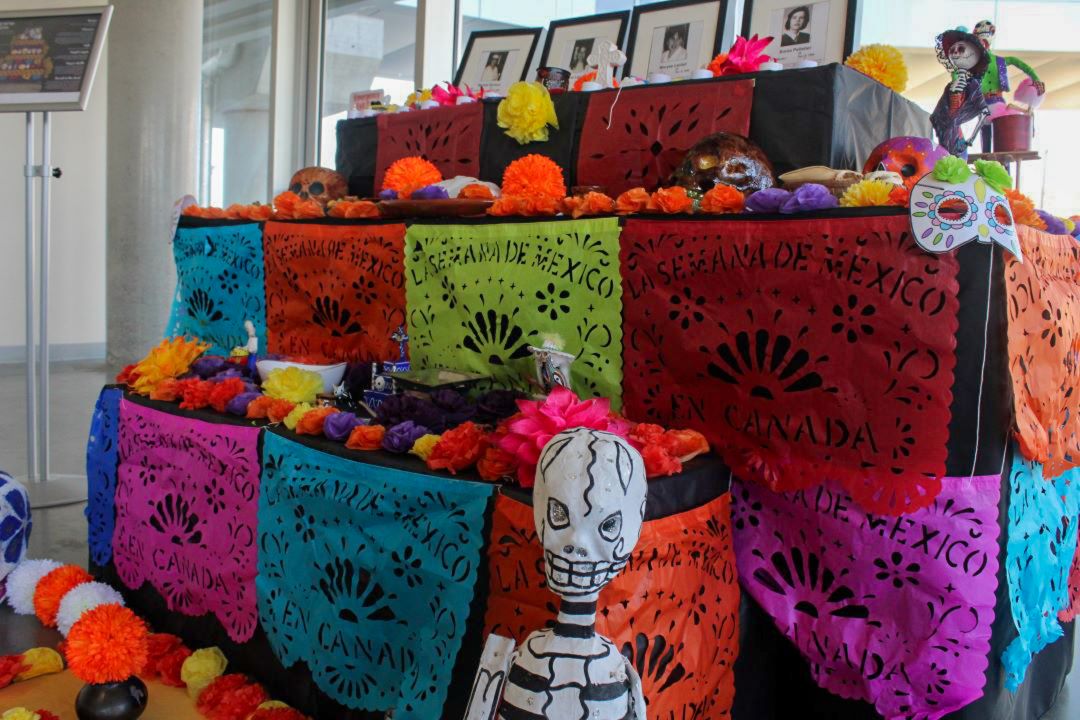 Ingrid Berlanga Vasile, the First Secretary of the Embassy Of Mexico In Canada, described Algonquin College students as very receptive during the Day of the Dead festival. Photo credit: David Rotel

As Algonquin College is working to become more inclusive and celebrate different cultures, the college collaborated with the Embassy Of Mexico in Canada to organize the first-ever Day of the Dead celebration at the college.

The event took place on Nov. 2 in the Student Commons. The festival featured a Mexican music performance by the mariachi band Los Paisanos, the “Death in the Skin” photo exhibit by artist Mauricio Silerio and an altar to pay respects to loved ones who passed away.

It also featured Day of the Dead cookies catered by Chiqui Bakery and spicy hot chocolate for everyone to enjoy.

The event started with the Ambassador of the Embassy of Mexico in Canada Arturo Hernandez, Students’ Association president Bolu Olutundar, the artist who curated the Altar Dulce Tapp and director of Algonquin College International Education Centre Ernest Mulvey thanking everyone for attending the event.

After the opening speech, the festivities shifted to the Corner Lounge, where Los Paisanos began playing popular Mexican music such as Despacito.

“I simply reached out to them, I sent them an email and they were totally on board. We connected and came up with an idea and a plan,” said Francis.

“I was very excited to work with Algonquin College to promote the culture of Mexico and this big tradition that we have. I immediately said yes,” said Ingrid Berlanga Vasile, the First Secretary of the Embassy of Mexico in Canada.

Vasile was happy with how students reacted to the event, describing them as being very receptive.

Satisfied with how the festival went, Francis revealed there will be another Day of the Dead festival at Algonquin College next year.

“I want us to start celebrating more cultures and really make sure everyone feels seen and heard on campus,” She added.