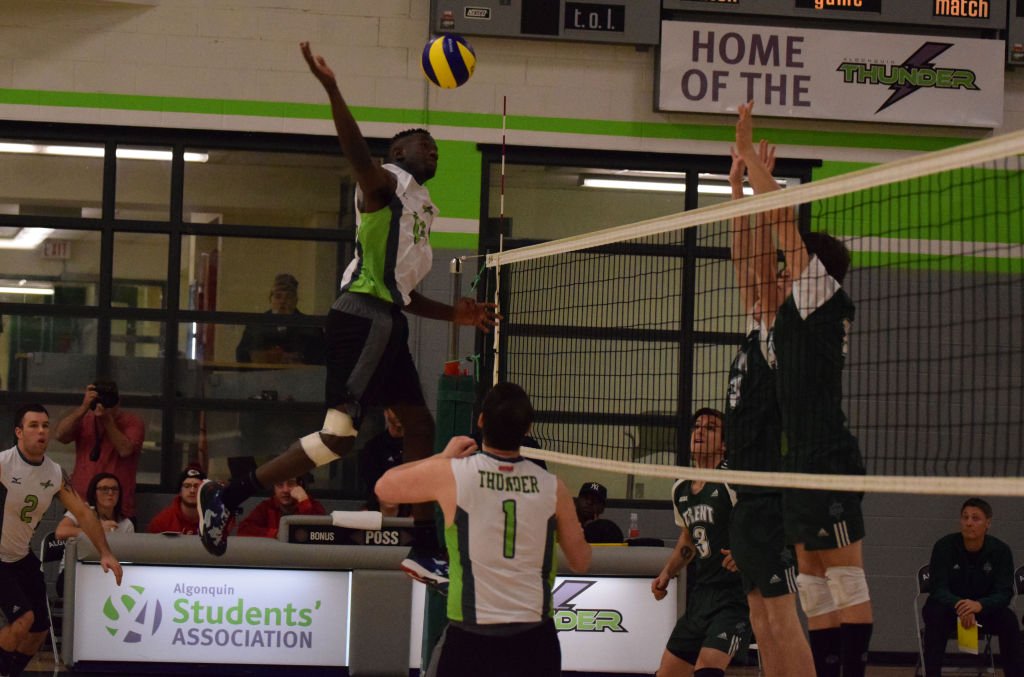 The men’s volleyball team has had a tough start to the New Year, only managing to win one set in their first four games of 2016.

Their most recent games were on the road against Seneca College, on Jan. 22, and against Centennial College the day after.

The Thunder ended up losing 3-1 against the Seneca Sting and 3-0 against the Centennial Colts.

The Algonquin Thunder played their second game of 2016 against Fleming College on Jan. 16. Even though the Thunder was gaining confidence towards the end, the game ended 3-0 in Fleming’s favor.

The Thunder also played their first game of 2016 at home Jan. 15 against the Trent University Excalibur.

The game started at 8 p.m., and it took no more than one set to get the fans on the edge of their seats.

There was no shortage of action in the first set as 48 points were shared between the two teams. Trent took the first set by a score of 25-23.

The second set was not the same story. The Excalibur were up by 11 points in the opening five minutes of the set.

As the Thunder were making a comeback, one of the referees called a foul against Justin Kingsbury and Stephen Patterson for missing a rotation. Trent went on to win that set by a score of 25-19.

At the end of the third set, Algonquin was winning by a score of 25-24 when Trent University called for their last timeout of the set. All the Thunder had to do was score a point to end the set and to get back in the game.

Although the Thunder had worsened their record with one more loss, the players and coaching staff remained positive after the game.

“I think the score reflects the efforts the team put in the game today. The first and third sets were extremely tight and they could’ve gone both ways,’’ said head coach Mohamed Shaheen.

Players seemed confident when they were asked what they were going to work on to improve their performance in their next game.

Mark Von Treichman, Algonquin’s middle, said that he had no doubt that they would play great volleyball during their next games. “I think that we have to focus on not making the same mistakes. I know I made some mistakes this game but I’m confident I will not make them again.’’

The players were confident about their abilities when playing away. “I don’t know what it is about playing away from home, but I always feel we play better at other schools,’’ said Von Treichman speaking about their upcoming games against Seneca and Centennial.

“We need to work on consistency and confidence, those two elements are the key’’ said Shaheen to his players after the game.

Even though they will not make the playoffs for a second year in a row, the Thunder players and staff remain positive and will keep working hard until the end of the season.