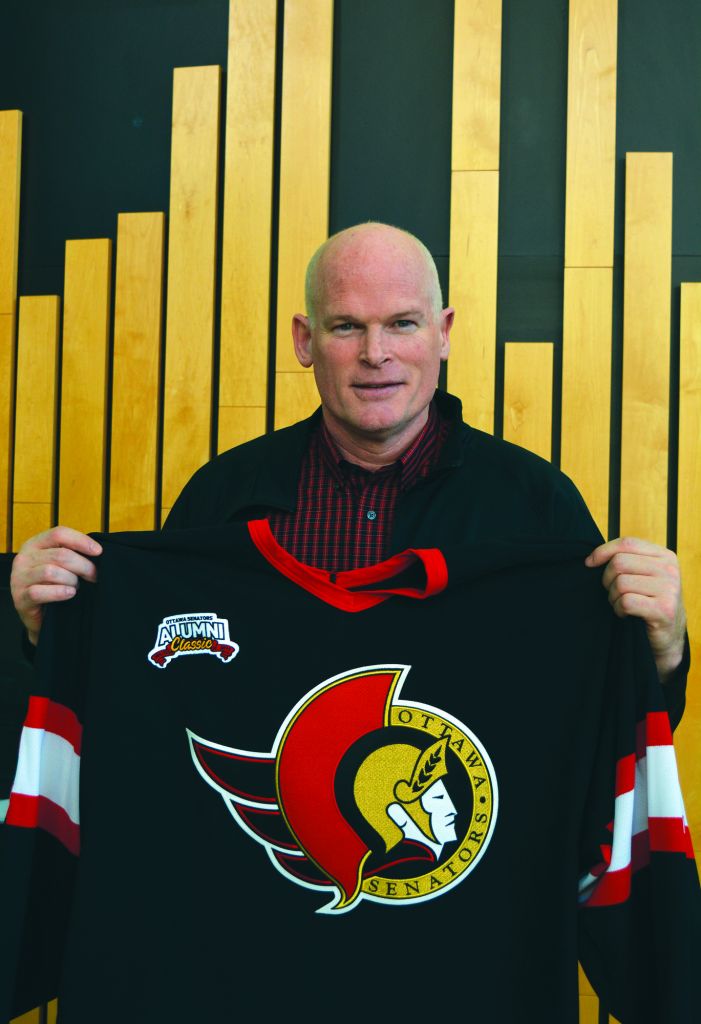 Jim Kyte stood on the blue line of the Canada 150 rink at Parliament Hill, singing along to the national anthem and gazing at the Canadian flag atop the Peace Tower, surrounded by falling snow.

“I’ve stood on the blue line over a thousand times in my hockey career. But that one was truly special,” the former NHL player said. “I’ve never felt more Canadian.”

Kyte, the dean of Algonquin’s School of Hospitality and Tourism, played with the Ottawa Senators in the NHL Alumni Classic game at the Hill on the evening of Dec. 15. For him, the first legally deaf player in NHL history, it was a time of reminiscing about his 598-game NHL career.

“The game itself was fun…It was nice to bring back the players and have them come back,” he said. “We had a lot of banter in the dressing room. I had played with four or five of the guys during my career, but many of the other players I’d played against.”

Some of the players came from across the globe to compete, while others, like Kyte, didn’t have to take a long hike in order to participate. Kyte is an executive for the Ottawa Senators Alumni, which is made up of players who have played for the Sens, but also for Ottawa locals who have played in the NHL on other teams.

It was also a treat for Kyte’s colleagues at Algonquin.

“It was so special to see (the game),” said Shelley Styles, director of Student Support Services. “The guys and the fans were having a lot of fun. It was a really nice night.”

Styles affirmed that the atmosphere was intimate for a hockey game, likening it to an outdoor rink where her kids played when growing up. She was glad to go downtown and support her colleague.

“It was great to see Jim on the ice. He looked awesome and looked like he was having a great time,” said Styles.

Although Kyte only played four games with the Sens in the 1992-1993 season, Kyte also played for the Winnipeg Jets, Pittsburgh Penguins, Calgary Flames and San Jose Sharks.

“Overall (during) my career, I’ve always said I was with the Senators for a cup of coffee.”

Last year, Kyte played for the Jets in an outdoor alumni game in Winnipeg against the Edmonton Oilers.

“That was a lot of fun but it was a big production with all the pomp and the pageantry and it was on TV,” he said. “This game on the Hill was more of an intimate experience. It was smaller. The fans were right there. They were very different experiences.”

“It wasn’t really about the scoreboard (this time).”

In preparation for the Ottawa game, Kyte skated a few times and readied himself to play with recent players – Chris Neil, Mike Fisher and others.

“I just made sure I didn’t embarrass myself.”

Kyte has nothing but positive memories as he looks back on the Parliament Hill game.

“Anytime you get asked to participate in anything like this, you try to seize the opportunity. The opportunities don’t come as often anymore. The last time I played professionally was 20 years ago. But it’s a gift that keeps on giving.”

“I’m thankful to have been asked to play,” said Kyte. “I’d do it over again in a heartbeat.”