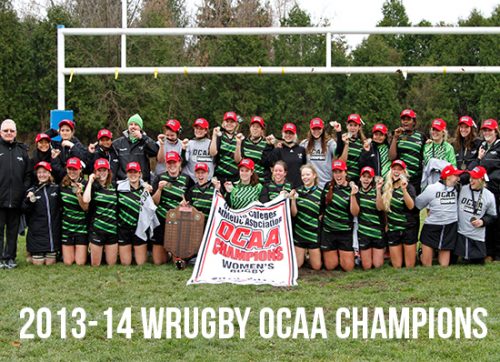 A year after a controversial decision cost the Algonquin women’s rugby squad a gold medal, the Thunder got their revenge on Nov. 17, defeating the same Humber Hawks team that they shared the 2012 championship with on Humber’s home field.

In December 2012, it was determined that a 16-13 Algonquin win in the final game was played under an unfair overtime format, and the game was counted as a tie.

This year, in a final game that featured five lead changes, Algonquin scored 20 unanswered points in the second half to take a 35-21 decision.

“It feels how it should have felt last year,” said head coach Dan Gauthier.  “It was fitting that it was here at Humber.  We had that extra incentive to make sure we brought the championship back.”

The two squads, both 7-0 heading into the final match, were on a collision course for a repeat all season.

While the Thunder amassed 310 points in their seven games, not allowing any points against until the final quarter of the regular season finale, Humber duplicated their dominance in the West Region.

“It’s been the same for a couple years in that the Humber game is the most challenging game,” said Gauthier.  “You have to work extra hard for it, and I know that’s what won us this game.”

For the third time in as many years, both squads came away with medals.

Wing Chanelle Fortin won player of the game for Algonquin, adding two tries on the day, including the final try late to put the game out of reach.

Centre Sophie Bulger opened the scoring with a try just minutes into the game.  Humber scored twice to take a 14-5 lead before Fortin got her team back in it.

The Thunder, who allowed only 15 points all season, trailed 21-15 at half before storming back.

“What changed in the second half is our players got a lot lower to make tackles,” said Gauthier.  “Humber’s a very big team, they struggle to get low.  When we started getting low in the second half, there was no stopping our girls.”

Gauthier hopes to keep this team intact next year.

“Having two gold medals in your pocket is a great recruiting tool, and I think we’re keeping a strong core.”