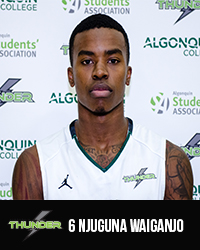 The Thunder men’s basketball team head into the winter break undefeated after handing the Canadore Panthers a 103-70 loss on Nov. 30.

With strong play from guard Njuguna Waiganjo, the Thunder managed to play through some less-than-stellar defense in the second quarter. They let the Panthers cut into the lead by allowing a 13-2 run and were outscored 29-9 in the quarter but that did not deter them from turning things around in the second half.

Waiganjo finished the game with a team-leading 24 points and two assists but thought the team performance was a bit too relaxed.

“I thought we got a bit too lackadaisical because Canadore is a weaker team in our division,” said Waiganjo. “We saw that and took them a bit too lightly, but we turned it up in the second half listening to coach and really tuned in to what he was talking about.”

The coaching staff was not very pleased with the team’s defensive game in the first half and sought to improve that for the rest of the game.

“We had some big time letdowns there in the second quarter,” said head coach Trevor Costello. “I told the players at halftime that I’m taking the blame for this because I relaxed, I started putting in a lot of bodies in and players that normally don’t play the first half and it backfired, so I’m taking responsibility.”

The Thunder came out swinging after halftime. Seemingly energized by Costello’s speech during the break, the team had a strong offensive showing in the fourth quarter, outscoring the Panthers 28-8.

Unselfish play from Thunder guard Tyrelle Samuels helped the team stay on track offensively, with seven assists and 12 points; he was one of the standout players according the coaching staff.

“Tyrelle had some beautiful passes,” said Costello. “He made some really nice passes out there and that was one of the things that really stood out for me.”

With help from Samuels and Waiganjo, the Thunder managed to keep up the offensive pressure throughout the game, though it was with less intensity than the coaching staff was hoping for.

“In our league if you’re not ready to play, you can lose to any team,” said assistant coach Jim Langis. “Our goal is to win the championship and to win a championship you got to maintain that intensity. You got to be mentally playing against the best team in the country every time you are playing; any letdown is going to come back and bite you.”

The Thunder came into the Canadore game after defeating Seneca College the night before 94-76. With two wins to end their last home stand, Algonquin have a perfect 10-0 record heading into the second half of the season, where they hope to keep the momentum going.