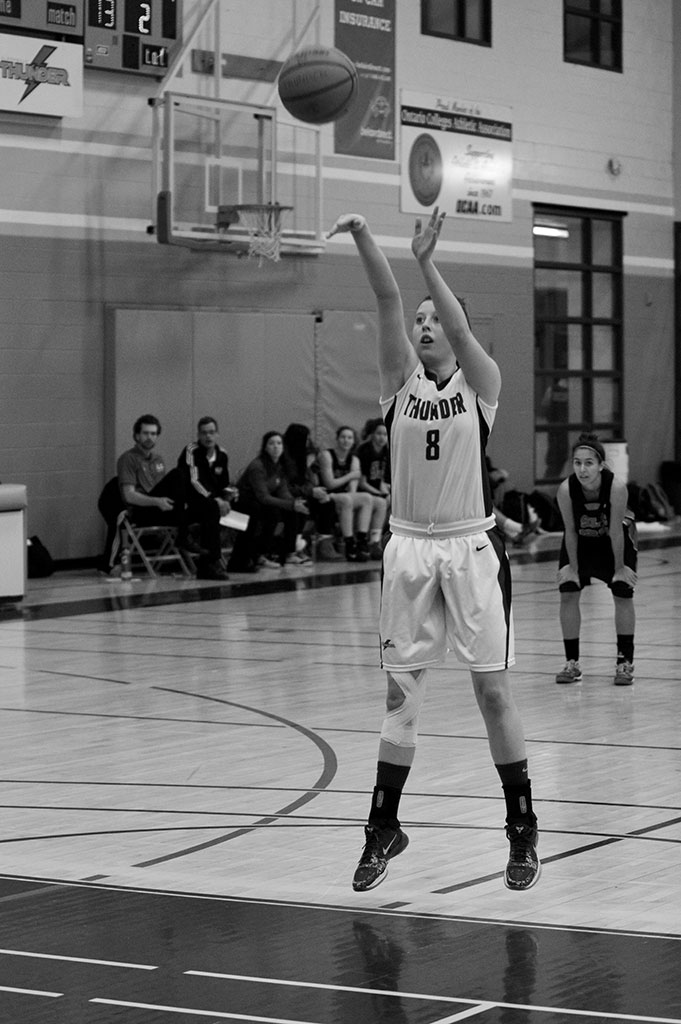 The Thunder women’s basketball team remain undefeated following a narrow 50-48 win over the St. Lawrence Vikings, despite trailing by a few points throughout the first three quarters.

“It was a fun game to be a part of as it was close right from the very start to the very end,” said John MacInnis, head coach of the Thunder. “We don’t generally get behind. I thought we did a good job of gutting it out.”

The Thunder managed to keep St. Lawrence within a couple baskets for the entire game only pulling into the lead by the fourth quarter. This made it an exciting game, which could be heard as cheers echoed through the gym with each basket in the fourth.

St. Lawrence put up a good fight and gave the Thunder one of their more challenging games this season. The Thunder normally have a good lead in the first half said Sandre Bascoe, so this game kept them on their toes and the pressure pushed them harder to pull forward in the second half.

Bascoe was the lead scorer of the game with 15 points, followed by Claire Abbott with 14. It was a low scoring game, 27 points below the average points per game.

Bascoe was double-teamed many times throughout the game. “I think I need to see the double earlier when it’s coming ‘cause I knew they were doubling me but I still put the ball down on the floor,” said Bascoe, despite doing well at finding open teammates and passing.

This was Claire Abbott’s fifth game after recovering from a torn ACL and bone bruising. She was happy to have a positive game.

“When I did make mistakes I think I was overthinking things.” said Abbott.

With 14 points, this game is one of her best scoring games since returning to the court.

“We gave up way too many offensive rebounds,” said Abbott.  “If we had boxed out, they wouldn’t have gotten second chances.”

The Thunder had 22 offensive rebounds, which is just under their average per game.

The team is first in their division. With only two regular season games left, nationals is within their reach.