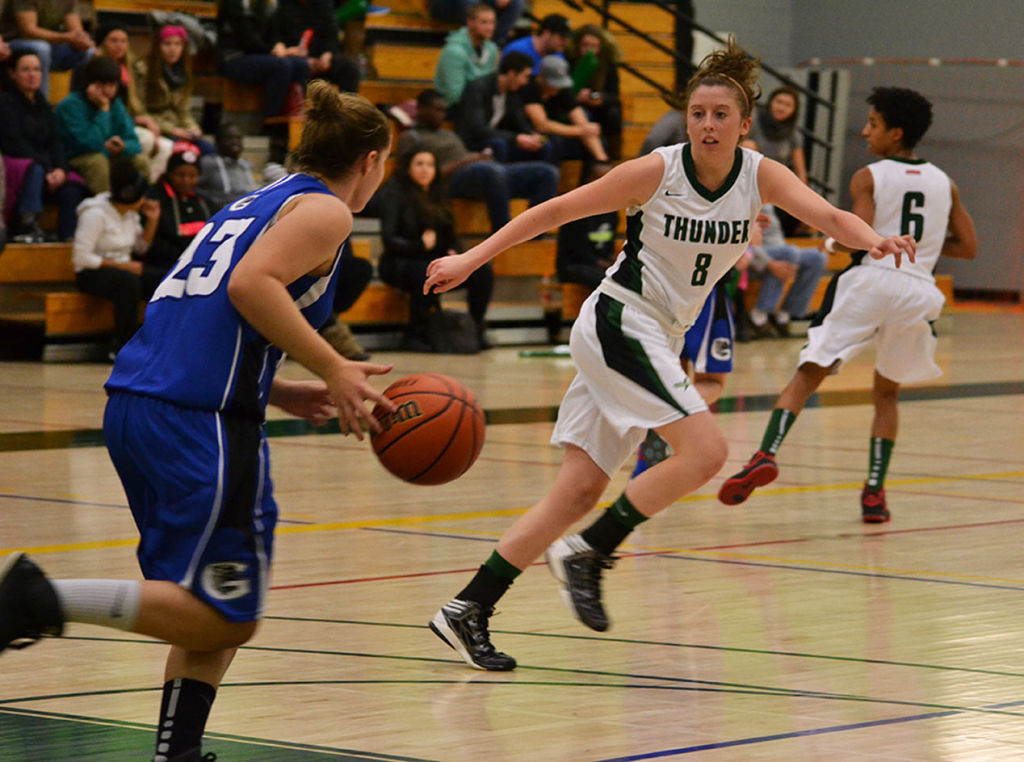 Guard Claire Abbott defends against a dribbling Georgian player. She had four assists in the win.

The team hosted the fourth game of their regular season against the Georgian Grizzlies on Nov. 9.

The Thunder had the game mostly wrapped up by half-time with a 17-point lead and persisted aggressively on into the fourth quarter, dominating the game with a final score of 79-33.

Despite the Grizzlies’ efforts in the first quarter, they were quickly worn out by the Thunder’s dominant guard.

Guard Kim Cupid, a second-year cabinet making student, played a strong game the whole way through. Cupid was the top scorer of the evening and earned 22 points for the Thunder.

It’s thanks to the efforts of strongly skilled players like Cupid that the women’s basketball team has not lost a regular season game since 2011.

Guard Amber Burton, a second-year social service worker, expressed that some games are less daunting than others because not all teams are not on the same skill level.

“As a team, we took advantage,” said Burton.

“We practiced hard; we executed what the coach wanted.”

“The coach wanted us to step it up at half and make sure we got less turn overs. I think we did what he expected and I think we played good defence.”

“It was a good team effort; everyone contributed this evening,” said head coach John MacInnis.

Sitting in first place in the East Division, MacInnis said the team was looking forward to their next two games against Loyalist and one of their greater challengers, St. Lawrence.

“Hopefully, next time around — another win,” said MacInnis.

On Nov. 15, Algonquin made easy work of Loyalist, one of four OCAA teams without a win thus far, winning by a score of 107-32.

The Thunder continued their dominance over Loyalist, whose basketball team has only mustered a total of 117 points over three years of annual matchups with Algonquin.

A day later, it was a much bigger challenge for Algonquin, facing an undefeated St. Lawrence team on the road.

The Thunder managed a 64-54 win in enemy territory to end St. Lawrence’s undefeated streak and maintain sole possession of first place in the division.