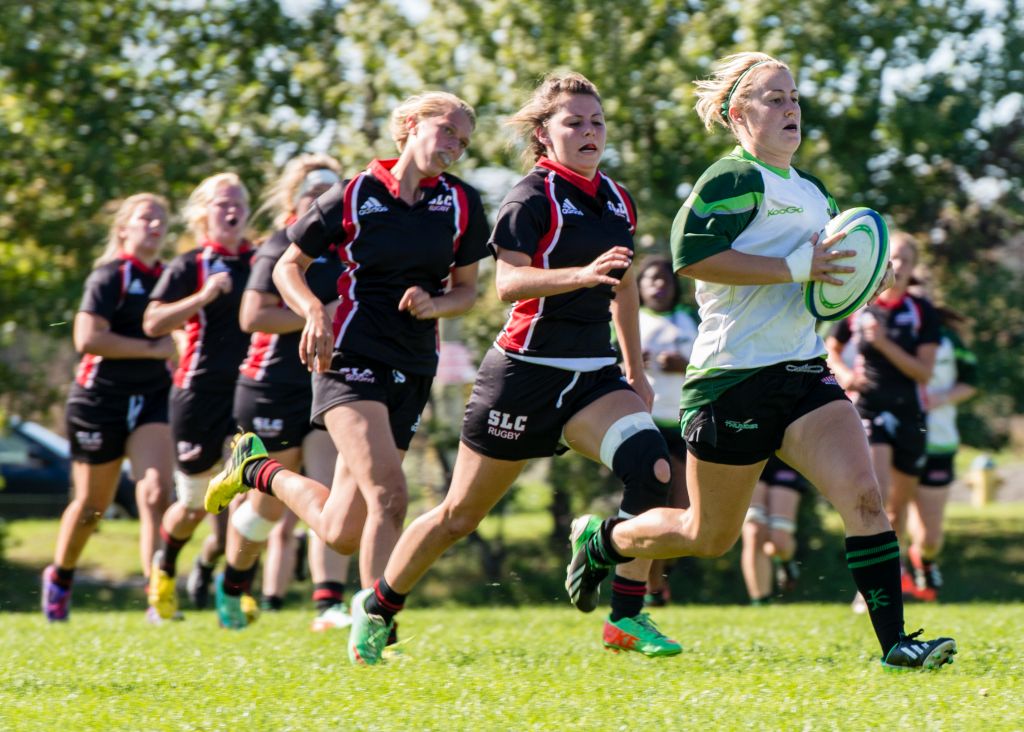 Using a mixture of speed, smart kicking and crisp ball-handling, the Thunder (3-0) scored five tries and two bonus kicks against the winless Vikings (0-3) in the Sept. 28 afternoon match-up.

A fast-paced approach allowed two tries in from the Vikings’ Jessie Heyman but the Thunder were sound at the set-piece — their forwards opposing the drive and vaunting the Viking’s scrums.

The Thunder’s scoring margin at the South Nepean Rugby Field was uncomfortable until the second-half of the match, with St. Lawrence drawing first blood and keeping the score tied until the 63rd with the tally 12-10 for Algonquin.

“By that point our injuries were starting to take a toll, plus we did not have six key players in the lineup, so we just didn’t have the subs off the bench to finish it off,” said Viking’s head coach, Kait Pasic.

St. Lawrence competed well against the East Division’s top team, coming close to matching the Thunder early on in the first half on clean breaks and meters made.

This didn’t sit well with Thunder fans in attendance.

“I think (the Thunder) have some work to do,” said Ron Port, the college’s former athletics administrator, who was watching the match. “I was nervous at the beginning.

“St. Lawrence, who is supposedly not a strong team, was taking it to us.”

Yet the Vikings, who were left still searching for their first win, crept closer, aided by a more attacking, free-running approach.

“Everybody was trying to run and there was a lot of talk and communication,” said Viking’s back coach, Ron Murphy.

While the Vikings frequently fed the ball down the line with long, aggressive passes their poor discipline in the tackle meant they conceded possession too easily to which the Thunder made them pay.

Guided by the return of key veteran Morgan Houde-Pearce and boosted by rookie Venesha Angus, the Thunder proved lethal on their counterattacks, with both first half tries highlighting the team’s growing up-tempo approach.

Houde-Pearce’s fitness impressed, scoring two tries and both kicks while appearing defensively sound and dangerous with the ball in hand.

As seven minutes into the second-half ticked over, a sweetly-timed pass sent the inside centre down the right wing, making for a frantic spectacle as she outran seven Vikings for the touch down.

Scoring two tries and kicks each, the OCAA All-Star was modest, stating her performance was only “average.”

“Last year we won,” the business administration student said. “So we have big shoes to fill.

“We definitely have a lot of work to do because the other teams are catching up to us.”

Houde-Pearce will be an injury concern, after leaving the field in the 75th minute with a pulled hamstring.

Overall, the Thunder looked best when their dominance gradually wore down the Vikings as the second spell wore on.

“The second-half was definitely our better half,” said lock Alexandria Ellis. “We believed we were one unit, and moved forward with the mauling, dug deep, and got more tries.”

Acting on a series of fatigue-induced turnovers and handling errors, the team managed to keep the pressure on until the end of the game.

Moving forward, head coach Dan Gauthier’s plan to make the Thunder a better all-around team is going to start with the mind.

“Almost always the case with women’s rugby is mental and emotional control,” he said. “So it is about trying to pick people up and install confidence.

“For our team, there is a need to believe in yourself more and trust that you can do these things.”