Thunder too little, too late 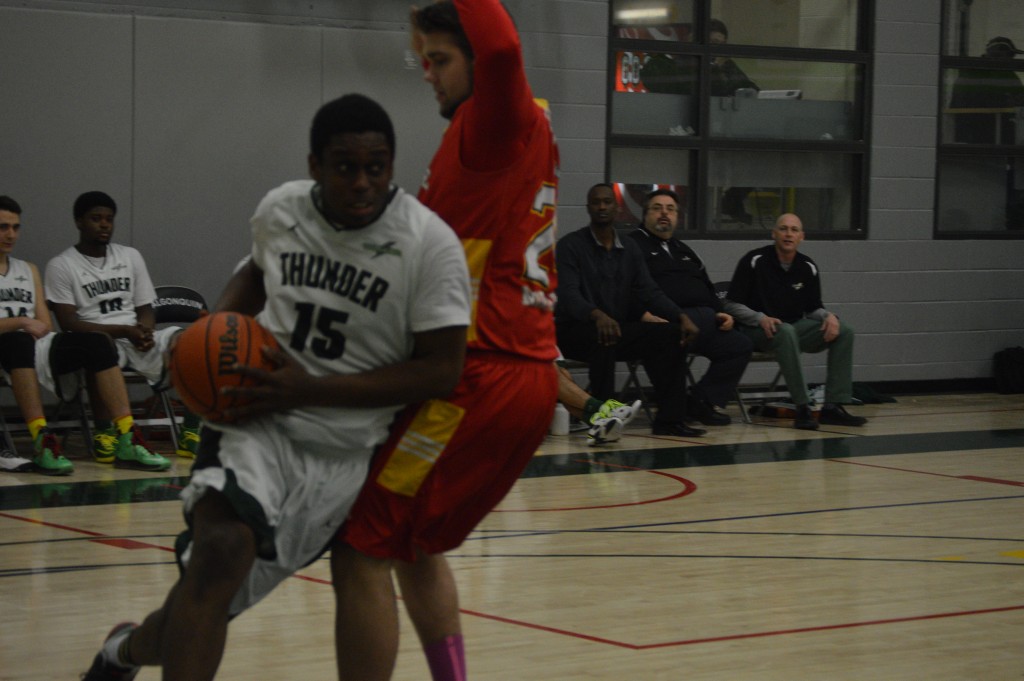 The Algonquin Thunder men’s basketball team pulled off a 75-65 home win in their last game of the season on Saturday, despite not making it to the playoffs.

Before the game, the Thunder held a graduation ceremony for long-time Thunder member Patrick Lumumba. Lumumba has been a part of the Thunder Basketball program for his full five years and has been a valuable contributor over that time.

After holding a double-digit lead from the early stages of the third quarter, the Thunder faced little-to-no threat for a comeback by the Canadore Panthers for the remainder of the game.

The Thunder end their season on a two-game winning streak, finishing with a record of 11-9. This ties them at 6th place with George Brown.

Traditionally the top six teams in the division move forward to the playoffs, but due to OCAA rules, George Brown qualifies over Algonquin since the Thunder lost their previous matches against each other.

Costello is referring to the news the team learned the morning of the game, which was that the Thunder couldn’t make the playoffs no matter what happened that night.

The Thunder held a modest 15-13 lead in the first quarter and ended the half with a 35- 26 advantage.

However, they blasted their lead to double digits right after the half with a 61-45 quarter and didn’t look back.

“We started off pretty bad because we found out this morning we couldn’t make playoffs, so I guess our team sort of rode on that,” said forward Murphy Beya. “But we picked it up in the second half and played hard defense.”

Beya led both teams with a game-high 23 points on 9/17 shooting with 7 total rebounds, two blocks, three steals and an assist on a team-high 29:37 minute game.

“I was just running in transition, trying to sneak in and rebound,” Beya said on how he got his shots in. Brandon Burke continued his hot streak as he was the only other double-digit scorer for the Thunder, adding another 16 points, eight rebounds and two steals in the win.

But the strong end to the year doesn’t say much for next season to coach Costello.“We’re going to have a bunch of new guys coming in next year,” Costello said. “Guys that were here tonight, it could be their last game.”

“It’s unfortunate,” Costello continued. “Not qualifying for the playoffs was a first for the coaching staff and we certainly don’t want to make it a habit.”