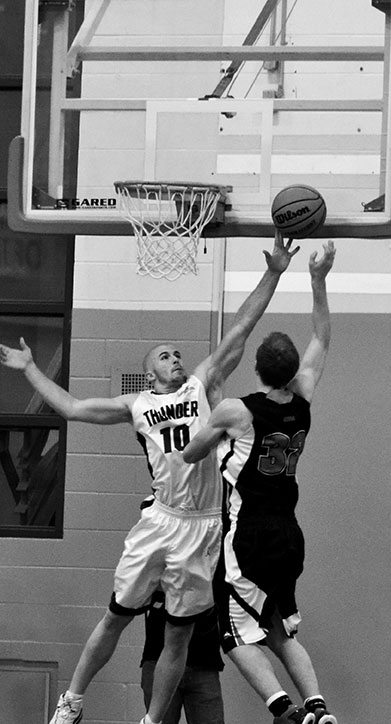 A sloppy start offensively was offset by a very strong defensive performance as the Algonquin men’s basketball team ran their record to 16-0 on Jan. 31, clinching a spot in the OCAA championships.

The Thunder silenced the St. Lawrence (K) Vikings 76-46, on the strength of a stingy defense that forced 17 turnovers and was aided by some bad shooting from the Vikings.

St Lawrence finished the night shooting 32 per cent from the field and a dismal 2 for 15 from beyond the arc.

The start was ugly for both sides, as mid-way through the first quarter the teams were knotted at just two points apiece. But Algonquin managed to pull away after a few trips to the foul line and finished the quarter up 10-4.

“We got off to a really shaky start,” said guard Njuguna Waiganjo. “I thought we had to rely on our defense to win this game, quarter by quarter. Our shots weren’t falling, but we stuck to the coaches game plan; keep the guys out of the paint and rebound hard and that’s what we did.”

Thanks to a stifling full-court pressure, the Thunder limited the Vikings to a season-low 15 first half points, on route to opening the game up in the second quarter, and entering the break with a 32-15 lead.

“Let’s be honest, they missed a few bunnies in that first half, so 15 is not indicative, it could have easily been a little bit more,” said head coach Trevor Costello. “But [what worked] was our tenaciousness on the ball. We worked all week on ball screens and we defended them well today.”

The wide margin of victory allowed the Thunder to get everyone more involved, as the bench provided 36 points on a night where 13 different players saw court time.

Tyrelle Samuels finished just shy of a triple-double, with 11 points, 10 assists and eight boards. Waiganjo had a game-high 15 points despite getting in foul trouble early and spending most of the first half on the sidelines.

“I think we came out too soft and we just picked it up a little more,” said guard Derrek Mooney. “It was just being aggressive, being all over the court and I thought we played better… It was a team effort win.”

The Thunder are still undefeated with only four games remaining on the year. The team could have number one seed in the OCAA East locked up as early as next weekend, but Costello says regardless of what happens, his team will not take their foot off the gas heading into the playoffs.

“Our guys don’t want to rest and I want to keep them fresh,” said Costello.  “I want to keep their numbers up so when it comes to individual accolades, I mean the team is the priority, but we want some individual [recognition]. Njuguna’s already up on the wall, and I’d love to get him another All-Canadian. Tyrelle’s a great defensive player so I’d love to see him get a defensive award. I may sub them a little quicker, but I’m not resting guys.”

Next weekend the Thunder take on Centennial on Feb 7, before meeting the number two team in the East, George Brown on Feb 8.