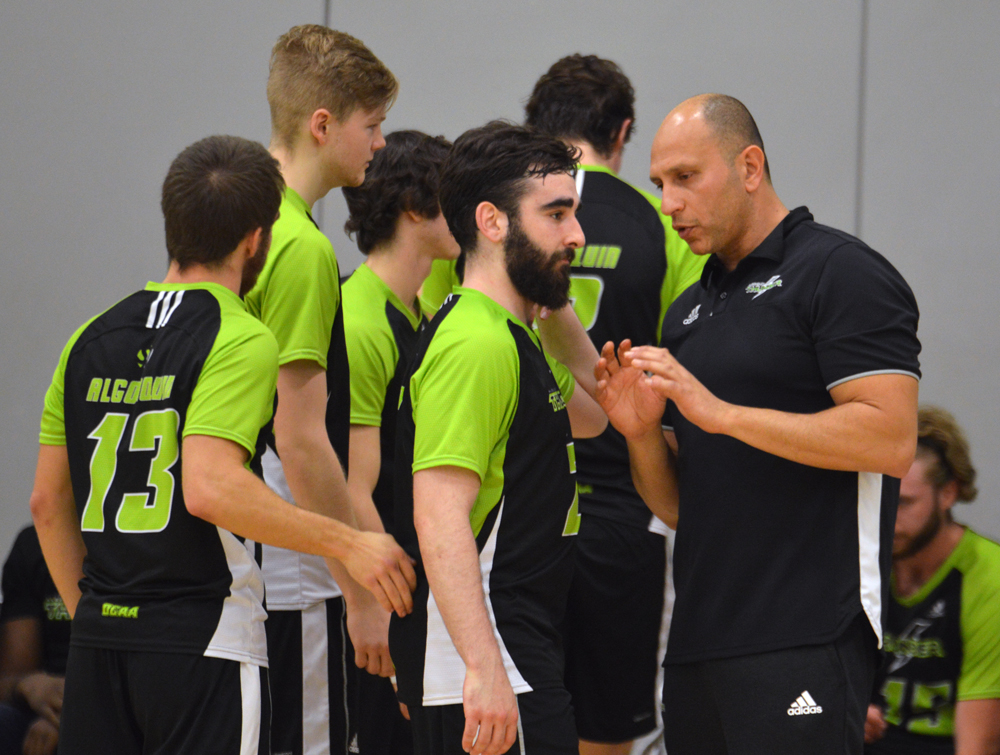 Thunder head coach Mohamed Shaheen gives pointers to libero Nicholas Vannieuwenhuizen during a time out at the Nov. 24 game. The Thunder won the night against Centennial with 3-0. Photo credit: Jonathan Mulvihill

The Algonquin Thunder men’s volleyball team were at the top of their game, serving a crushing defeat to the Centennial Colts Nov. 24.

Both teams had many streaks and setbacks, but the Thunder overcame the Colts in a shutout game of 3-0.

Jarrod McNaughton, who plays left side for the Thunder, was once again a big scorer during Saturday’s game, contributing 10 kills. He said teamwork was the main factor that won them the night.

“All players from both teams did really well out there, we were just more confident in our plays, our defense was solid, and our serving was better,” McNaughton said. “It also helped that in all three sets, we scored early on, so we set the tone of the night that way too.”

Another top player for the Thunder was Richard Bucar, who plays both left side and right side for the team and scored six kills.

“I think one of the things that contributed to our victory was strategy,” Bucar said. “We were going for more smart hits and less strong ones. We were less aggressive compared to some of our earlier games.”

Other players who contributed to the win included Thomas Cullingworth, who scored nine kills, and Ryan Quirion, who chipped in four kills.

According to Thunder head coach Mohamed Shaheen, the team has improved in many areas during the year.

“I saw that the team was more coordinated and took more risks,” Shaheen said. “The new players that joined this year have been able to meld together with the old ones.

“I find it really nice to see these players learn from each other, help each other and ultimately grow as a team,” he added.

Shaheen also commended the Colts on their performance during each match.

“Centennial has a lot of drive and determination, but fortunately for us, we were able to overcome and win the game,” he said. “They have had a rough season this year, but they did put up a good fight out there tonight.”

Algonquin’s final game of the semester will take place Dec. 1, where they will host the Seneca Sting.