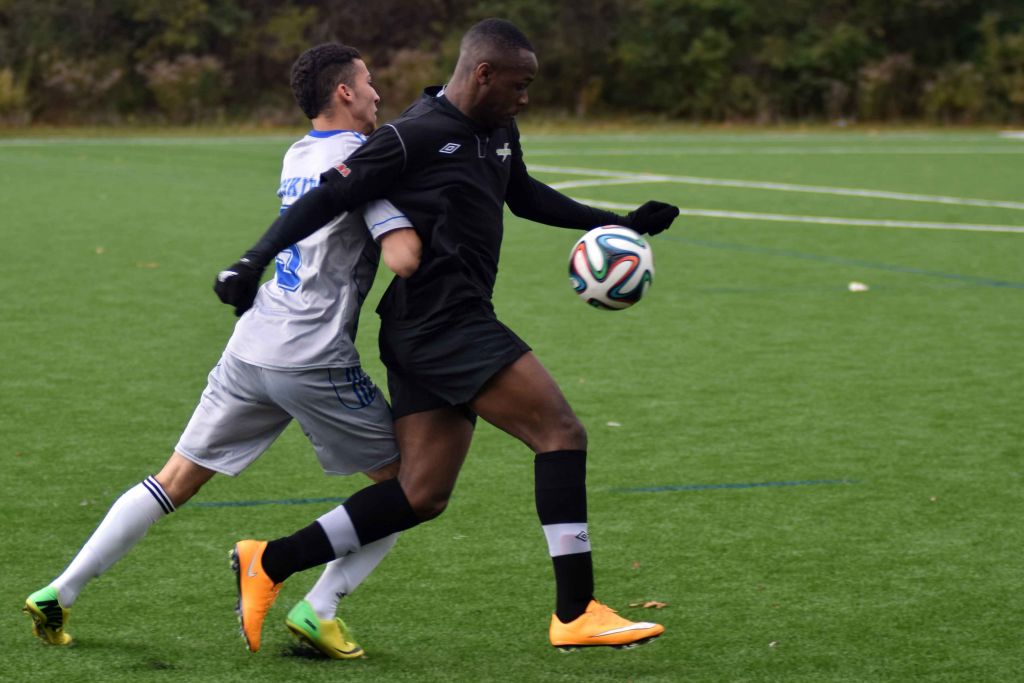 Trevor Turner battles for the ball during the second half of Algonquin's 7-0 drubbing of Keyano.

Algonquin jumped out to a lead two minutes into the game and never looked back, trouncing the Keyano Huskies 7-0 in the lid-lifter of the CCAA men’s soccer championship.

The number one-seeded Thunder were led by Kishoyian Kipusi who had four goals in the second half to put the game far out of reach.

“I’m just happy to be able to help my team score that many goals so we can close out games,” said Kipusi. “Just being in the right place at the right time. It comes from knowing where you are on the field.”

Playing their first game since Oct. 25, the Thunder showed no signs of rust coming out of the gate, sending Lucas Blain in alone to put the team up 1-0 almost immediately.

The team would add to its lead right before half, when Abe Kamara was dragged down in the box, giving him a penalty shot that he easily finished.

In the second half, Kipusi stole the show scoring four straight goals. Trevor Turner would also add one in the 90th minute for good measure.

“We identified early that they didn’t have a very strong back four so we were trying to exploit that,” said head coach Mike Gagliano. “The guys came in and did exactly what we asked of them, getting a guy in behind. We are a very pacey team and it’s very hard to keep up with us for most teams. So if we can get in behind like we did, it usually ends up in the back of the net.”

Algonquin will try and carry the momentum into tomorrow’s semi-finals where they will face the VIU Mariners. The game will kick-off at 3:00 p.m.