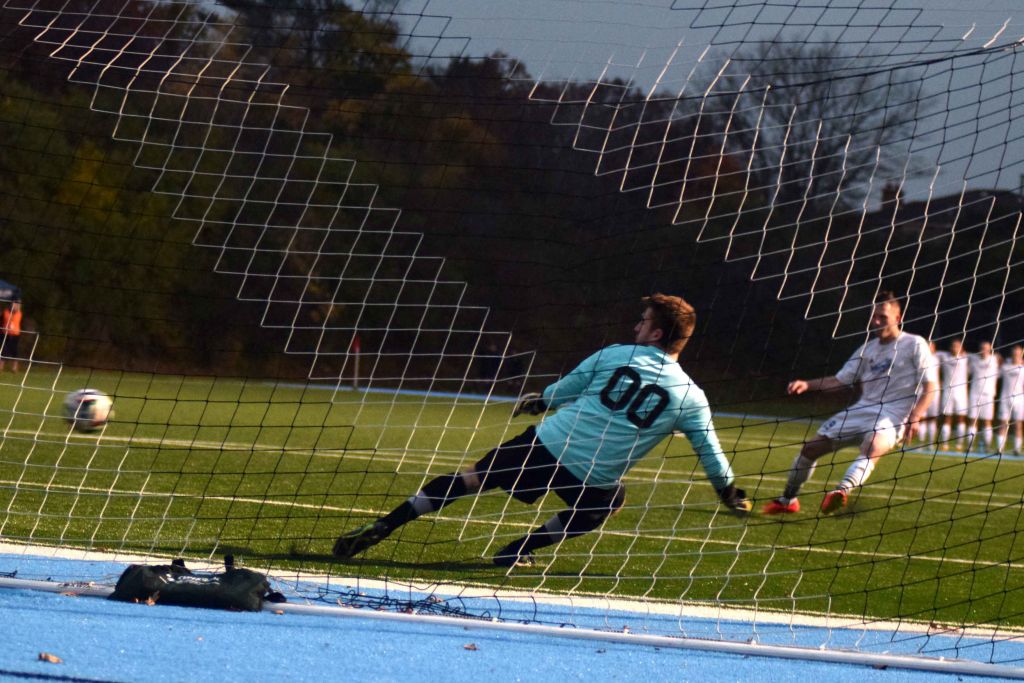 Luke Phye puts his shot by Simon Brown during penalty kicks in the CCAA men's soccer semi-finals. The Thunder lost in 4-3 in penalties.

The sky opened up and it began to rain as full time ended and the Algonquin men’s soccer team was tied 2-2 with Vancouver Island University (VIU). Perhaps it was symbolism, as the Thunder’s chances of a gold medal were washed away, losing 4-3 in penalty kicks to the number five-seeded Mariners.

“Obviously we think we deserved it,” said Alex Asmis, midfielder for the Thunder. “We let two goals in quickly and we had to battle back. We weren’t prepared I guess, for the PK’s. They can go either way, it’s literally a 50-50 chance and unfortunately it went their way. I don’t think that’s a good way to decide the game but hey, life goes on.”

Following a hard fought 90 minutes the teams forewent extra time and immediately went into penalty kicks. Maher Husseini, Reda Ghazal and Stephane Emard scored but Kishoyian Kipusi and Abe Kamara, two of the team’s best scorers, both missed wide left. Keeper Simon Brown stopped one shot, but was unable to come up with another save, even after guessing the right side on a shot by VIU’s Aly Adeeb.

Algonquin worked hard to even force penalties after falling behind 2-0 after 20 mintues. A goal late in the first half by Isaac Johnson gave the team momentum heading into the locker room. It looked like the Thunder would replicate their effort against Sheridan on Oct. 24, when the team fell behind 2-0 before a late first half goal led to the team rattling off four straight to win the OCAA semi-finals 4-2.

However the Thunder could not capitalize on most of their chances in the second half. Finally in the 84th minute, Kipusi scored on a rocket of a shot that tied the game at two all.

“They were battling hard, they stuck to it. They defended well, they got their men back and unfortunately we couldn’t put more of our chances away,” said Asmis.

The game had a slower pace than the Thunder typically play, as the game had plenty of injuries, substitutions and yellow cards including five for Algonquin.

The team will now have to regroup quickly, as they still have a chance at the bronze medal. The Thunder will face the Northern Alberta Institute of Technology (NAIT) Ooks tomorrow at 10 a.m.