Thunder, but no lightning 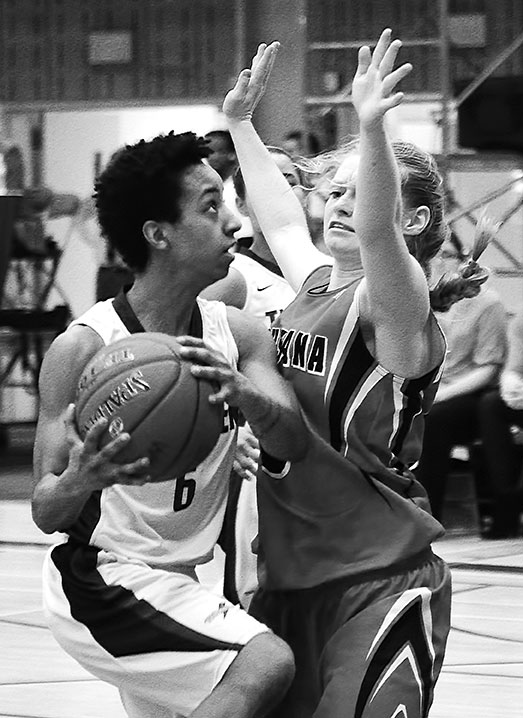 Algonquin Thunder suffered two heart-breaking losses in the national championship at Champlain College, losing their chance to play in the gold-medal game and the chance to finish in the top three.

Despite their perfect regular season and their flawless victory in the provincials, the ladies fell short this time around.

In the gold semifinals on Friday, the Thunder saw themselves going up against the St. Thomas Tommies, with the medal within grasp. However, with only seconds left on the clock, the Tommies’ Lindy MacDonald, went for a three-point shot and scored, winning the game 72-69.

By the end of the first half, the Thunder were winning with an impressive 18-point lead with Kim Cupid, guard, leading the team with 10.

The second half seemed to be out of the Thunder’s control, as they gave up their seemingly secure lead.

By the end of the fourth quarter, the game was tied, with both teams fighting for the lead.

Even though the Thunder lost their chance at a gold title, they still had a chance at winning bronze, facing off against the MacEwan Griffins in the bronze game.

Sandre Bascoe, forward, led with six points by the end of the second quarter, but seemed to be the only one scoring baskets.

The Thunder was trailing the Griffins 40-21 by the end of the half, with dreams of a bronze medal slowly fading.

By stepping up their game in the second half, the Thunder managed to even out the score, 46 all, but failed to compensate for their first half shortcomings.

The Thunder, losing the bronze game and the last chance for a medal, placed fourth in the nationals.

“I think I’d be lying if I said the loss on Friday didn’t affect our performance. None of us wanted to play in the bronze medal game. We came for gold. So it was really tough to bounce back,” said Lindsay Whittaker, forward.

After coming off a loss in the gold semifinals, it seemed as if the Thunder were defeated in more ways than one.

Besides the two devastating defeats, the Thunder did have two noteworthy wins against long-time rivals.

Their third game was against the Augustana Vikings, in the bronze semifinals. In a not-so-packed stadium all you could hear from the Thunder bench was “Thunder! Thunder! Defense! Defense!” and cheers from the outnumbering Thunder fans with every basket scored.

The Thunder trailed in the first quarter, picking it up after some inspirational words from John MacInnis, their head coach.

“We had a tough start, the kids reliving last night,” said MacInnis. “It took us a quarter to get back.”

The Thunder doubled the Vikings second quarter score and ultimately took the lead at the end of the first half, 33-26.

The Thunder’s game started to go down hill in the third quarter, letting the Vikings tie it up by the end.

“We have to take care of the ball,” said MacInnis. “It was a half-court game. I think the girls had tired legs.”

The last quarter proved the ladies had some strength left, winning the bronze semifinals, 68-61.

“It took us a little while to get started, but the girls decided to fight back,” said Bond. “We came out swinging.”

The Thunder showed promise in their first game against the Holland Hurricanes, crushing the team 104-57.

The Thunder couldn’t have showed any more spirit in the first half, almost doubling their opponent’s score at 47-26. The Thunder didn’t let up, with Claire Abbott, guard, taking the lead in scoring with 15 points at the half.

The Thunder showed an even more impressive second half, barely letting anything get by them. They left nothing to be desired in the quarterfinals, nothing short of a perfect performance.

No matter the outcome, the ladies seemed to be in high spirits.

“This weekend has shown there is a lot of work that has to be done off the court both mentally and physically,” said Whittaker.

“Even though it was not the result we planned for, we worked hard and gave it all we had, and that, at the end of the day, makes us champions in my books,” said Lauren Carey, guard.