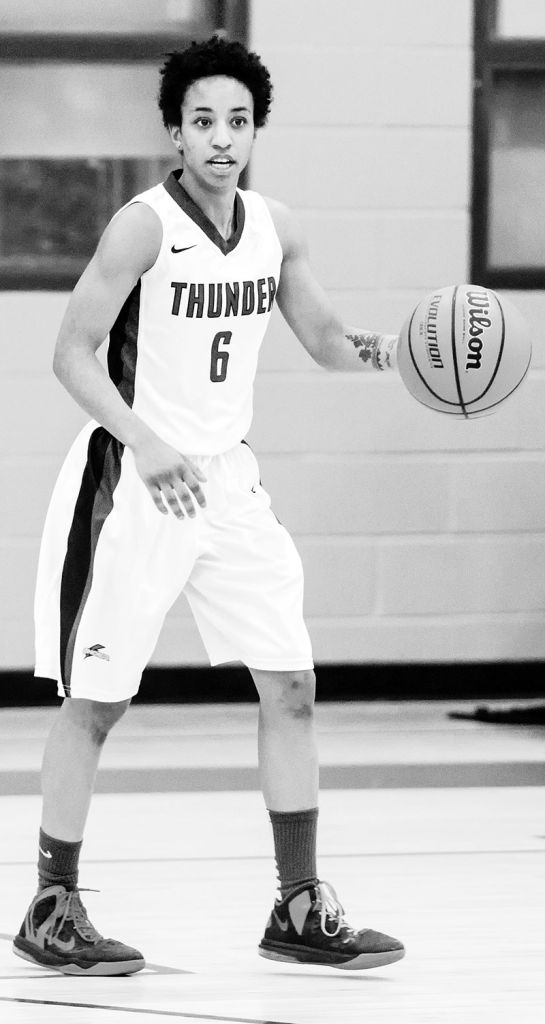 The Thunder women’s basketball team (10-0) maintained their claim to the Eastern Division throne on Jan. 18, dispatching the Fleming College Knights (0-10) by a score of 102-22.

Currently the fifth-ranked team in the country, Algonquin shot nearly 50 per cent from the field in the afternoon match-up.

Kim Cupid commanded the court with 16 points, reaffirming her place at the top of Thunder’s lineup. The second-year guard was 8-for-13 from the field and was one of four Thunder women to reach double-figures in the win.

Thanks to crisp inside passing by the Thunder, the team had the game in control from the opening minutes, taking a dominating 36-2 lead by the end of the first quarter. Algonquin pushed forward with offensive plays showcasing a combination of expert ball-handling and reverse layups.

“We’ll take wins,” said head coach John MacInnis. “But it’s just that with these games we don’t worry about points; we worry about how we’re playing.

“We are very athletic, so we want to continue to run the ball maybe a little more efficiently than we are now.”

Capitalizing on Fleming’s numerous turnovers propelled the Thunder in the second and fourth quarters, leaving the Knights unable to keep up the pace.

However, even letting in a few points motivated Thunder guard Lauren Carey to share her coach’s sentiment.

“Coach has a theory; you never get too high on the highs and too low on the lows,” the second-year law clerk student said.

Despite the lopsided score, she suggested the team’s focus should stay fixed on improving itself for the future.

“We need to work on our defensive composure so when we do face better teams we can lock them down,” said Carey. “This way, we’ll be successful as a unit.”

But nothing could wipe the smile from Claire Abbott’s face after the decisive game.

The second-year general arts and science student was anxious to return to the court she had left with a hyper-extended knee injury during last year’s Nov. 30 win over the Seneca Sting. Since then, she’s been gradually working herself back into shape.

With her eight points in just over 13 minutes of play, Abbott admitted she still has a lot of work to do.

“I’m definitely a lot slower than I was,” she said. “Working out and running on my own, and working on foot speed, is crucial if I want to be able to play like I did before.”

Frustration began to set in for the Knights by the third stanza, with some of their players becoming visibly upset at the widening score spread. Unable to slow down the Thunder’s aggressive offence, the small team of eight appeared exhausted by the fourth quarter. By that time, three of their players enduring nearly 40 minutes of court time each.

“We gave what we had from the get-go and the girls worked hard,” said Fleming’s head coach Shawn Whitney. “The reality is that Algonquin is a top-notch team and program.”

As the final quarter’s clock ran out, the cheers of Thunder basketball players, family and friends echoed from the college’s gymnasium. Nick Desbiens, a first-year pre-health sciences student, was brought to his feet by the continued success of the women’s team.

“Being at the games this year and seeing the team in their current state is great,” said Desbiens. “I’m hoping they carry their success into the provincials.”

“I think that there is no doubt that this year’s team is probably one of the most talented and deep teams we have ever had,” he said.

Coming up, the Thunder will be on the road when they visit Seneca and Georgian College on January 24 and 25. Seneca (5-6) is two games ahead of Georgian (3-8).