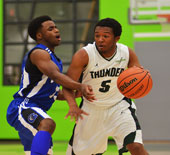 Guard Courtney Dawkins tries to dribble past an opposing player. The third-year put up five points, two rebounds and a steal to help his team to victory.

Strong and hard-fought games are what the Algonquin Thunder men’s basketball team thrives on and, despite a tough start, Algonquin eventually cruised to an 85-71 victory over the Georgian Grizzlies on Nov. 9.

The first three quarters had an exciting back-and-forth pace by both teams. Both showed up to win, but it was the Thunder that would eventually come out on top, putting up 21 points in the fourth quarter compared to the Grizzlies’ 11.

“Georgian has a tradition of coming here and shooting their best,” said Thunder head coach Trevor Costello. “It doesn’t matter what their record is. They started off hot again and I knew our guys would weather the storm and eventually come out on top.

“Every time they made a run and got it close we made a run and pushed the lead up,” said Costello. “We’ve got a good group of guys and a very deep team, but we both came to play tonight.”

Emotions ran high for both teams all game long, with two players on each team fouling out in the last quarter of play.

The game had a combined 54 fouls across the four quarters.

“If you talked to their coach he would probably tell you the same thing,” said Thunder assistant coach Jim Langis. “I think it’s just a matter of watching our emotions.”

Although Algonquin starters Tyrelle Samuels and Njuguna Waibanjo fouled out in the last quarter, it gave the team a chance to show just how deep it is. The Thunder would eventually take advantage of the number of fouls both teams had.

“Everybody that came in contributed,” said Langis.

“We’re a deep team. Courtney Dawkins came in and played big minutes in the final quarter. Haidar El Badry came in and hit some big threes, which is what we expect from him. Our big guys rotated well and our veteran guys took over the offence when we needed it.”

“It was good to see Derrek Mooney see the ball go through the hoop a bit,” said Costello.

“He has had a little bit of a shooting slump the last couple of games so it was nice to see him making a couple of shots. Our two star guards were all right but they weren’t getting any calls, especially Njuguna. It was frustrating for him but it’s part of the game and we’ve just got to play stronger.”

Algonquin added a pair of road wins on Nov. 15 and 16 against Loyalist and St. Lawrence respectively to stay atop the East Division.  They play four home games in a span of eight days to close out 2013.