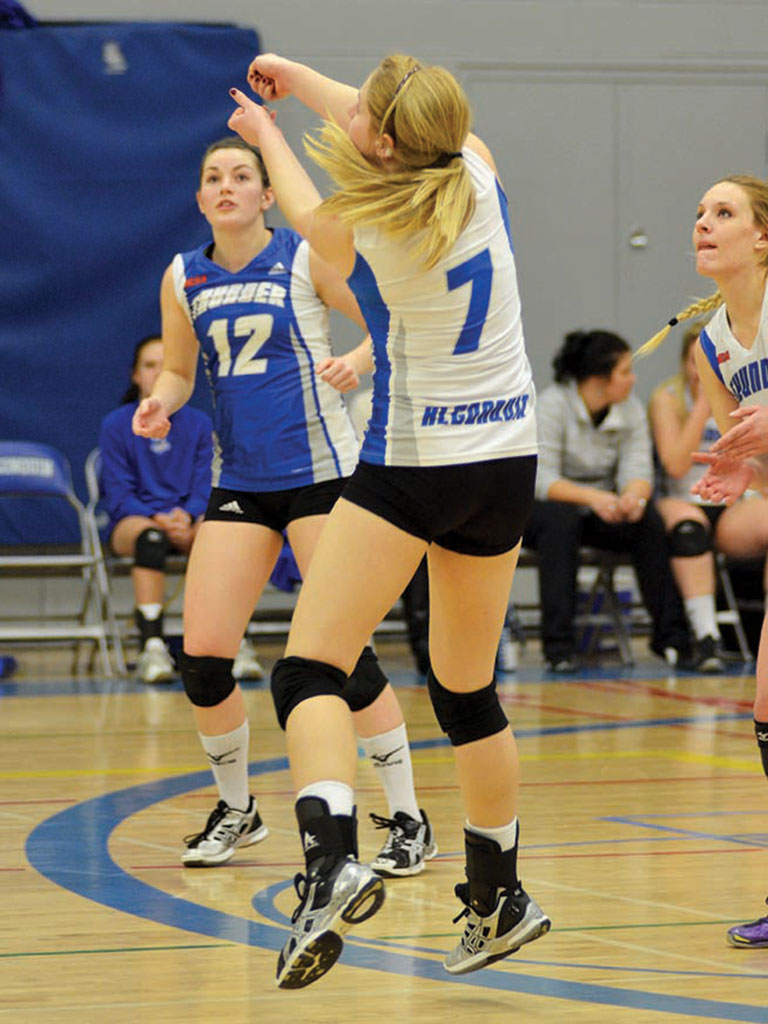 The Algonquin men and women’s volleyball teams took two different roads to victory on Friday, Feb. 8, but both teams showed dominance and perseverance when it counted most.

The Thunder women started off well, pulling away from the Seneca Sting in the first set with strong plays from middles Alix Burkart and Breann Wheeler, who had five and nine kills respectively in the matchup. The Thunder took the first and second sets 25-14 and 25-22, showing well-rounded passing and defense.

“I know the girls were probably looking at me to call a timeout when it was 5-1, but I wanted them to know that I believed in them, that they could comeback,” said Head Coach Everton Senior.

“When it got to 10-2 I told them we need to regroup and win the ball back, chip away bit by bit because there is a lot of game left.”

Though the win came at a price as Burkart injured herself during the second set. “I went up to block and I think I came down on someone’s foot and I felt my ankle roll and pop. It just happened so fast,” said Burkart about her injury. She returned for one play in the third set but was immediately substituted off after it was evident she was not OK.

Tess Peterson replaced Burkart for the remainder of the match.

“Any kind of injury we get right now is almost devastating for the team because we only have nine players and we don’t have a back-up middle,” said Everton on losing Burkart.

The third set was closely contested throughout, with the teams going on strong rallies against each other. In the end the Thunder came out on top, defeating the Sting 26-24 and winning the matchup 3-0.

Meanwhile the Thunder men took a much more difficult route against the Sting. They lost the first two sets against Seneca with close scores of 25-22 and 25-23. They were close sets but because of service errors from the Thunder, the Sting were able to take a 2-0 lead into the third and possible final set.

Facing a loss, Algonquin picked up momentum and came out firing on all cylinders. Led by an explosive game from left Philippe Yeldon who led the team with 24 kills and 7 aces in the matchup, the Thunder were able to defeat the Sting. An equally impressive game from left Alex Oneid, who had 18 kills, allowed the team to take the third and fourth sets to push for a game-deciding finale.

“The first two games were more nerves than anything, a lack of trust of what we’ve been doing,” said Head Coach Jay Mooney. “By the end of the second set the talk on the bench got more positive in terms of what we should be doing and carried it onto the third, fourth, and fifth sets.”

The fifth and final set was a thriller as the teams traded points back and forth until they were tied at 12. The Thunder took charge after that and never looked back, scoring three straight points and completing the comeback. Algonquin took the game 3-2 over Seneca in incredible fashion.

“It was a hard game, a must-win for us to get ready for provincials,” said Yeldon. “Those close games like that really get us ready mentally.”