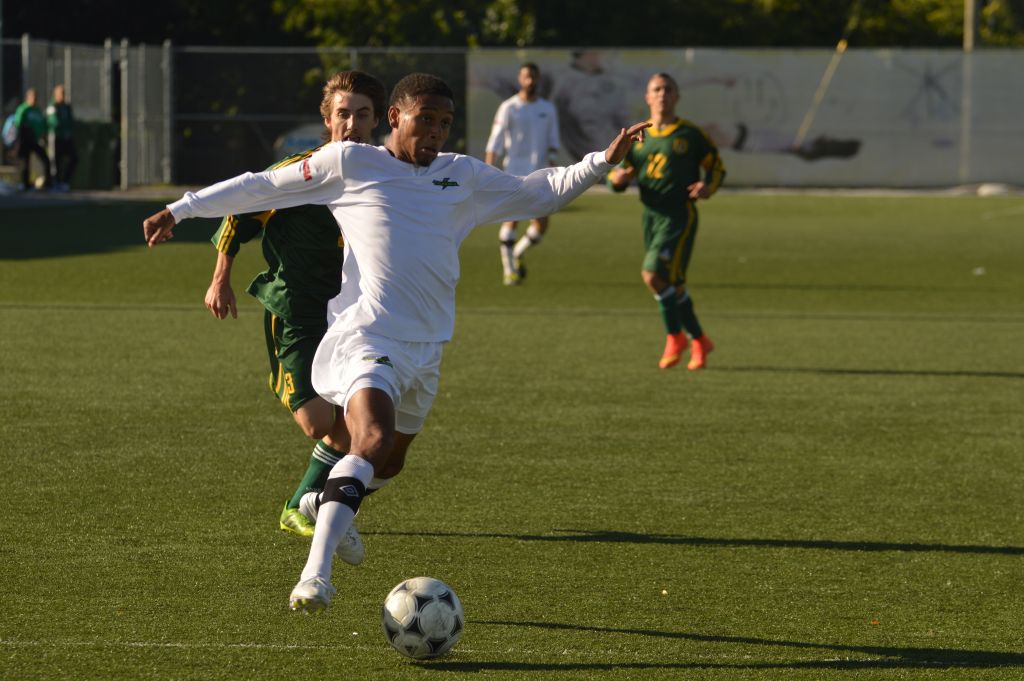 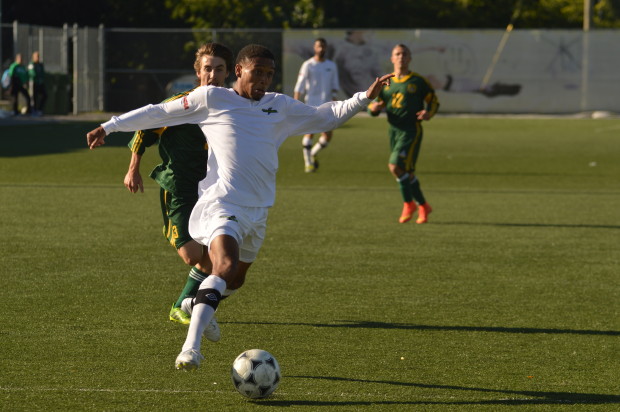 The Thunder men’s soccer team added to their perfect season with a thrilling win over the Durham Lords on Sunday, Sept. 14, their second game in as many days.

The first half was even, with both teams possessing the ball for roughly equal time. Quality chances were had at both ends, but it was Thunder midfielder Lucas Blain, a 19-year-old rookie, who scored the go-ahead goal in the 10th minute with a diving kick that forced the ball past the Durham goalkeeper. It was his third of the season.

The home side took control in the second half, dominating Durham with speed, brilliant plays, and long stretch passes which seemed to break the Lords’ defensive ranks and had them on their heels for most of the rest of the match.

Midfielder Alex Asmis, 18, headed in his third goal in three games in the 53rd minute off a well-placed corner kick from defender Jemuel Paul, 19, that made it through the crowd in front of the net. While forward TJ Turner, 22, scored the winning goal, his second of the season, after 74 minutes on a long stretch pass by returning captain Stephane Emard.

“I stepped up to the ball, and coach told me to pick out either Alex or Isaac, and I gave it to Alex and he finished it,” said Paul after the game. “We were calm and under pressure, but we capitalized when we had chances and I think we played well.”

Goalkeeper Simon Brown, 22, made fantastic saves in the final minutes of the game to keep a last-minute offensive rush by the Lords at bay.

“It was a tougher team to play against so we had a slow start, but we stuck it out and we finished well,” Emard, 25, said of his team’s play. “It was a long weekend and we had a lot of heavy legs, but we used our bench very well today.”

“We had the same preparation we have every week,” said head coach Mike Gagliano of how his team got ready for the game. “We go through our tactical sessions, make sure everyone’s on the same page, and lots of focus on set pieces.”

Coming into this season with momentum from last year, being 2013 OCAA East Division Champions and OCAA Silver Medallists, the squad entered the game coming off a 6-0 home-opener rout over Fleming College on Saturday, Sept. 13, played in a torrential downpour.

“The result was good,” said Gagliano about Saturday’s game. “I thought we had flashes of good stuff. It was tough to play on the pitch, a little bit of waterlog, but I thought movement for the most part was good. So we’re going to take that into today.”

Playing in more favourable weather on Sunday, the club continued to show their opponents that their winning streak will not end without a fight.

The men’s next home game is Saturday, Sept. 27 against Seneca.