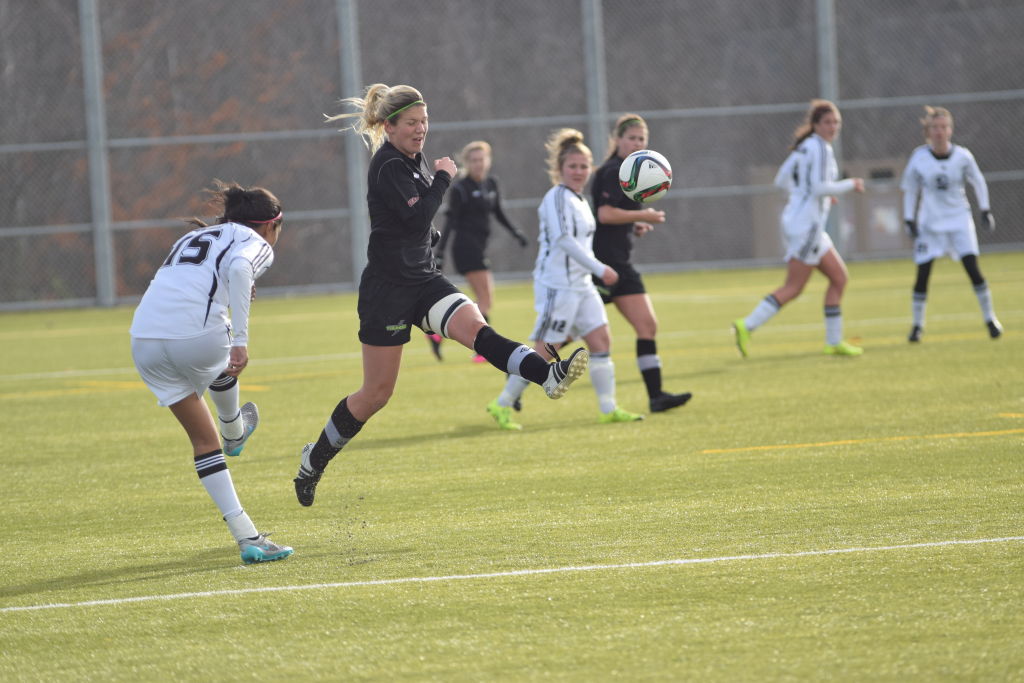 The Algonquin Thunder were hoping to bring home a medal from the women’s soccer CCAA nationals in Peterborough, Nov. 11 to 14. However, the team finished in fifth place after two heartbreaking losses in penalty shootouts.

The team’s first loss of the year after an undefeated season and a flawless trip to provincials, came from l’Indiennes Ahunstic of the RSEQ conference on Nov. 11. Both teams were unable to score in regulation time and it was sent straight to penalty shootouts.

The first seven shooters for both sides were able to find the back of the net. When Ahunstic was leading 4-3, Algonquin’s CCAA All-Canadian player Sylvie Avedissian came up to take her kick and missed off the crossbar, and the Thunder lost 1-0.

“I honestly just blacked out,” said Avedissian. “It just sucks that everything you work for all game comes down to this one kick.”

The second loss of the tournament came in Algonquin’s third game against PACWEST’s Douglas Royals on Nov. 13. The Thunder led 2-1 at the half from Thunder goals from captain Kandyce Whitehead and defensive player Jenna Baldree.

There wasn’t another goal in the game until the final seconds in injury time when the Royals’ Mami McMillan scored the equalizer.

There wasn’t another goal in the game until the final seconds in injury time when the Royals’ Mami McMillan found the back of the net.

The goal also came after a controversial referee’s call. The Royals had a corner kick and the ball went off a Royal player, yet the Royals were given another corner kick which allowed them to score.

One of the team’s captains, Kandyce Whitehead, suggested the team played a strong game besides the final 10 minutes.

“We started hanging back too far and letting them at us too much,” said Whitehead. “They took advantage of that. We never should have stopped attacking and kept the pressure on them, and instead we let them put the pressure on us.”

When the Royals led 4-2 in the penalty shootout, it was up to Vanessa MacMillan to keep hopes at bronze alive.

“You can’t replicate the pressure situation of penalty shootouts at nationals,” said Oliveri. “You can practice them 100 times but the reality is, the best players in the world miss in the same types of situations.”

Her kick went off the post, and the Thunder lost the game with a final score of 3-2.

“With penalty kicks, it’s the worst way to lose,” said rookie midfielder Haleigh Robertson. “As a team you’re trying to fight for it. But it’s just one person. One goalie. Trying to shoot and finish.”

The other two matches the Thunder played were victories, including a 6-0 trouncing of the Fleming Knights.

“I don’t think anyone saw the best of us,” said Oliveri. “I don’t think we played a complete 90 minutes at any point during the tournament and it’s something we have to look at as coaches.”

In the fifth place final, the Algonquin Thunder faced off against their namesake – the Concordia Thunder. Algonquin proved to be the stronger Thunder, winning 4-1, scoring four goals in the game’s second half.

“It was important we ended (the tournament) on a good note,” said second-year forward Darby Perry, who had two goals on the day. “We had to leave feeling like a team.”

Oliveri cited the current road to becoming a nationally prominent program as part of the process.

“For us it’s a step forward,” said Oliveri. “You have to learn by losing – experiencing the level, experiencing the competition. We always have to grow and we’ll learn from this experience and be a better team for it next year.”