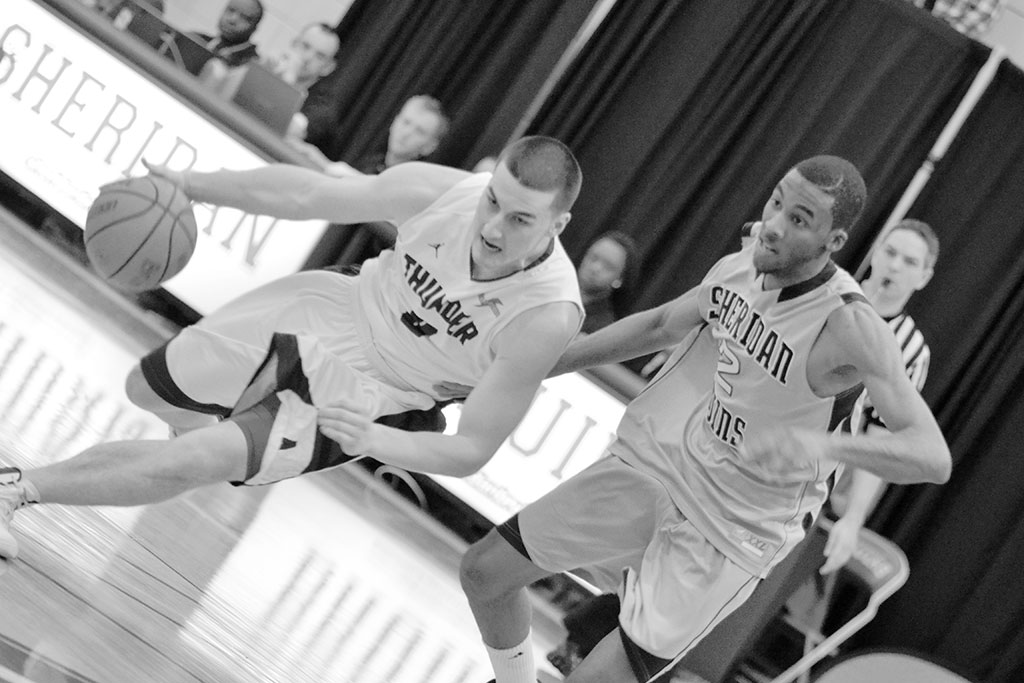 Only after Derek Mooney’s last second shot clanged off the rim, was the game finally decided. There would be no perfect ending to the year for the Thunder. Instead, the host Sheridan Bruins (18-3) would repeat as Ontario Colleges Athletic Association (OCAA) Champions on the strength of a 76-75 win.

“I don’t want to try and be quick-witted, we scored one more point, that’s it. We didn’t do anything better than (Algonquin),” said Sheridan head coach Jim Flack. “It comes down to a final possession where their best shooter has a tough, but open look, and two inches to the left and we lose.”

As he had done all year, Algonquin’s Njuguna Waiganjo carried the team down the stretch, scoring 33 points, and matching every shot made by tournament MVP Michael Selkridge, 18 points. The duo traded big plays in the second half keeping the margin razor-thin until the very end.

“We knew what we had to do coming into this tournament,” said Waiganjo. “We knew how all these teams play, but it wasn’t meant to be. I’m a man of faith and God already wrote this script, so we can’t really beat ourselves up.”

The Sheridan crowd was raucous throughout. Algonquin came close to silencing the near capacity crowd in the second quarter, when they led 41-31. But Sheridan rattled off 15 straight points to enter the half leading 48-44.

“They’re a team that plays off of hype, so the crowd was definitely a sixth man for them,” said Waiganjo. “It was a great competition, a great game, and my hat goes off to Sheridan.”

Following the game, Waiganjo and teammate Tyrelle Samuels were named to the tournament all-star team.

The Thunder couldn’t have been hotter heading into the finals, beating the Humber Hawks 75-48 a day prior on the strength of 41-12 second-half beat down.

“I can’t make excuses,” said head coach Trevor Costello, following the emotional loss. “Excuses are for losers and I’m not making any, (Sheridan) were the better team on this day.”

The Thunder opened the tournament by continuing their dominance of east division rivals, the Durham Lords, winning 89-70.

With only the OCAA champions advancing to nationals, for a handful of these men this marks the end of their Thunder playing career.

“It was disappointing in the end because we have a lot of veteran guys and if we were going to make a run, this was a team that could do it,” said Costello. “Who knows when we’ll have a team like this again?”

“Everything we’ve gone through as a team, from day one up to right now, I wouldn’t trade it all for anything in the world,” said Waiganjo. “I just thank the Lord, I thank my teammates and my coaches for everything.”