Men have bronze and brains 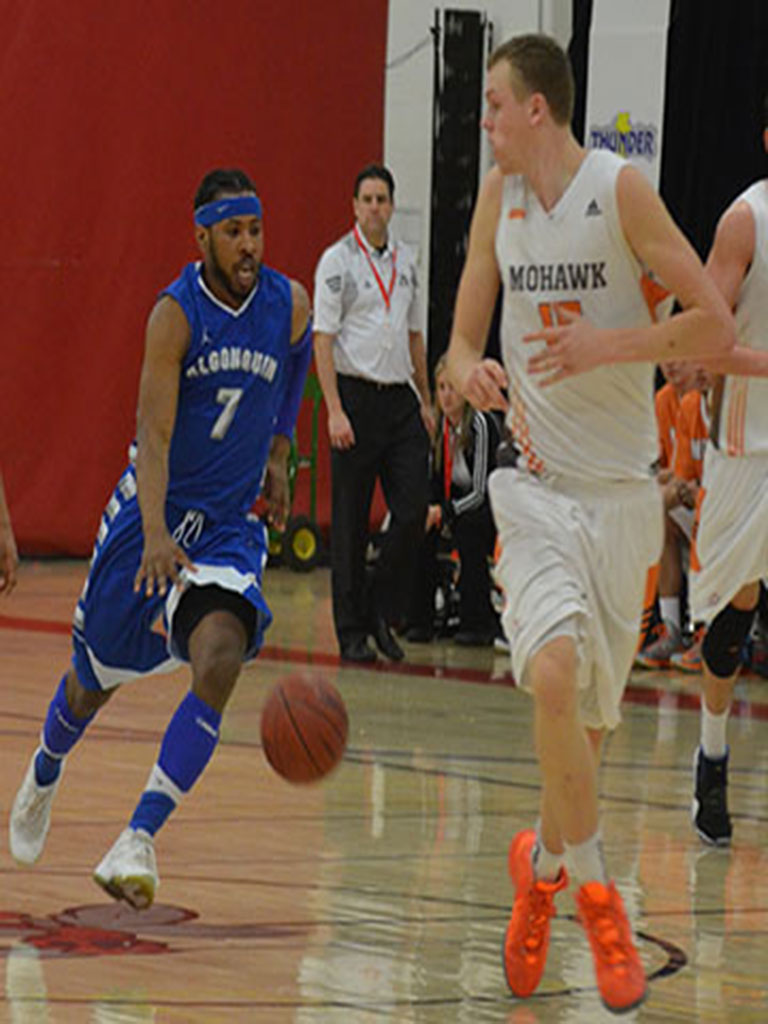 After a tough loss to Mohawk College in the first round, the Algonquin Thunder turned their game around to finish third overall at the Ontario Colleges Athletic Association Men’s Basketball Championship in North York.

“It was an extremely emotional loss across the board,” said forward Garnet Blais. “It was the most negative junction in our season because in most people’s eyes, it was over.”

But the OCAA bronze medallists regained their spark and advanced on to the next round of the championship, going undefeated in their remaining games.

“After losing to Mohawk, everyone was pretty down that we weren’t going to make it to the gold medal game,” said Thunder guard Malcolm Brown.

“The coaching staff stayed positive and told us that we should set a new goal and go home with something around our neck. Therefore, we stayed motivated and played every game like it was for the gold,” continued Brown.

The Thunder had to quickly shake off their loss as they played the Humber Hawks the next day, on March 1. In the evenly matched game, Algonquin managed to defeat the Hawks 76-65. Algonquin guard, Romaine Lawrence, finished with 17 points and five assists while Garnet Blais, forward, amassed 14 points and two assists. He was later named player of the game.
“Once the game started and got out of the early stages I think, for most of us, pride kicked in,” said Blais. “I didn’t want to end our season with two losses because we were better than that. We showed that we deserved to be there and for me personally, going forward, it was a very uplifting moment.”

On the second day of the tournament, Algonquin faced the Fanshawe Falcons. The winner would then move on to the bronze medal game. The Thunder led early but fell behind in the second quarter, eventually pulling ahead in the final half of the game and finishing with a score of 80-76.

The Thunder was led by Lawrence and Blais, who finished the game with 32 and 24 points, respectively. Nehemiah Campbell, guard, added 11 points and four assists. The victory against Fanshawe secured them a place in the bronze medal game.

“Nehemiah had a great weekend, played well on both ends of the floor,” said Blais. “His mid range floater was falling in bunches.”

As Saturday afternoon rolled around, the bronze medal in their sight, the Thunder faced the tournament hosts, the Seneca Sting. Crowds gathered to watch the game which Seneca led 20-8 after the first quarter. Algonquin picked up their game in the second but it wasn’t enough as the buzzer went off for halftime, leaving the Thunder trailing 35-29.

When the Thunder returned from the break, Lawrence upped his game and the Thunder finished the third with a marginal four point lead.

With the fourth quarter set to begin, Seneca wasn’t ready to hand over the win to the Thunder, but Blais opened the scoring with a quick three-pointer and it was all Algonquin from that point forward.

Blais was quick to praise his teammates’ efforts though, crediting the team’s cohesion in the win.

“We played good team basketball in our last 3 games,” he said. “Everyone contributed and that is why we won bronze.”

Algonquin secured a bronze medal thanks to contributions from OCAA all-star Romaine Lawrence, who scored 20 points and went 5/11 from beyond the arc which included sinking multiple three-pointers.

“Romaine Lawrence and Garnet Blais came up very big this weekend,” Brown said. “Without Romaine’s scoring and Garnet’s intimidation, we wouldn’t have accomplished what we did.”
This was Algonquin’s first medal since winning silver in the 2009 OCAA provincial championships.