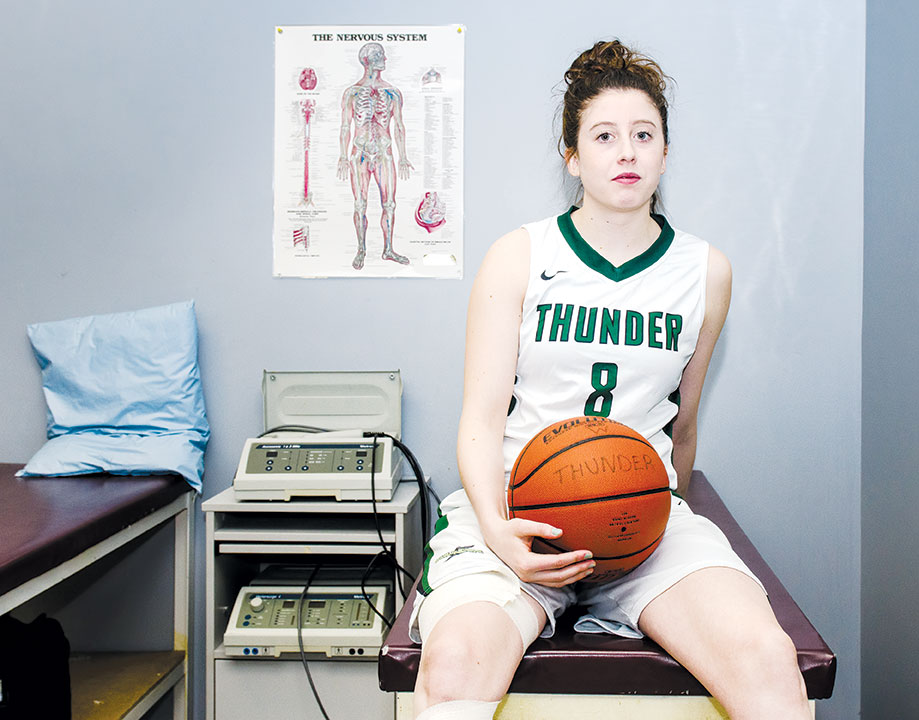 Claire Abbott may not recall crumpling onto the court, but she certainly remembers the excruciating pain.

It was Nov. 30, 2013 and the Thunder’s last game of the OCAA eastern conference Fall season.

The women’s basketball team were on the final stretch to win a blow-out 75-44 game against the Seneca Sting.

Yet, the victory would end with a nightmare woken up by a terrifying scream; a noise only heard when a bundle of flesh and a season’s future are torn apart.

Racing across the court with offensive efficiency, Abbott took advantage of a breakaway layup attempt. However, she didn’t notice the Sting defender approaching behind her.

Suddenly, the Thunder forward found herself lying on the hardwood of the basketball court, grappling with the sudden urge to grasp her knee.

A reverberating shock forced her to scream, crying with frustration and torment.

In the athletic world, it is a noise that causes jaws to drop and eyes protrude.

“You knew she was hurt based on the sound that came out of her,” said her father, Geoff Abbott, watching from the crowd. “Claire is a tough player, she does not make a reaction unless it is something that is really bad news.”

The physical trauma would quickly pass, but the insecurity of whether she will ever be whole again would not.

For Abbott, this turned pain into rage.

“Get me out of here,” she remembers telling herself as a Thunder sports therapist ran onto the court to assess the 19-year-old. “I was so angry… it was our last home game and there had been only a minute left.”

Abbott had sprained her anterior cruciate ligament (ACL), and suffered bad bone bruising.  The hit to her knee had jarred it but failed to snap the ligament, a painful but fortunately not debilitating injury.

Nevertheless, a painstakingly slow physical and mental rehabilitative process would await her, taking upwards of a month to complete.

“I knew it would be a slow transition,” Abbott said, referring to a resume of injuries she’s suffered through the past. “Self-discipline was huge, to take it slow and train in a way that would strengthen but release the built-up tension at the same time.”

Now two months after the Thunder forward went crashing down in the final minute of play, it’s hard to think of another player that has embraced an injury as swiftly and determinedly as Abbott.

An observer would look up and see the starter streaking down the sideline, complete with athletic tape wrapped around her right knee, approach the 3-point line and stop. She handles the ball with ease, double-checking her arches, back, and hips. She’s the fly fisherman of the court, a caster whose shot relies on a keen sense of acute co-ordination.

The ball is cast into the air, a skyhook upwards to fall coolly, but professionally, in between the rim.

Making 24-76 of her three-pointers, Abbott ranks as the 10th best three-point shooter throughout the entire OCAA league, while her percentage, 31.6, places her at seventh.

Her point total rests currently at 181, with a spread per game of 11.4 overall. Both point statistics place her in the top 25 of players in Ontario.

“Claire is one of, if not our most consistent shooter,” said Sandre Bascoe, Abbott’s teammate and close friend on and off the court. “She understands the game.”

“Claire has excellent basketball I.Q.,” said MacInnis. “She understands the game, its system, defences, and offences.

“She’s someone that gets things quickly.”

But not only does she have a tendency to make smart plays and the right decisions, she’s complementing the team in other ways as well.

“She’s a leader on the team,” said assistant head coach Laura Bond, who originally coached Abbott in Ottawa’s elite basketball youth programming scene. “Which is pretty hard for someone new in our program.”

Abbott’s personality is the reason for that. A mentor to younger or more inexperienced players on the team, she claims playing basketball at Algonquin means she has made 13 best friends.

“Every single player brings something different to the table,” Abbott said. “We are so diverse.”

Yet, despite the increased training (and sweating), Abbott is still working hard outside of basketball practice to physically and mentally prepare for provincials, and hopefully, nationals.

The future remains to be seen, but Abbott is, in her way, more ready than ever.

The competitive player looks forward to throwing few, if any, passes that defenders can get their hands on. She has shown a quickness in moving the ball since her return, shooting three pointers that few other forwards can make coming off a dash from the other side of the court.

“I’m more confident now,” she said. “But I feel I am putting more pressure on myself, especially with the championships around the corner.”

Deep breathing and other mental exercises taught to the team have encouraged Abbott to remained focused and calm before games. One such exercise is visualization.

This requires Abbott sit in the locker room before the game, headphones in and eyes closed.

In the background, the symphony of Abbott’s pre-game playlist can be heard – the southern twang of Keith Urban’s guitar, the sound of a thousand instruments colliding in an electric dance beat, the motivating yet sharp rhymes of hip hop artists.

Visualizing the court outside, she imagines she is already there.

The illusion of action begins with a jump shot. Interrupting the scene to ensure perfect form, she resumes play with a flick of the wrist and launch of the ball.

What follows the castaway is an elaborate silence, a follow-through she Abbott required to endure, anxiously waiting for the target to reach its destination.

She already knows how the scene will end: the shot will be sunk and the points earned.

As Abbott simply puts it, it is during this moment that “everything is awesome.”

She then leaves the locker room with her teammates, the roll of white athletic tape now left behind.