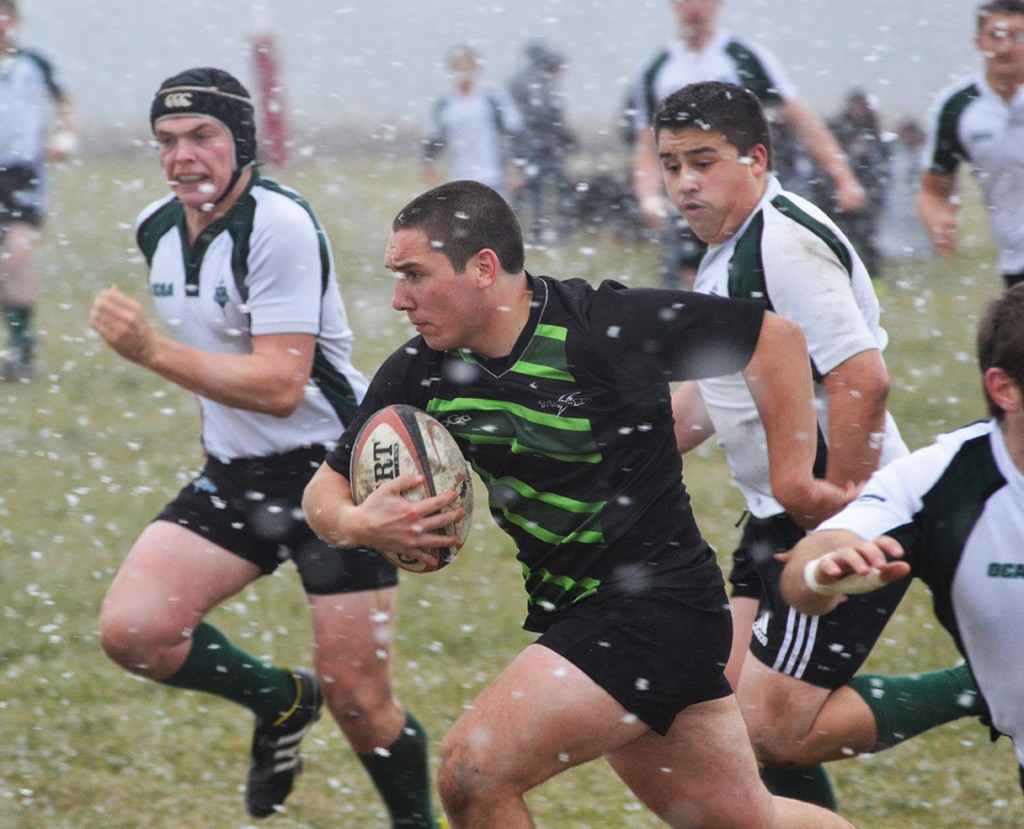 With the first heavy snow fall of the year billowing down in forceful blasts on the Twin Elm Rugby Park, the Thunder men’s rugby team punched their ticket to the Ontario Colleges Athletic Association rugby finals.

Despite having to constantly clear the snow to reveal the boundary lines of the pitch, the Thunder fought through the frigid temperatures to emerge from the snow with a 30-15 win over the Trent Excalibur in the OCAA semifinals on Nov. 9.

The Thunder were matched up against the Excalibur, who finished the regular season in third place in the East division in the OCAA.

After an extremely close first half, the Thunder exploded into the second half with a try on their very first possession, paving the way for the win in the East division finals.

The Thunder then had six days to prepare for the golden match up against the West division champions, Humber Hawks. The Hawks were the only other undefeated team through the six regular season games and registered the highest points-for total in the OCAA, with 350, and the lowest goals against, only allowing 18.

Together, the Thunder and the Hawks were the only two undefeated teams in the OCAA this season going into the final game.

Unfortunately for the Thunder it was not to be, as the Hawks made the most of home field advantage in their eighth consecutive trip to the gold medal match and beat the Thunder 24-16 on Nov. 17.

“I know our guys said they really enjoyed playing the game because of the consistent intensity and willingness of every player, on both teams, to not give up,” said Thunder head coach Geoff Tomlinson.

The Thunder led the game in the early going, but two quick tries on breakaway sprints from Humber winger Adam Chianello and fly-half Joseph Ginsberg gave the Hawks a 14-6 lead.

Thunder scrum-half Max Shafer would later make a block on an attempted clearing kick by Humber, which Shafer managed to pick up and take in for a try, putting the Thunder within one of Humber’s lead.

But unfortunately for Algonquin, that’s as close as they would come to knocking the Hawks off their throne, with Mitchell scoring the game-clinching try for Humber just minutes later.

“It made it a very compelling match and made it so that every player had to play their best,” said Tomlinson. “We’re now really respected because Humber has never had to play to that level.”

Despite the loss though, the Thunder coach insisted there were more upsides in the loss.

“There’s so many positives that come out of it. Yeah, it sucks to lose, but the guys know they left everything on the pitch and they’re going to be better for it,” said Tomlinson.

“I think they were surprised at how good we were. It will be a different result next year.”