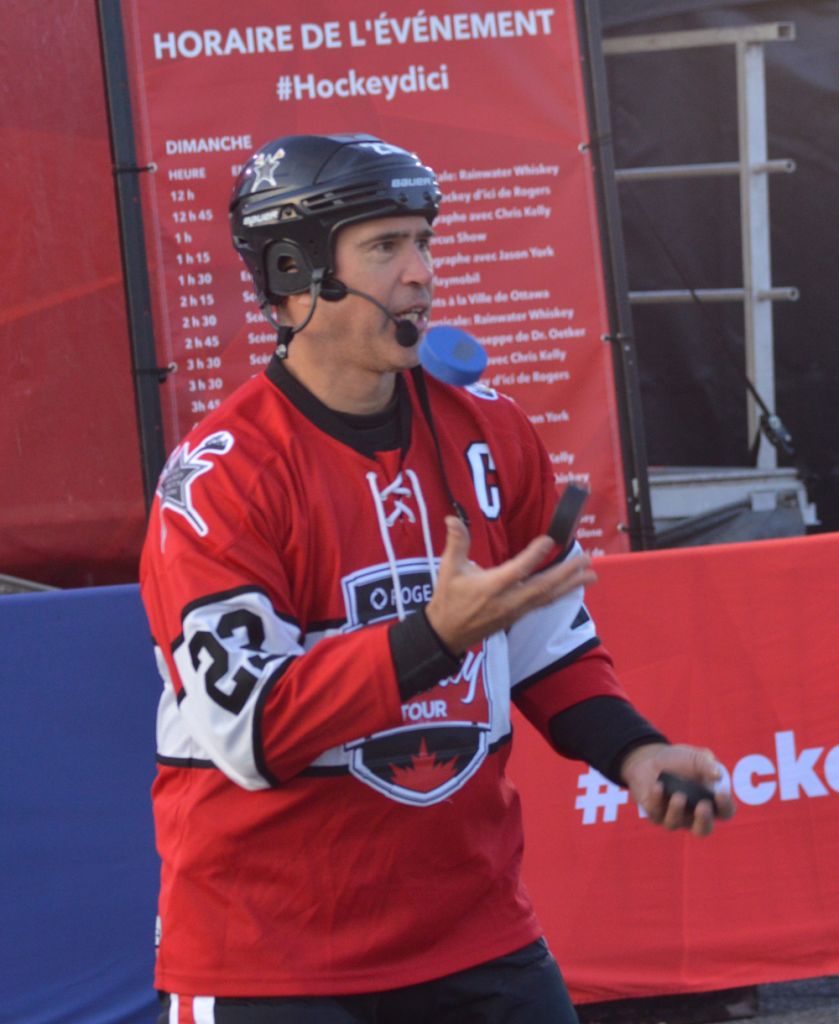 Performer PAZ juggling hockey pucks as part of his act during the Hockey Circus Show. The show ran both days, twice per day, during the Rogers Hometown Hockey event on Nov. 3-4. Photo credit: Jonathan Mulvihill

Rogers Hometown Hockey came to Algonquin for the first time on the Nov. 3 weekend, and was filled with many fun activities that both kids and adults could enjoy.

One event in particular that brought many laughs and smiles among the crowd was the Hockey Circus show, hosted by PAZ.

PAZ, who has been with RHH for the past four seasons, filled the show with jokes directed towards certain hockey teams, as well as showing off his acrobatic skills, culminating with him juggling three flaming hockey sticks in the show’s finale.

“I’ve been performing the circus arts for about 27 years now,” PAZ said after one of his performances on Nov. 4. “Before that, I went to law school and before that, I was a professional tennis player. So I’ve always kind of been a focused person. Circus for me is the ultimate, because I can be acrobatic, academic and artistic all at once,”

PAZ describes what is great about bringing Hometown Hockey to Nepean and more specifically to Algonquin.

“Ron [MacLean] really digs in, and Tara [Slone] does as well, into the individual stories of the community,” he said. “Algonquin is an incredible institution, bringing people up to a higher educational standard, and we need more of that.”

When Hometown Hockey approached him years ago with an offer to join with them, PAZ described it as a “mask that fit perfectly.

“I’m the only hockey tribute show in the whole world, so it’s only a matter of time if you’re doing an outdoor festival where you’re looking to have great crowds and great fun,” PAZ said.

He agreed to join the RHH tour because he was inspired by what it represents.

“For me, Ron is telling the story of the very fabric and culture of hockey throughout Canada, and I wanted to be a part of that because that’s what my show is about,” PAZ said. “My show tries to focus on the culture of the community coming together in a small space, experiencing something together much like a game, and having a laugh.”