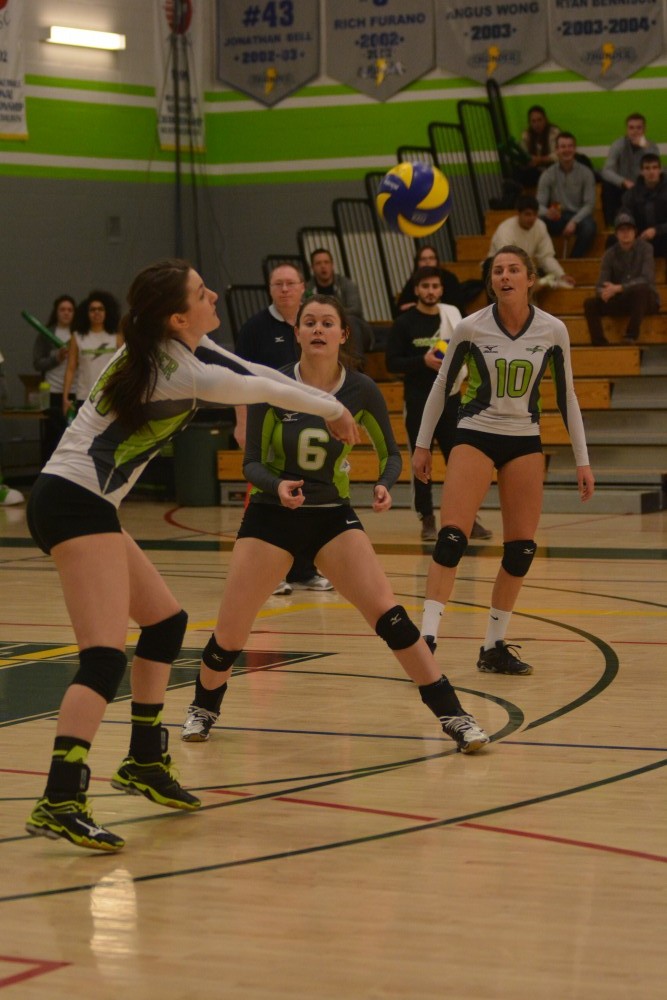 From left, Victoria Waizmann bumps the ball as Jane Baerg and Jamie Bullbrook watch Feb. 14 during their game against George Brown College. They went on to win all three sets of their last game of the regular season.

The women’s volleyball team’s rocky season has now officially come to an end after they lost their crossover game against Niagara for a playoff spot.

Their last game of the season regular season was Feb. 14, where they won all three sets against George Brown College.

“It was good to finish of the season on a positive note,” said coach Everton Senior after the game.

Algonquin needed to win Feb. 14’s game in order to qualify for a crossover game in hopes of a play off spot.

“We did what we had to do,” said setter Jane Baerg. “We wanted to give ourselves the best chance to make playoffs.”

Although Algonquin lost all three sets in their game against Niagara, they still remain pleased with their performance this season.

“I’m really proud of who we have become as a team,” said middle Julianna Tebrake. “It really paid of at the end.”

Third-year player Alixandre Burkart also said she was happy with this season and how the team has played.

Their defensive side of the game isn’t the only thing has improved this year as the team has been working hard on staying strong and steady.

“I think we have mostly improved our consistency,” said Jamie Bullbrook, a third-year player. “We’re finally in control of our side or the court.”

Looking onward to next year, Senior hopes that the team can make playoffs just like have in the past.