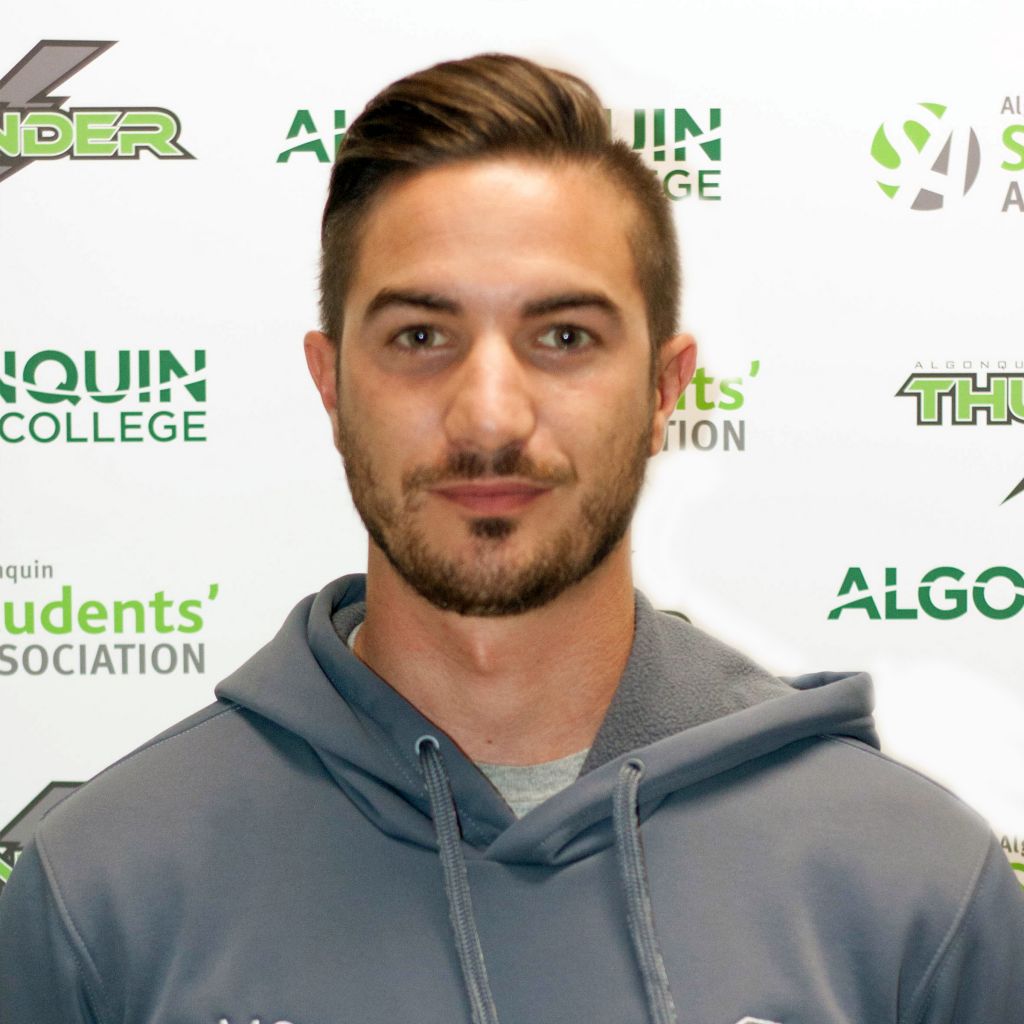 It is a beautiful September day to be outside playing a game of soccer. On the field, two teams face off against each other – the Algonquin Thunder, and the Centennial Colts. Centennial had just had a new field developed and this was the first game to be played on it.

Both teams try their hardest to overcome their opponents. By halftime, both had scored one point each. Algonquin quarrel among themselves in the locker room, when suddenly, their head coach, Michael Gagliano, walked in.

Gagliano, 31, tell the players they could do better. He tells them what he saw so far was not their maximum potential, and that he believed they could come back and take the win.

Sure enough, 10 minutes into the second half, Algonquin scores three more goals, taking a big lead against Centennial. By the end of the game, the Thunder reigned victorious 5-1.

Seeing his team claim victory, Gagliano is reminded of his lifelong love of soccer.

Born and raised in Ottawa, Gagliano acquired an interest in the game of soccer at around four years old. His parents had told him he would walk and run around everywhere with a ball in his foot. His father had partaken in the sport when he was at Algonquin, so he especially enjoyed kicking the ball around with his son.

He began playing competitively when he was nine years old. He had been playing multiple sports, but decided at age 11 to focus solely on soccer. The first year he played competitively, he didn’t make the squad.

“From there, I had a little fire burning inside of me,” Gagliano said. “I didn’t like not being on that first team. I wanted to really get better and improve.”

He grew up playing for the Nepean Hotspurs, his home club since he was 10.

As Gagliano grew over the years, so did his abilities. He said he learned the most by visually watching other people play, and then practicing at home whenever he had free time.

“I look back, and look at my upbringing compared to what kids have nowadays in terms of resources available and the coaches,” Gagliano said. “A lot of what I learned was through my training sessions and through games, and we were coached to play a specific way. So I did a lot of learning on my own.”

He attended Notre Dame High School and played for the men’s soccer team during his time there. He played one year on the varsity level, one year as a junior, and two years as a senior.

When he was in the ninth grade, he met Francesco Fotia. While he also played soccer, the two never crossed paths in that regard. Their friendship didn’t evolve until their university days, having been in similar programs.

“Mike is a great guy,” Fotia said about his friend of 17 years. “He’s very loyal, and will do just about anything for his friends.”

The main challenge Gagliano had to face during past years was his size. Because of his small stature, he would often be overlooked, and try to convince other players of his ability.

This was evident when he began attending Carleton University, enrolled in the bachelor of commerce program. In addition, he also had a desire to play for their soccer team.

However, despite wanting to join the team, he ended up not making the cut.

“I tried out the first year that I went there, and I was the last cut,” Gagliano laments. “I remember the coach saying he didn’t want to waste a year of my eligibility, and it was essentially because he thought I needed to get a bit bigger and grow. He thought I wasn’t ready for what was to come in college and university soccer, so I took that as a little bit of a slight. I had a chip on my shoulder moving forward. That’s when the fire inside of me started burning.”

He eventually joined the Ottawa Fury team during his stay at Carleton. At the time, the Fury played in the Premier Development League, which was targeted at university/college students. It allowed players to play at the highest level while maintaining their amateur status so they could continue playing for school team. He played there for three years as a defender.

Following the completion of his program at Carleton, he was lured to Algonquin by the coach at the time. During one of his games with the Fury’s, the coach had seen him play, and convinced Mike to come join the Algonquin community not only as a student, but as a member of the soccer team.

When he met the coaches at Algonquin, he was surprised they were not much older than he was at the time. He was used to having older coaches as a part of the team.

However, he found that they were easy to relate to, and got along with them well enough.

“You could tell that what they were doing was always at a really high, professional level,” he said. “It really sucked me in and gave me a good feeling about everything they were doing, so I was excited to come.”

Gagliano was a “sweeper” during his time on the Algonquin team, which was the last line of defence on the field. During his five years as a player, he spent four of those as the team captain.

One of his fondest memories was in 2006, when he led his team to win the National Championship that year.

“It was the highlight of all my highlights at the college,” Gagliano remembered. “I mean, it’s a team game. I did have a lot of individual accolades, but the best thing you can do is win as a team, because that’s where everyone comes together and takes joy in the moments you develop in those games.”

During his tenure on the field, the coaches constantly told Mike he would make a great coach due to his leadership qualities presented in the field. Also, some of his former teammates had gotten into coaching.

It was the current coaches’ decision to choose an assistant coach for the next year, and since Gagliano was on good terms with the team, he was perfect choice for the position.

“With coaching, there is such a big learning curve, and just like anything else, you can never stop learning,” he said. “I’ve tried to take aspects from some of my past coaches and apply them to my team.”

Jordan Pagani, who has been the team manager for four years, describes Mike’s coaching abilities on and off the field.

“On the field, he knows what he wants,” Pagani said. “He puts players in a good position to be at their best. Off the field, he’s very open with the players. He’s more than welcoming to listen to the players whenever they need help with something.”

Eventually, Gagliano moved on to become the head coach for the Algonquin Thunder team. He has held this position for the past three years. Outside of soccer, Mike has a day job, working for the federal government as a senior policy analyst.

In the months leading up to the beginning of the soccer season, he looks forward to getting to know the new team and doing practices with them. Marina Gagliano, his wife since 2013, noted his passion for the sport.

“What really impresses me about him is that he’s really passionate about what he does,” Marina said. “Soccer season doesn’t start until August, but in July, he’s already beaming because it’s just about to start, and he’s so excited for it.”

This year, the team went on to compete in Nationals. Connor Fraser, a second-year journalism student, spent some time with the team, and got to know Mike a bit.

“I spent about six days around him, and he’s a really friendly guy,” Fraser said. “But he’s also an all-business guy too, especially when it comes to the team.”

Gagliano considers himself a coach not only in soccer, but in life as well. He tries his best to reach the players on a personal level, as well as on a professional level.

Whenever he’s not working or playing soccer, he tries to keep himself busy with work around the house.

“He’s always looking for a new project,” Marina said. “He loves to stay busy, and is always trying to do little home improvements. He’s definitely not one to sit around and do nothing.”

In regards to the future, he doesn’t plan on leaving the soccer program at Algonquin anytime soon.

“I see myself being with the college for as long as I’m able,” Gagliano said. “I love the program, and I’ve taken so much from it that I’m happy to give back to it.”

Michael Gagliano has had a long journey to get to where he is today.

Every moment he has endured has led to his current position. Whether these moments are bad, such as when he didn’t make the team at Carleton, or good, like when he guided his team to victory against Centennial, they have shaped his life for the better.

Soccer has always been in Gagliano’s blood, and he has shown no signs of quitting.