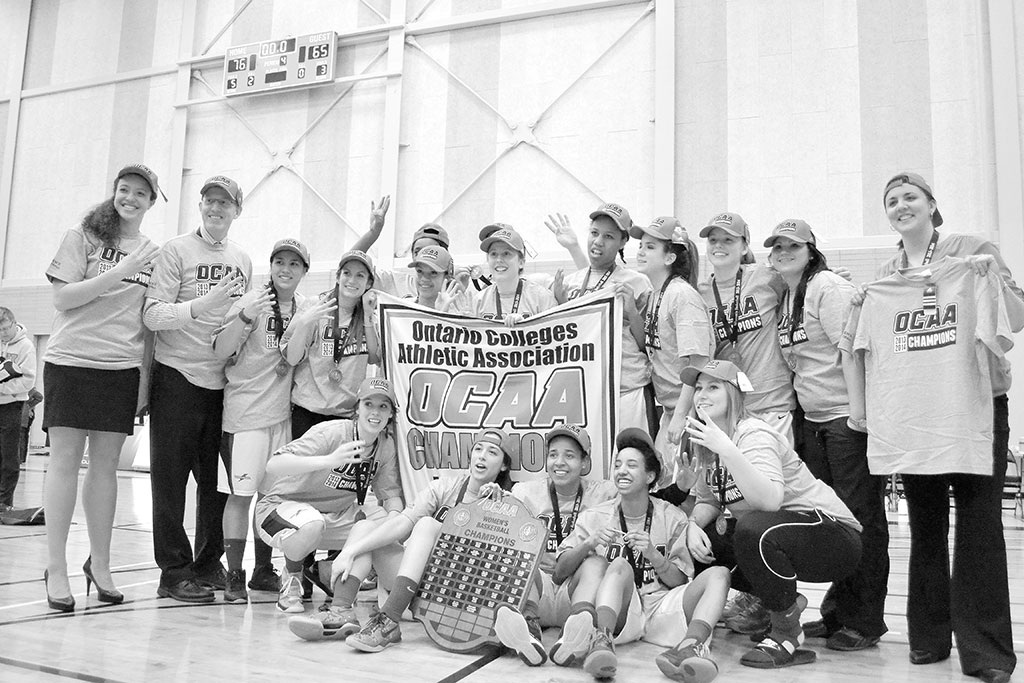 The Thunder women’s basketball team displays their newest OCAA banner following a victory over Mohawk. The team will compete in the national championship on March 13-15, in Montreal.

By Katie Dahl and Emma Rick-Hyde

They went in undefeated and came out record-breaking champions.

As the buzzer filled the gym, players and coaches flooded the court, dancing and chanting in celebration.

History was made when the Thunder women’s basketball team became the first to win gold four years in a row at the Ontario Colleges Athletic Association (OCAA) Championship, March 1.

“All weekend every member of our team played a part, and this depth and experience really proceed to be the difference in these championships,” said head coach John MacInnes. “We’re very happy with the result. No one’s ever done it.”

The final gold medal game saw the Algonquin Thunder beat the Mohawk Mountaineers with a final score of 76-65.

Despite being undefeated throughout the season, and returning as gold medal champions, the Thunder were anxious going into the final.

According to assistant coach Hannah Sunley-Paisley, they were nervous that history would repeat itself. When the Thunder began their gold-medal run four years ago, they had been playing against the Sheridan College Bruins, a team that had been OCAA champions three years in a row, with a home-court advantage.

But the Thunder managed to play with some of the best energy of their season, and were able to make history because of it.

“Those were some of the best 40 minutes of play we’ve had this season,” said Sunley-Paisley about the semi-final game. “It was probably our most consistent game from start to finish.”

During the final game, while the hometown crowd brought the noise, the Thunder brought their own.

“Our energy was high the whole time,” said point guard Kim Cupid. Forward Lindsay Whittaker agreed, adding that the bench played such a huge role in their spirit.

The Thunder took the game by storm when they took the first points, and continued with the theme of dropping outside shots and runs down the floor causing the Mountaineers to call a timeout, setting the score at 10-3 for Algonquin.

A steal by Thunder Jessica Basquin in the defensive end led to her taking the ball down the floor, finishing with the layup making the point spread 17-5.

Mohawk’s Rachelle Abella hit a three, causing the crowd to erupt in cheers. Thunder hit back with a three of their own in the second half by Claire Abbott.

“We knew we had to adjust to the reffing from the beginning, but we didn’t do that,” commented Sunley-Paisley.

Mohawk tried to push back in the fourth, but had little success other than a big three hit by Stef Hrymak. Although the Mohawks closed the gap to be behind by just 11 points they were unable to successfully battle the undefeated team.

The semi-final game saw the Thunder take on St. Clair College on Feb. 28, who they beat with a final score of 76-47.

With the Thunder showing strong defense, the Saints were unable to get shot off. The team was held to 21 points for a large part of the first half. The second half started slow for the Thunder who, although they were able to maintain the lead, remained scoreless for the first three minutes.

The Thunder continued with successful outside shooting and although they caused some turnovers, which resulted in a total of 15 points against them, they held a strong lead. The Saints only managed nine points in the final eight minutes of play.

Undefeated, Algonquin took down the Fanshawe College Falcons with a final score of 73-43 in the first game of the championship.

Despite the Falcons best efforts with defensive pressure, the 30-point lead Algonquin held was too much to come back from.

The Thunder were able to follow through with outside shots, and took the win to advance to the semi-final game.

“We have a good chance at winning nationals,” said fifth-year player and tournament MVP Sandre Bascoe. “I love these fools.”