You are here: Home / Sports / Women’s Thunder basketball squad hold their own at provincials 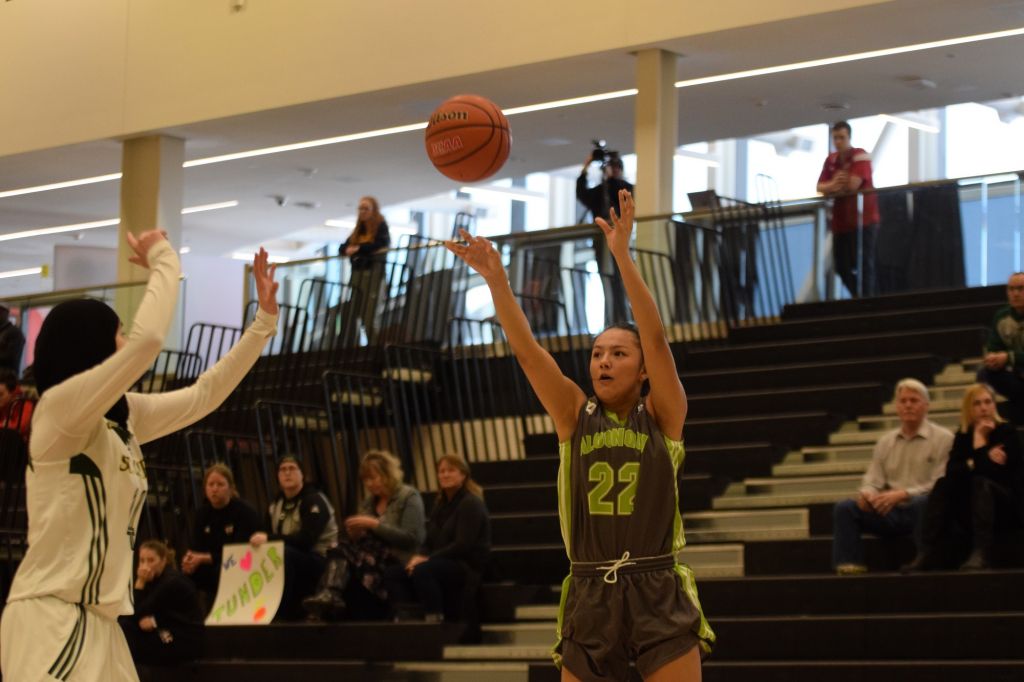 Down by 22 going into the fourth quarter, it looked all but over for the women’s Thunder basketball team Feb. 28 in their first game of provincials.

A late push against the St. Claire Saints saw the lead squander to single digits in the final frame, but that was as close as the Thunder got.

The women made their run a little too late for a comeback as the Saints controlled the better part of the contest through the first three quarters.

Coach Jamie McLean knows his team could’ve played better to start the game and looked forward to playing better in their net game.

The Thunder got dominated on the offensive glass – The Saints got many offensive rebounds – and allowed the Saints to have many wide open jumpers.

Saints player Jana Kucera dropped 35 points on 7-10 shooting from three. The Thunder had no answer for her in the game as it was apparent by the points they gave up to her.

The Thunder came out sloppy and fell down early in the first quarter by double digits and went into the second half down by a score of 46-35.

It didn’t get much better for them as they came out with the same lack of energy and determination they had in the first half.

They proved, however, that when they are playing Thunder basketball, they are a very hard club to beat. They cut the lead down to single digits and outscored the Saints 31-18 in the fourth quarter.

However, the hole they dug themselves early in the game was just too deep to climb out of in the end, ultimately falling to the Saints 88-79.

Rita Sibo led the way for the Thunder with 26 points and credited the team for making a run at the end of the game.

“At halftime, we decided we didn’t want to let this game go,” said Sibo. “We didn’t get the start we wanted so as soon as we finished our halftime talk we wanted to get right back into the game. We slowly chipped in; everyone contributed; after that, it was just a matter of stopping them.”

The Thunder next played against the Humber Hawks in their second game of provincials.

Since the women lost their first game, they were disqualified from the finals and would have to win this game to advance to the consolation matchup against the Sheridan Bruins.

The women struggled to find any shooting touch in the first half, but luckily for them, their opponents couldn’t find it as well, with the Hawks only leading 26-25 at the end of the half.

The Thunder exploded in the third quarter, pouring in 24 points in that quarter alone.

Their defensive intensity picked up and they were able to force many of the Hawks players to turn the ball over and make them second guess many of their plays.

The Thunder held the Hawks to just 20 points in the second half and put up 38 of their own, almost doubling their opponents.

Arianna Gagnon led the team with 21 points with all of them coming behind the arc – three-pointers.

“I knew they were going to face guard me,” said Gagnon. “I had to go off screens and try to get open.”

Her teammates seemed to try to get her the ball as much as possible as it was recognized that she had the hot hand throughout the game.

Coach McLean was impressed with the way his team bought into the game plan going into the second half.

“Defensively, we locked them down,” said McLean. “When you can hold a team like Humber to 46 points you got a pretty good chance of winning.”

The Thunder closed out the Hawks with the final score of 63-46, giving them an opportunity to play one more game in provincials.

“I think the girls came out today not knowing what to expect. Once we fought through that first half and realized we can take this, the girls completely bought into the second half game plan and played it perfectly to a tea.”

The women were set to play their final game of the playoffs, the consolation match against the Sheridan Bruins.

The Thunder held strong through the first quarter, only trailing by one point going into the second.

However, that’s as close as they got as the Bruins showed their prowess throughout the rest of the game.

They completely dominated the flow of the game and the Thunder were turning the ball over left right and center.

With the final score being an overwhelming 82-56, the Thunder ended their season not the way they would’ve hoped to.

The women had a fantastic season and hope to improve all off-season to come back better and stronger, seeing that most of the ladies will be returning for next season.

The Thunder hope to make it back to provincials next season, and potentially advance past and make it to nationals.

Women’s Thunder basketball squad hold their own at provincials Reviewed by Bradley Legault on March 1, 2019 .

Down by 22 going into the fourth quarter, it looked all but over for the women’s Thunder basketball team Feb. 28 in their first game of provincials. A late push against the St. Claire Saints saw the lead squander to single digits in the final frame, but that was as close as the Thunder got. […]

Down by 22 going into the fourth quarter, it looked all but over for the women’s Thunder basketball team Feb. 28 in their first game of provincials. A late push against the St. Claire Saints saw the lead squander to single digits in the final frame, but that was as close as the Thunder got. […]