You are here: Home / Sports / Thunder striker goes from Tripoli’s streets to stadiums 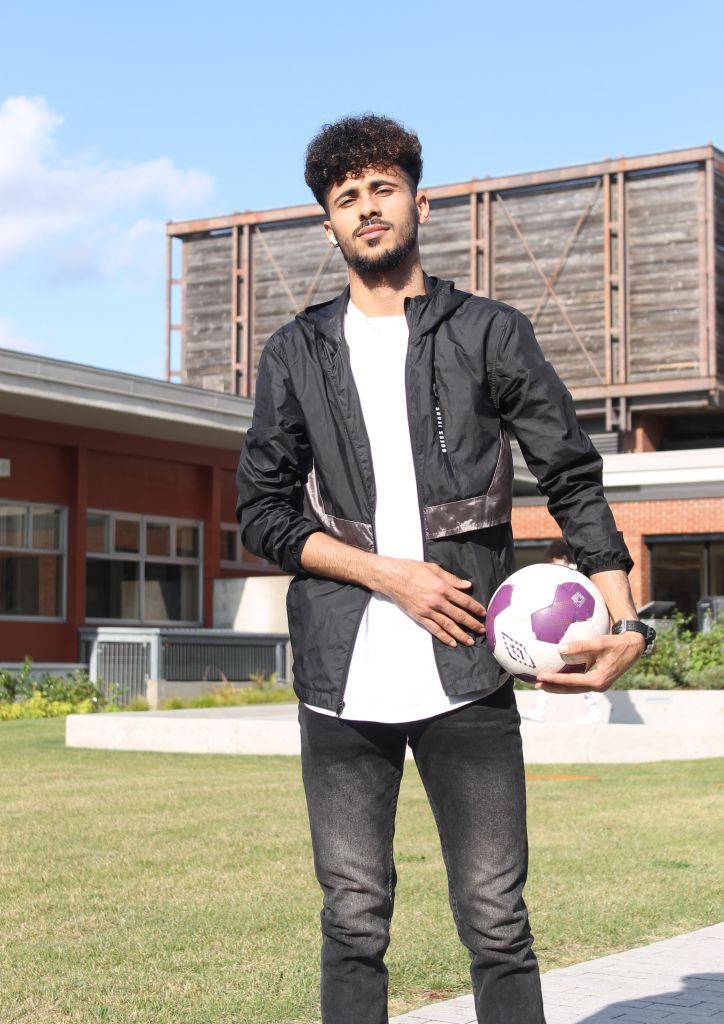 When Malek Belhaj was an 11-year-old growing up in Tripoli, Libya, he and the other kids in his neighbourhood would retreat to the gravel-covered empty lots between their houses to play soccer. They’d use piles of shoes to mark the goal posts. Or cardboard boxes – anything to get their games started.

His hobby has brought him success. Belhaj was the top scorer in the Eastern Division of the Ontario Colleges Athletic Association (OCAA) league in 2017, earning the Rookie of the Year title that season as well. This season, he yet again finds himself at the top of the scoring charts – having scored 10 in the five games played so far.

Soccer has been a passion for from the beginning. “Growing up everyone – my uncle, my little brother, everyone – around me was playing soccer,” Belhaj said in Arabic. “Even the TV was always showing soccer, so I decided to try it and I liked it.”

Mike Gagliano, head coach of the Thunder men’s soccer team, says Belhaj’s success comes from his work rate and his understanding of the game.

“He has this knack of knowing when to get to the front post and convert and he is very strong in the air,” said Gagliano.

According to Gagliano, Belhaj’s hard work and understanding of soccer, which he developed in Libya, is hard to find in players who were raised in Canada.

“Just last game, he intercepted a header that was meant for the other team’s keeper, went around him and scored,” Gagliano said. “I don’t know anyone else here that would do that.”

Gagliano says players in Canada acquire a different mentality when it comes to scoring goals. “They all want to play like they’re playing Fifa [soccer video game] and end up passing the ball into the net,” said Gagliano. “Malek is not afraid of shooting outside the box and he has a drive of winning the ball back when he loses it.”

Gagliano didn’t always think this way. In fact, Belhaj was close to being cut from Thunder in the beginning. During his first training appearances he put in lackluster showings. In the end, however, there was something that the coach found in him.

“We ran this set piece drill and he was getting every header, winning every battle,” said Gagliano.

Belhaj’s roommate, Raed Lagha, plays soccer with him recreationally and comes to watch his games. He has a different opinion as to what the striker’s best attributes are. “He’s really fast and he’s just like freestyling all the time,” said Lagha. “It feels like he’s always having fun with the ball.”

Whatever Belhaj’s best trait may be, his performances on the pitch contribute to the overall success of the team, as well as his teammates.

Ebrahim Al-Ariky, who plays midfield for Thunder, says Belhaj is key to his success. “I would have to give him the ball and he’s going to score,” Al-Ariky said. “That’s how I get my stats up.”

Despite all the goals he’s scored for Algonquin, the titles he’s received and the support from his coaches and teammates, Belhaj’s best soccer memory is still overseas. “My regional team beat this provincial team of players over 20 years old 3-0,” said Belhaj. “I was only 18.”

Libya’s civil war 2011 kept Belhaj from turning his passion into a profession over there. “When I was at the organized level there, I couldn’t travel far,” said Belhaj. “Out of fear of the war, I stayed close to home.”

He is now an ocean away from home, playing for Algonquin, learning the language, and raising much praise from peers.

When Malek Belhaj was an 11-year-old growing up in Tripoli, Libya, he and the other kids in his neighbourhood would retreat to the gravel-covered empty lots between their houses to play soccer. They’d use piles of shoes to mark the goal posts. Or cardboard boxes – anything to get their games started. Today Malek, now […]

When Malek Belhaj was an 11-year-old growing up in Tripoli, Libya, he and the other kids in his neighbourhood would retreat to the gravel-covered empty lots between their houses to play soccer. They’d use piles of shoes to mark the goal posts. Or cardboard boxes – anything to get their games started. Today Malek, now […]