You are here: Home / Sports / A Strong passion for the game 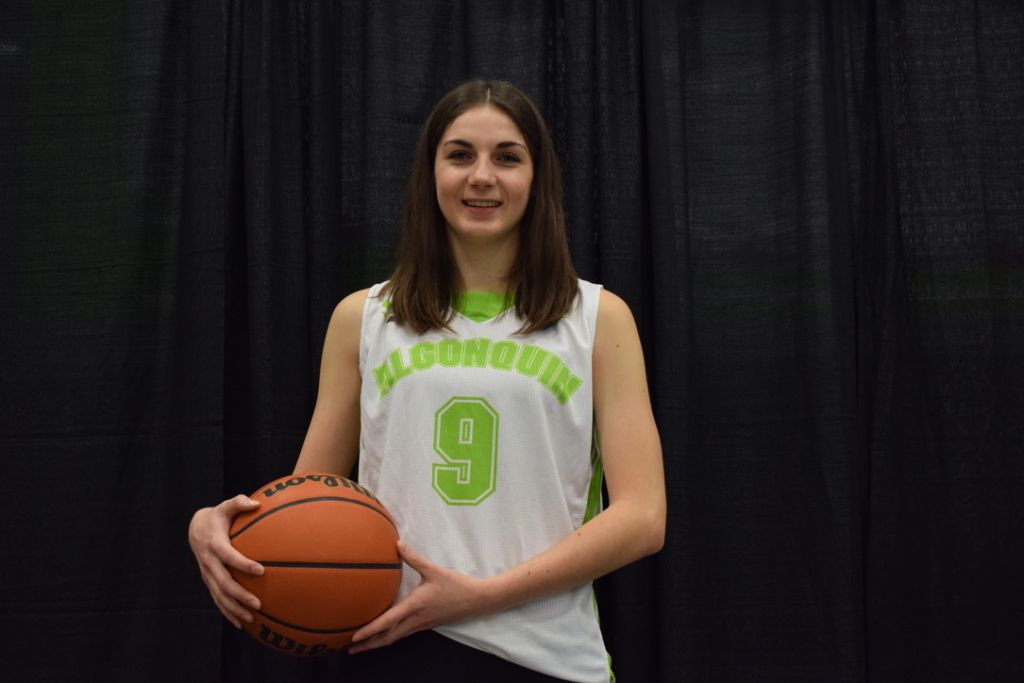 She looked up to see the ball traveling directly at her. There was no time for a reaction, no time to move. It hit her straight in the nose and forced her to return to the bench.

Her father, Brad Strong, pulled her aside and tended to the bleeding. Mere seconds passed before she told her father to put her back in the game.

At just nine years old, in a house-league game, she tried desperately not to miss a shift and return to the action.

“That was probably the last time she willingly comes off the court,” said Strong.

His daughter Sylvie is not your ordinary run-of-the-mill basketball player. She’s a fighter. She doesn’t know what the word quit means.

In her first year of playing post-secondary sports, she has been a vital player for the women’s Algonquin Thunder basketball team.

“She can shoot the ball,” said head coach Jamie McLean. “When she gets hot, she gets very hot.”

McLean coached Strong in grade 8, and against her when she was in high school. He was happy to hear she was looking at colleges and made it a point to reach out to her.

“I remember seeing her and coaching against her years ago. When I found out she was looking at colleges, it was a nice surprise and pick up for us.”

McLean has enjoyed the luxury of having the 18-year-old — soon to be 19 — come off the bench and stretch the floor for the Thunder.

He also sees where she can improve and excel in different aspects of her game, but mentioned that it will come with time and continuous work now and in the off-season.

“I see big potential for her. She’s got a great shot, able to get to the rim with her first step. I think she’s going to be key relief for us in the playoffs.”

Amanda Mitchell, who coaches for the U19 – under 19 – Wolverine Elite team coached Strong for around two years. She praised her hard work and dedication to the sport and knows that she has big potential for a player of her caliber.

“Hopefully, after her career at Algonquin, she can look at playing CIS somewhere.”

The Canadian Interuniversity Sport, now rebranded as U Sports, is the national sport governing body of university sport in Canada.

Mitchell started coaching her around three years ago and spotted her talent and knowledge for the game almost right away.

“She has an amazing basketball I.Q. for a kid her age,” said Mitchell.

Off the court, Mitchell expressed Strong’s passion for helping others.

Strong has always had a passion for the game. She played soccer and basketball growing up, but there was something about the 10 foot hoop that stuck out to her.

“We have a basketball net at the end of our driveway and it would be nothing for her to go out there and shoot, and shoot and shoot,” said Strong’s mother, Colleen Strong.

Strong could also be out in the gym shooting for hours and hours without stopping.

Her daughter has a personal connection with basketball many others do not possess. Some people like to read in their spare time; others like to knit.

Strong loves to hoop. It is her pastime.

“My basketball is my hobby,” said Strong.

Her father recognized her attentiveness and desire to play basketball at a young age. He coached her for the better part of her high school years.

He remembers the times where it was hard to get her to come off the court when she wasn’t playing in a competitive league.

“As a young kid, she was always afraid of losing her time on the court so she would push herself through most of the time,” he said.

Her passion for sports doesn’t stop at basketball, however. She is keen on helping people in the community through sports as well.

She works in the Algonquin gym as the control desk attendant and is taking the recreation and leisure program — a physical-education based course covering fitness, leadership in sports and recreation, and wellness in community development.

The charismatic teenager has always loved working with children and plans to be a teacher one day. Whatever she can do to help others, she strives to do.

“She’s very outgoing,” said Colleen Strong. “If she could do everything, she would do everything she possibly can. She’s just one of those kids: dedicated, determined and not afraid to step up to the plate and help someone.”

The Thunder’s successful season can be predicated on the chemistry built within the team throughout the year.

With only three players returning from last year — Desiree Groulx, Sydney Moorman and Sierra Peck — and the rest being their first, the team has blended as if they have been playing with one another for years.

“We connected really quickly at the beginning of the year and we became really close,” said Strong.

Two players for the Thunder, unfortunately, couldn’t return to the team for the second half of the season due to complications. The team has come together and grown from this situation, leading to success in the season.

Kiana Marghetis-Poliquin, one of Strong’s teammates, thinks that the incident has forced the team to come together.

“It has affected the team obviously because the team dynamic now is a little bit different. I still think we’re doing well; I still think we adjusted to it and we’re just getting used to the new dynamic and playing through that.”

This connection has brought the women all the way to the top of the standings, sitting atop at first place in the Eastern Conference.

Marghetis thoughts on Strong reflect the team’s as well. She is happy with how well she has been playing this year and loves the energy and positive attitude she brings at all times.

“She’s a good spirit on the team. She has good vibes and she’s always there to support you and encourage you. She encourages me and makes me a better player.”

Strong has dealt with many injuries throughout her very short career. She’s persevered through most — if not all — of them and continues to beat the odds to this day.

She came off a back injury in her last year of high school, as well as battling through an eye injury and a concussion early on in the season.

Her intense passion for the game pushes her to improve her strength, conditioning, basketball skills and mental toughness.

“She dealt with them pretty well. I know when I played with her — a couple years ago — she had some back issues and she didn’t play for four months for one of our seasons,” said Marghetis. “She’s been through a lot of injuries and she’s come back pretty well from all of them.”

With the playoffs just around the corner and the focus now on the post-season, coach McLean knows Strong can make key contributions for the squad.

“She’s had a lot of growth this year. She’s had to push through a lot of frustration in terms of injury and finding her rhythm again. It’s going to be exciting to see what she can do for us in the last few games of the season going through playoffs.”

With her sights set forward and head held high, Sylvie Strong looks to continue her improvements on and off the court.

With all the injuries, the setbacks, the loss of teammates and added school stress she’s had to deal with this year, there’s no better word to describe her will and determination throughout it all: Strong.

A Strong passion for the game Reviewed by Bradley Legault on February 14, 2019 .

She looked up to see the ball traveling directly at her. There was no time for a reaction, no time to move. It hit her straight in the nose and forced her to return to the bench. Her father, Brad Strong, pulled her aside and tended to the bleeding. Mere seconds passed before she told […]

She looked up to see the ball traveling directly at her. There was no time for a reaction, no time to move. It hit her straight in the nose and forced her to return to the bench. Her father, Brad Strong, pulled her aside and tended to the bleeding. Mere seconds passed before she told […]