We need affordable school and we need it now 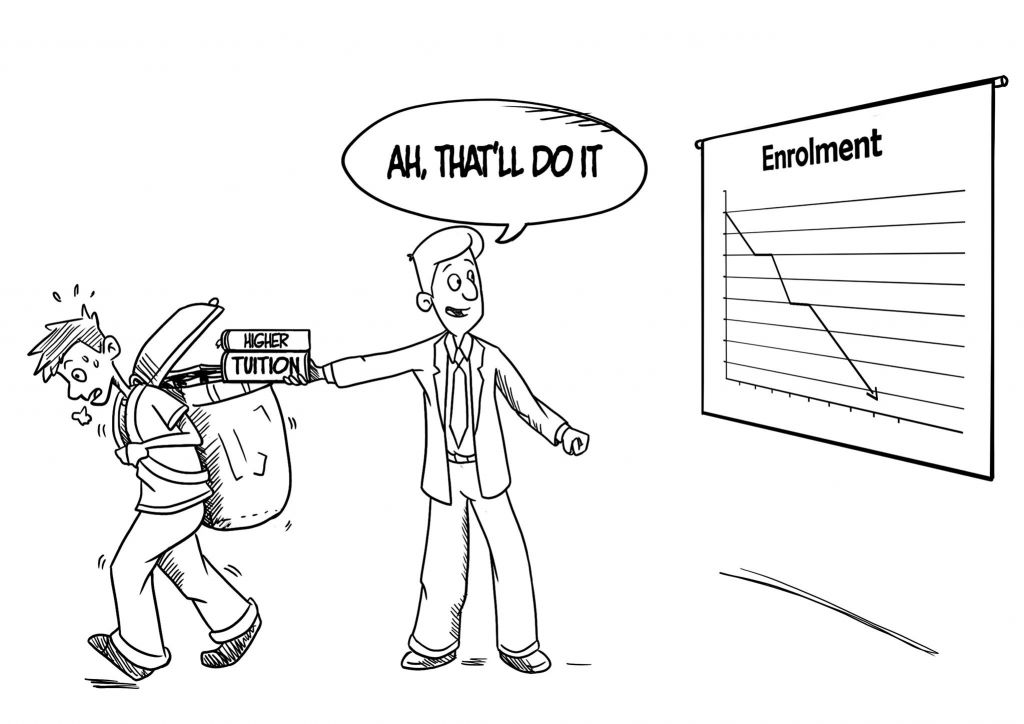 The price of education is on the rise and students are paying for it with more than just money.

There are direct correlations between finances and mental well-being. With tuition increasing by the year, it should come as no surprise that student stress has become a real cause for concern. Just as our last issue’s look at mental health among Ontario post-secondary students confirmed, we’re in a real “crisis.”

In a study of Ontario post-secondary students from spring 2016, 40 per cent of students said finances were “traumatic or very difficult to handle” over the last 12 months.

And the stress is not showing any signs of stopping.

So low enrolment leads to higher tuition, adding to students’ stress levels. With increased tuition, fewer students will be able to afford school – causing the enrolment to drop even lower.

The Ontario government provides most of its funding for post-secondary schools on the basis of enrolment. The higher the intake, the more a college will receive.

But when enrolment numbers are down, the colleges need to find their own solutions.

It’s a vicious cycle. And it’s only just beginning.

The headline of a National Post article in May 2016 put it simply: As student debt climbs to an average past $25K, schools invest in battling the mental-health issues it causes.

The article mentions that undergraduate students currently pay 40 per cent more for tuition than they did 10 years ago. The same story says that tuition increased by three per cent in the last year alone.

The Canadian Federation of Students reported that at “their current rate of increase, tuition fees are estimated to exceed all other student expenses combined in five years.”

But that’s only the financial burden.

In a recent study of Canadian post-secondary students, it was noted that the top three stressors are academics, finances and sleep difficulties. These stressors are unquestionably linked to one another and will not be reduced anytime soon. Students’ academics will begin to suffer, as cuts are made to teaching staff who the college will no longer be able to employ due to financial difficulties.

The answer is not simple, but change will not occur without an interruption to this daunting reality.

Something needs to be done.

OSAP will be offering free tuition and increased student grants to select mature students starting next fall, in hopes that a greater mature student population might arise. The idea is that this will make up for the dwindling numbers of younger students enrolling.

But this is not sustainable.

While handing out free tuition may seem like a viable solution, it would only create more challenges. There is no assurance that the students receiving free tuition would actually stay enrolled. Or, alternatively, we could end up with an overflow of admissions.

And let’s face it. Free tuition comes at a price.

The funds can only go so far, which could result in students picking programs that are less expensive than others. Having their tuition paid for may also lead to students taking excessive time to finish their programs.

Essentially, offering free tuition would lead to a culture of underachievers.

It would be easy to blame the college, OSAP or the higher-ups of our school. But since the problem is more complicated than most realize, we must seek a deeper answer.

The stress students are enduring and will continue to face is rooted in the government funding for the education system of our province. Because the funding is heavily weighted on the basis of enrolment, it would be very difficult for the college to pull itself out of a deep pit.

Instead, the funding should look to the school’s potential – its graduate success rates over time, the necessity for training in specific fields and so on. Then, the colleges will be able to organize itself and continue delivering quality education.

In turn, this would lessen the burden of increased tuition and low-quality education for students. Affordable education will then lead to decreased levels of stress, less financial difficulties and improved mental health.

This may be a simplistic solution. But while the fight for answers was initially between the provincial government and the colleges, the students are the ones paying the price for their messy ways.