You are here: Home / Opinions / The unfamiliar drive home to New Brunswick during the pandemic 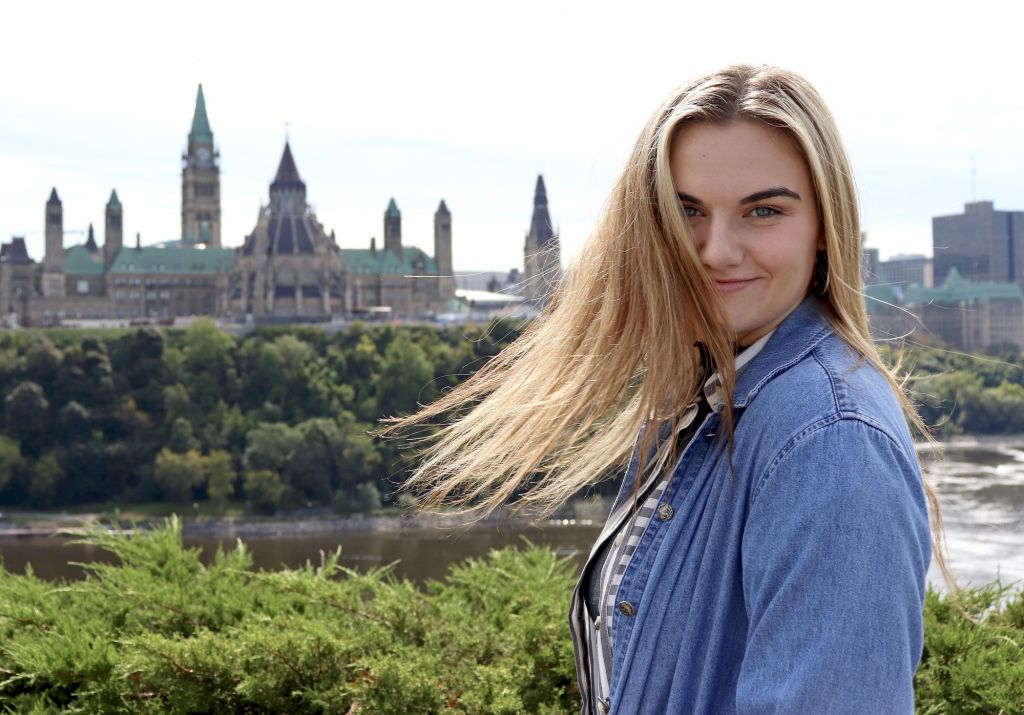 The author, in non-COVID times, in one of the two places she calls home. Photo credit: Chanelle Pinard

If you’ve ever passed a transport truck on the highway you know the feeling. It’s as if you’ve shrunken down and are racing past a giant.

You can imagine then the feeling of being permanently shrunken on a road with only your vehicle – in our case, the mid-sized 2020 Mitsubishi Outlander – and a dozen giants. There are only a few instances during which that happens. At 2 a.m., as the giants are only starting their delivery or, as I’ve come to learn, during a global pandemic.

At 6 a.m. on March 27 my boyfriend, Sebastien Brun, a University of Ottawa engineering student, stepped on the gas on a narrow stretch of the 417 in Ottawa. We were setting out on the long road home to New Brunswick. The city faded into our mirror and a pink sky started to peek through the dark morning.

In front of us, an electric road sign blinked orange and yellow. When we drove past it, it read “Stay Home.” A strange feeling came over the both of us as we became painfully aware that we were breaking the rules. In truth, we were trying to get from one of our homes, to the other, where our families anxiously waited.

Our decision to move back had been made two days earlier, on March 25, when New Brunswick Premier, Blaine Higgs, announced that non-essential travel would be banned after the confirmation of the province’s 26th case of COVID-19.

The province would conduct checks at the Quebec, Prince Edward Island and Nova Scotia borders to make sure non-residents travelling to shop or socialize would be turned around to stop the spread of the virus. There had already been 1,324 confirmed cases in Ontario as of March 29.

We knew then it was time for us to start packing.

Our first pit stop for gas in Rigaud, Que. served as a reminder that we weren’t alone – it was one of the first times we’d seen a human since our trip began.

The man approached me as I went to open the locked gas station door. “Did you ring it?” he asked me in French. He pointed to a make-shift doorbell with a sign that read: “No more than 5 customers allowed entry at a time. Please ring the bell.”

“Ring or they’ll never let you in,” he said almost as if I ought to know.

Our plan had been to come home at the end of April. Our exams would be done, and our parents would take a sunny weekend to drive up, move our year into a van, and drive us home. We probably would have made too many stops for junk food, turning the 12-hour drive into a 14-hour one. We would have fallen asleep a few times, waking up to someone laughing so hard the cars passing would have looked at us funny. That’s how the long drive from two places we called home became so familiar.

About seven hours into our trip, the part I thought would be familiar was coming up – the New Brunswick border. It is an invisible line for most people. But for us, it usually feels like we were crossing into thinner air, bushier trees and a comforting ease. This time, it didn’t come with the same feelings.

The highway was blocked, and orange traffic cones led cars to what was supposed to be a rest stop. Yellow caution tape divided two lanes and led to white tents flapping in the wind. The van ahead of us stopped as a man with a clipboard approached the window and slowly checked things off his papers. A police car faced the lineup on the other side of the tents. In front of it, a man with a mask took note of license plates. 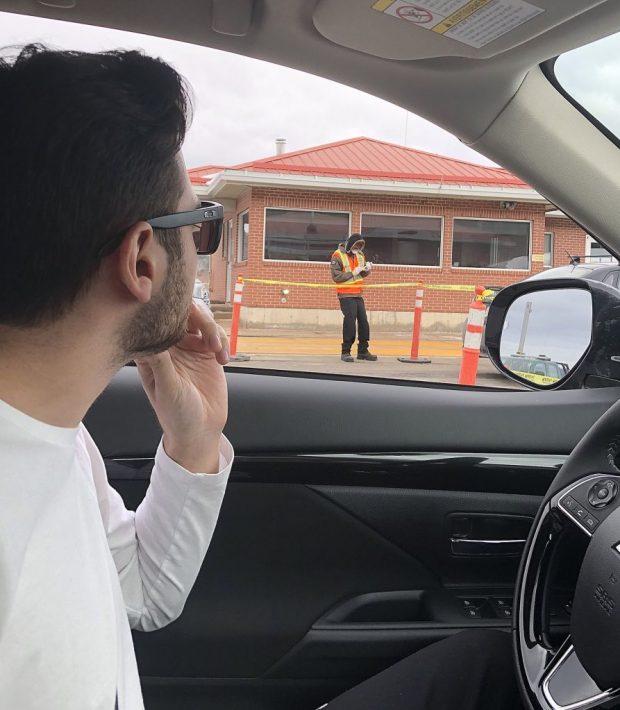 In our car, Sebastien Brun and I watched as an officer took-note of license plates of cars stopped at the Quebec and New Brunswick border as part of safety measures to stop the spread of COVID-19. Photo credit: Katelin Belliveau

Sebastien went over what he figured the officer would ask, making sure we had our ducks in a row. He tends to over-analyze things when he’s nervous. I was sure in that moment that there was no reason for us to be denied entry. How can you be turned away from your home?

The officer looked us up and down, beginning his laundry list of questions. He asked if we’d been out of the country, if we’d been around anyone with symptoms and if we were prepared to self-isolate for fourteen days. Then he took our phone numbers. “They will be checking up on you, just to give you a heads up,” he said.

Passing the border, I felt relieved but unsettled. The air didn’t seem thinner, the trees didn’t seem bushier and I certainly didn’t feel at ease. Even though we were heading to a place we called home, it seemed we could no longer depend on what we knew. At least, not for a while.

Five hours later, we were in Shediac.

The town seemed gray when we got there. It had lost its usual charm. The businesses that kept it going went dark and open signs were no where to be found. The park lights were off and there wasn’t a lineup at the local barbershop – probably for the first time in years.

The daycare on the main road was quiet, its kids were tucked away at home. But in its front window, a bright-colored rainbow stuck out at me.

It was the same rainbow I’d seen in the windshield of an orange van we’d past in Quebec, and in the back window of a white car we’d past in Ontario. I had seen it on a trailer on the side of the highway and in a Tim Hortons’ front window at one of our stops. 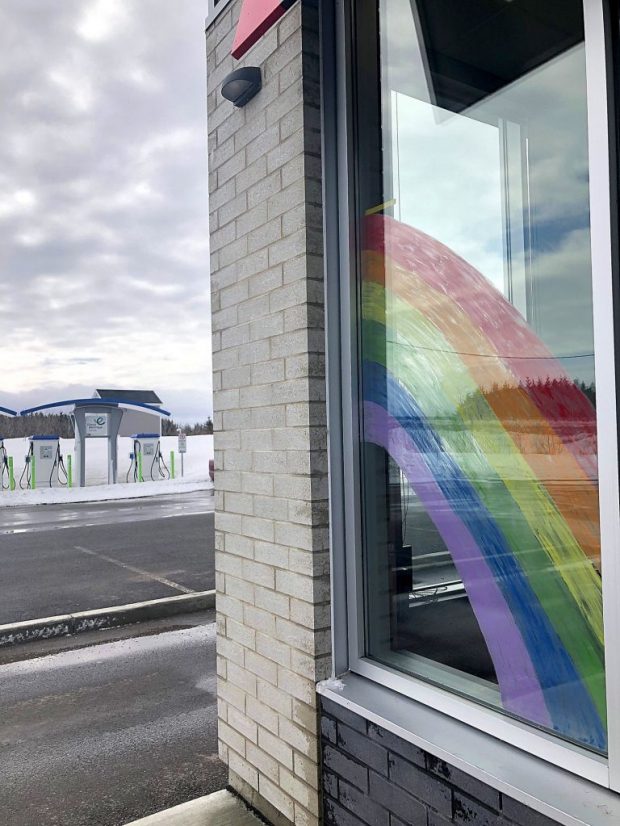 A bright rainbow was painted in the window of a Tim Hortons in Montmagny, Que. Photo credit: Katelin Belliveau

In some cities, the recent trend of hanging rainbows in windows is meant to thank healthcare workers on the front lines. In others, it is simply to remind people that everything will be okay. It was a sight of hope and encouragement that had spread across towns, cities and borders.

I felt at ease again.

The unfamiliar drive home to New Brunswick during the pandemic Reviewed by Katelin Belliveau on April 7, 2020 .

If you’ve ever passed a transport truck on the highway you know the feeling. It’s as if you’ve shrunken down and are racing past a giant. You can imagine then the feeling of being permanently shrunken on a road with only your vehicle – in our case, the mid-sized 2020 Mitsubishi Outlander – and a […]

If you’ve ever passed a transport truck on the highway you know the feeling. It’s as if you’ve shrunken down and are racing past a giant. You can imagine then the feeling of being permanently shrunken on a road with only your vehicle – in our case, the mid-sized 2020 Mitsubishi Outlander – and a […]