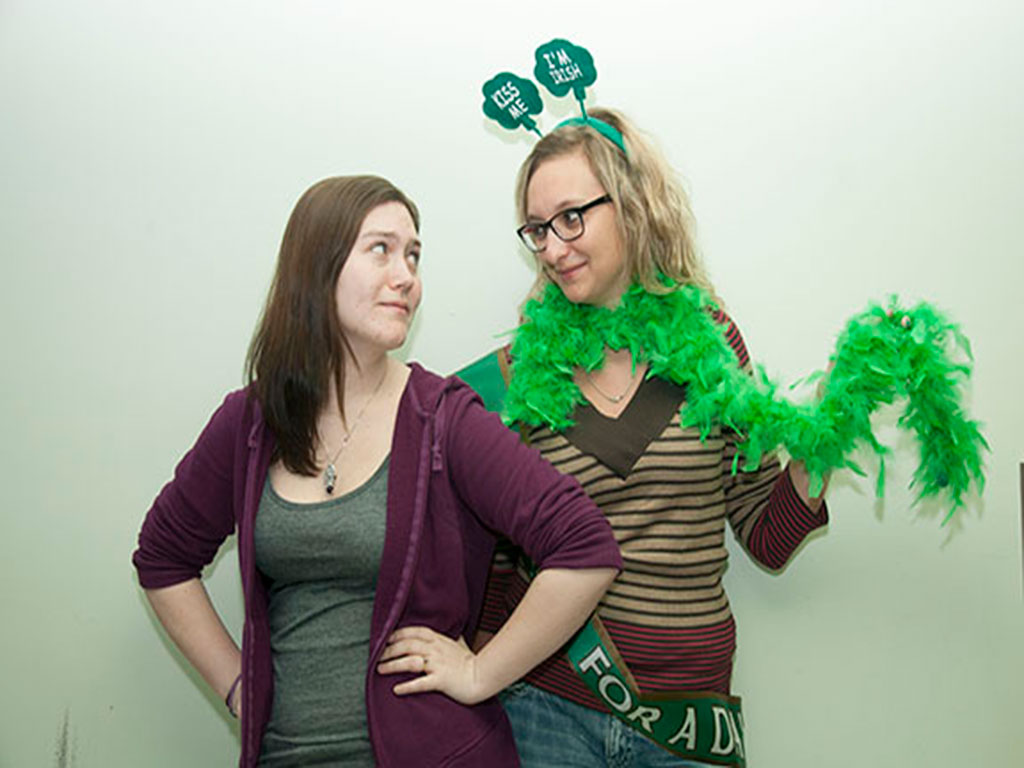 Algonquin Times reporters April Luesby and Jessie Archambault battle it out in a festive point-counter-point.

No shams, rocking for the Irish only

As a person who is neither Catholic nor of Irish decent, I have no idea what St. Patrick’s Day is, except an excuse for people to wear green and get drunk.

I have never celebrated the shamrock-covered holiday because of these reasons. Why would I celebrate the life of a saint I don’t know or care about?

But why do people wear green, get drunk on St. Patrick’s Day anyway? I thought saints were people who never indulged in vices like alcohol, so how did people begin this tradition of celebrating this guy’s life by drinking?

I was curious, so I researched the holiday and the saint to find out more. Turns out, some of our current traditions to celebrate the life of St. Patrick are not what they used to be.

St. Patrick is best known for driving the snakes out of Ireland. And while it is true there are no snakes in Ireland today, it is likely that there never have been.

It is most likely that these “snakes” were actually the Druids he encountered at Tara and by “driving them out” he was really putting an end to their pagan religious ceremonies. And although we’ll never know how he accomplished this, we can guess how it might feel to have a stranger suddenly show up and tell you to stop believing in something your family has believed in for centuries. Is this really something we should celebrate?

And there’s much more that Saint Patrick did that not many people know about. Like his colour isn’t actually green, it’s blue. So where did this dressing up in green come from?

After I learned so much about why the holiday originated, I had less respect for how it is now celebrated.

Maybe everybody should learn what they holiday is about. Perhaps people would celebrate differently if they knew what the holiday was really about and who St. Patrick was.

If you’re not Catholic, you wouldn’t celebrate Easter. So why would you celebrate St. Patrick’s Day if you’re neither Catholic nor Irish?

For whatever reason, the meaning of the holiday — to celebrate the life of a man who converted many Irish pagans to Christians — has been lost. There’s more to the holiday than just drinking and wearing green.

Pour some more green beer on me

I have two words to those of you who, like my fellow columnist on this page, condemn St. Patrick’s Day drinking and partying.

For example last year, I remember going out for a St. Paddy’s breakfast with my two roommates. We enjoyed eggs, potatoes and bacon with a traditional pitcher of green beer. The pub was packed, the beer was flowing and the bar top was already stained with green dye. Almost everyone was wearing green and chanting traditional drinking songs like The Rovers’ Wasn’t That a Party.

The celebrations were just beginning as the clock showed 11:10 a.m.

So what was it that attracted my friends and I to indulge at such an early hour? Simply put – the Irish tradition.

The holiday is now best known as a fest filled of alcohol intoxication and debauchery that is celebrated in most Anglo-Saxon countries. Some may think the drinking part of the festivities is a fairly new tradition; however, history shows that it’s been there all along starting with St. Patrick himself indulging in whisky.

St. Patrick loved his whisky. One day at an inn he was served only a half-cup of the now popular Irish liquor. Unimpressed, he told the innkeeper there was a devil in the basement feeding on the man’s selfishness.

Some time later, St. Patrick went back to the inn. This time, he was served a full cup – the devil was gone. Now, whisky is a must-have on the saint’s feast day. Thus, we shall drink it too.

Feast day comes from the tradition of celebrating the saint’s life at church and then, gathering for food and booze.

St. Patrick allegedly used the three-leaf clover, the shamrock, to explain the theory of trinity –  the Father, the son and the Holy Ghost – to poor Irish farmers, which is why it is now widely worn in one way or another on his feast day. But, let’s not confuse the shamrock with the “lucky” four-leaf clover.

Who said history had to be dry?

Certainly not Canadians who enjoy drinking their green beer and having their teeth stained for the rest of the day.

We drink. We party. I don’t particularly care about famous Irish symbols. They seem a little tacky and remind me of nightmares about leprechauns.

But it’s easy for all of us to become Irish on March 17, even if like me, you look more like an Eastern European than a ginger. So just wear a bit of green, have a shamrock somewhere on your outfit and drink until you truly believe you are of Irish descent. Happy St. Paddy’s day!

By: April Luesby No shams, rocking for the Irish only As a person who is neither Catholic nor of Irish decent, I have no idea what St. Patrick’s Day is, except an excuse for people to wear green and get drunk. I have never celebrated the shamrock-covered holiday because of these reasons. Why would I […]

By: April Luesby No shams, rocking for the Irish only As a person who is neither Catholic nor of Irish decent, I have no idea what St. Patrick’s Day is, except an excuse for people to wear green and get drunk. I have never celebrated the shamrock-covered holiday because of these reasons. Why would I […]